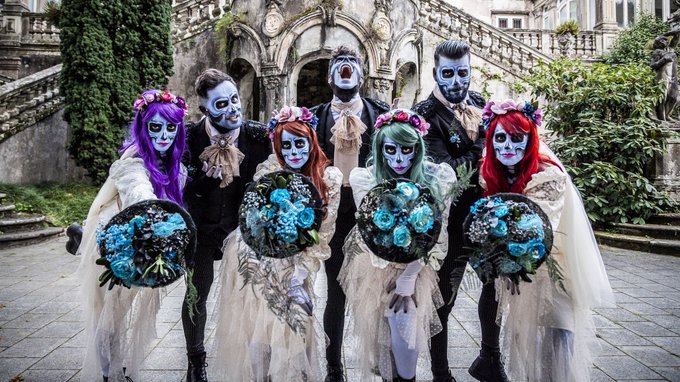 I closed Drink to Santa Clara Vanguard playing 'The Phantom of the Opera' for a drum corps Halloween by telling my readers to "stay tuned for more Halloween posts through the rest of the month. Trick or treat!" For today's installment, I'm sharing this year's latest Halloween special from Spain's Broken Peach, Corpse Bride - Remains of the Day (by Broken Peach).

Song written by Danny Elfman for Tim Burton's Corpse Bride film!
For more, here's Broken Peach - Remains of the Day (Behind the Scenes).


This song hearkens back to Broken Peach's first Halloween special, which I wrote about in Broken Peach sings to update holidays from the back catalog for the ninth year of Crazy Eddie's Motie News.

As I promised, here it is.


Broken Peach has one more video of this song that I haven't shared yet, Broken Peach - This is Halloween (Official Audio) and it has the best description of all the band's clips I am using today.

"This Is Halloween" is a song from the 1993 film The Nightmare Before Christmas, with music and lyrics written by Danny Elfman. In the film it is performed by the residents of the fictional "Halloween Town", which is the film's main setting, and introduces the town's Halloween-centered lifestyle.

Broken Peach has more new videos of their old songs to share, but I'm being a good environmentalist and conserving my resources, so look for them next year, should I live so long. It is the time of year to think about that possibility and the pandemic has made that even more salient. As I wrote yesterday, "this is still a doomer blog, even when I can't be all DOOM all the time."

Finally, it wouldn't be a good musical holiday post of mine without a themed drink, so enjoy Jack and Sally: Nightmare Before Christmas Inspired Shots | 31 DAYS OF HALLOWEEN from Secret of the Booze.

Jack and Sally are the most adorable of Halloween couples. In past episodes we make the Pumpkin King shot which honors Jack Skellington. Since we are re-making the drink we figure this one would also include his stitched up lady.

Each day we are creating a new drink for 31 days of Halloween inspired by iconic characters that go bump in the night.

INSTRUCTIONS
Combine pudding and liquid in a shot glass. Mix until well combined.
Refrigerate for 30 minutes.
Top with whipped cream and a piece of candy corn.

INSTRUCTIONS
Combine pudding and liquid in a shot glass. Mix until well combined.
Refrigerate for 30 minutes.
Top with whipped cream and a piece of candy corn.

Drink responsibly and stay tuned for more Halloween posts through the end of the month. Trick or treat!
Posted by Pinku-Sensei at 11:43 AM