the Vice-Presidential debate was last night, it's time to do for it what I did for the Presidential Debate, have late-night comedians react to it. I begin with The Late Show with Stephen Colbert asking Like Flies On What? Stephen Colbert Goes LIVE After The Pence-Harris VP Debate.

Stephen Colbert goes LIVE with reactions to the high-stakes Vice Presidential debate between Sen. Kamala Harris and VP Mike Pence, where both candidates dodged questions and a tiny uninvited guest ran away with the show.

Yes, fly jokes were the theme of last night's commentary. I couldn't resist making fly jokes myself, leaving the following comment on the video: "666 dislikes? Did I ever watch this video at an opportune moment when it comes to 'The Lord of the Flies!' Also, 'a younger country with bigger Alps' [than Germany] — Slovenia qualifies!"

After helping Sen. Kamala Harris prepare for the VP debate by playing Mike Pence, Mayor Pete Buttigieg offers insight about what it took to get into the mind of the vice president. Check out Mayor Pete's new book, "Trust: America's Best Chance."

I don't feel bad about making a fly joke after hearing Mayor Pete make one, too. He and Colbert got a lot more serious about both the debate and President Trump having COVID-19 and the disease spreading in the White House in the rest of the first half of the interview. The second half was not about the debate, so I'm moving on to Jimmy Kimmel's reaction to the debate in his monologue Jimmy Kimmel Breaks Down Pence Harris VP Debate.

Kimmel couldn't resist making fly jokes, either, nor could the person who put the chyron on the video clip. "That fly tho." LOL. On the other hand, Kimmel hit the right note when he told his audience to "enjoy your nightmare" until the vaccine arrives, which Trump has promised will be "very soon" for months now. I know better and so should my readers. My favorite checker at the grocery store asked me in March, "when do I think things will return to normal?" My response was "spring of next year, when a vaccine becomes available." I still think that's the timeline.

Billy talks about the Vice Presidential Debate between Kamala Harris and Mike Pence, his Alexa acting up, the amazing way he celebrated his 50th wedding anniversary, meeting several presidents over the years, and joining with lifelong Republican Bill Kristol to get seniors out to vote in Florida.

Billy Crystal thought Pence was boring. Join the club. He had a better reaction to his namesake, Bill Kristol, and to George W. Bush. I appreciate Crystal's story about Bush Senior catching an error in a film about baseball. Bush was (and his son is) a left-hander, so he would notice. As the son and father of left-handers, I'm quite aware of this sensitivity. As for Kristol, I'm always a bit leery of being on the same side of an issue with him. He has a reputation of always being wrong. I hope he isn't this time.

FiveThirtyEight's liveblog panel couldn't resist making fly remarks in their mock headlines that concluded What Went Down During The Vice Presidential Debate.They mentioned the fly in four headlines, the dullness of the debate in three including one that also referenced the fly, dodging questions in two, and not committing to a peaceful transfer of power in one. I think they have the significance of the topics reversed.

I close with this merchandising from the Biden-Harris campaign. 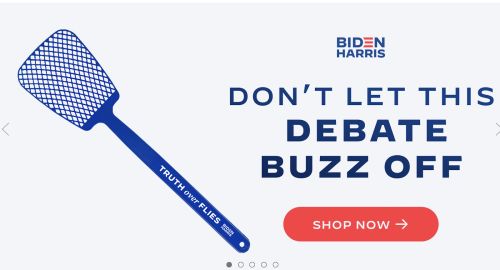 They couldn't resist making a fly joke, either. Looks like I'm in good company. Oh, and the fly swatter sold out almost immediately. LOL.
Posted by Pinku-Sensei at 12:11 PM