Hurricane Delta sets new records by being the tenth named tropical system to make landfall in the mainland U.S. in a single season 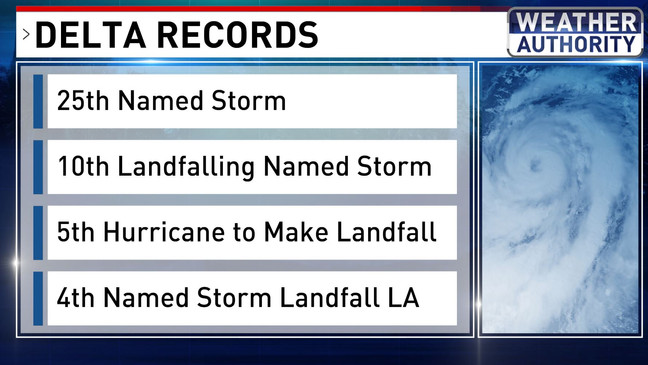 I listed some of the records made when Tropical Storm Beta became the ninth named storm to make landfall in the U.S., tying a century-old record.

Not only is Beta the first Greek-letter tropical system to make landfall in the U.S., it is the ninth named tropical system to make landfall in the U.S., tying a record that dates back to 1916, more than a century ago. As Tim Pandajis pointed out, the 2020 hurricane season still has nearly two months to go and a very active season like 2005 and 2020 could produce storms in December or even January, so that record could easily fall and 2020 would set a new record. That would be very on-brand for 2020.

As I expected, all the records that could be were broken when Hurricane Delta made landfall last night. It is now the earliest 25th named Atlantic tropical system and the tenth named tropical system, fifth hurricane (ninth if one counts pre-landfall conditions), and first hurricane designated by a Greek letter to hit the U.S. mainland in a single season, all records. CBS This Morning uploaded two clips to its YouTube channel this morning mentioning the records, including a new one, fourth named storm to make landfall in Louisiana in a single year, and showing the destruction from this storm as well as some left over from Hurricane Laura. I begin with report that opened this morning's broadcast, Delta downgraded to tropical storm as it batters Louisiana.

Heavy rain and strong winds are again pounding coastal Louisiana and portions of Texas and Mississippi after Hurricane Delta became the tenth named storm to hit the U.S. mainland in 2020. While it was downgraded to a tropical storm overnight, Delta still carries danger as it moves slowly inland with winds of about 45 miles per hour. Mireya Villarreal reports from hard-hit Lake Charles, Louisiana.

"It's 2020, what else?" Reverend, I agree with you and think it's as good a coping mechanism as any, but wish you wouldn't ask. It can still get worse and there are two and two-thirds months left in the year for it to do so.

CBS This Morning continued its coverage in At least 600,000 people without power after Hurricane Delta landfall.

Heavy rain and strong winds are again pounding coastal Louisiana and portions of Texas and Mississippi after Hurricane Delta made landfall Friday evening. It has since been downgraded to a tropical storm, though the system has left more than 600,000 people without power. David Begnaud reports from Lafayette, Louisiana.

It must be quite a shock returning to your home town to cover a disaster there. I imagine it would one step above finding out that the house where I grew up was under mandatory evacuation orders for a wildfire. As I wrote in August, "I saw the damage up close in January 2019, when my mom and I drove from her California house to the sea and back. Once we hit the burnt area, we didn't leave it until we got to Malibu; the fire burned all the way to the coast. I was astounded. It's one thing to watch the news reports; it's another to see it up close and in person." I had never seen so many burned hills and canyons up so close in Southern California and I grew up there and lived there for 30 years!

Both of the CBS This Morning clips showed plenty of damage, but I have one more to share from The Hill, HURRICANE DELTA: Video shows heavy damage after storm's landfall. The remarkable part begins at 1:29.

CBS This Morning showed plenty of damage, but the middle third of this video captured destruction that program didn't, a house completely blown over and another building with its roof completely removed. Wow!

Of course, there is a "so what" question to be answered, which Dr. Katharine Hayhoe and The Years Project did in Did Climate Change Cause This Hurricane?

Whenever a big storm like Hurricane Douglas or Hurricane Hanna hits, one of the first questions everyone wants to know is 'Was this latest hurricane caused by global warming – or not?' Climate scientist Katharine Hayhoe answers this frequently asked question about global warming.

No, climate change didn't cause this hurricane, although it did likely make it worse (it might have only been a tropical storm when it hit, for example). That's a point I've made more times than I can count, most directly in Vox on hurricanes, climate change, and storm surge, where I embedded two Vox videos on the connection between climate change and hurricanes. I recommend my readers click on the link to that entry and watch the videos, then think about how much of this year's weather-caused destruction didn't have to happen, just like they should think about how many deaths from the COVID-19 pandemic didn't have to happen, either. If they are in the U.S., then they should vote accordingly.

I have one final image for my readers, a graphic showing all ten landfalls so far this year. 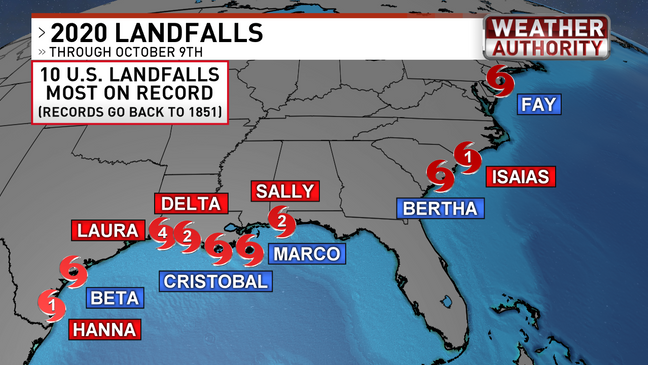 That's it for today's serious news. Stay tuned for the Sunday entertainment feature, where I plan on continuing my coverage of the Emmy Awards.
Posted by Pinku-Sensei at 1:54 PM