"I'll see if I can do something more focused on television as a whole later this week. Stay tuned." That's how I closed 'SNL' presents its own version of the dueling town halls plus Weekend Update's take on the week's news, but it took a full week to get to one, an update on the winners of the Emmy Awards focusing on "Cheer."* I begin by looking at a different awards show first, the 2020 Television Critics Association Awards.

The only reason I'm including this category is that "Cheer" "follows the cheerleaders of Navarro College as they prepare for the biggest moment of their lives." Navarro College "is a public community college in Texas," so it takes place at a local government institution. Again, public education is a function of government. Because this show has six Emmy nominations, I know now which genre I'm covering next in my Emmy nominations series — reality TV. On the other hand, I don't know which of the nominees will win.

"Cheer" did: "Netflix’s college pep squad profile Cheer landed Outstanding Achievement In Reality Programming." I had no idea then, but after I wrote 'Cheer' leads unstructured reality program nominees in a field that recognizes diversity, I had a better idea it could. 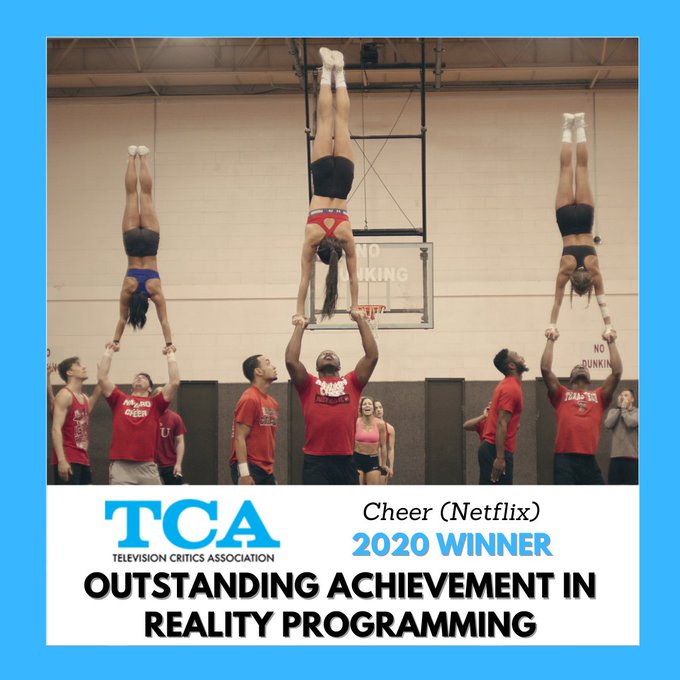 "Cheer" itself features a very diverse cast, although it's their unity of purpose and what they are willing to do to achieve it that's most important, not their diversity. "Kevin Hart: Don't F**k This Up" follows a famous African-American comedian who runs afoul of another dimension of diversity, one important in both "RuPaul's Drag Race: Untucked" and "We're Here," which explores LGBTQ+ identity. The least diverse show is definitely "Amy Schumer Learns to Cook: Lunch Break and Pasta Night" but gender still counts. It's also a program that grew out of the pandemic, as Schumer is cooking at home. That's one of the reasons the field looks so different from last year.

Another is that last year's winner United Shades of America with W. Kamau Bell didn't return because of eligibility rules, as more than half of the 2019 season aired before the eligibility cutoff and all of the 2020 season aired after the June 1 cutoff date. It should return as a nominee next year. That written, last year's nominees "Born This Way," "Deadliest Catch," and "Life Below Zero" were all eligible and earned nominations in other categories, yet failed to repeat in this category. Only "RuPaul's Drag Race: Untucked" returned.* "RuPaul's Drag Race: Untucked" was also the only program in this category to earn another nomination besides "Cheer." Normally, that would make "RuPaul's Drag Race: Untucked" the favorite, but it has only two nominations to six for "Cheer," so I think the latter is really the favorite.

The team from Cheer wins the Emmy for Outstanding Unstructured Reality Program.

I'm glad to see clips from all the nominees and hear director Greg Whitely acknowledge his team. Speaking of competitive teams, I made a comparison to an experience I had that related to "Cheer."

As someone who marched in drum corps and still follows the activity, I can relate to their experience, at least in terms of practice and judged competition. I wonder if my fellow drum corps alumni would agree. I'll have to ask.

I asked on Facebook and my fellow drum corps alumni agreed with me about "Cheer." They loved it!

It did and unseated "Queer Eye." Watch 2020 Creative Arts Emmys: Directing for a Reality Program

The team from Cheer wins the Emmy for Outstanding Directing for a Reality Program.

This time, Whiteley not only recognized his production team, but also the cheerleaders themselves. Without them, there would have been no show. 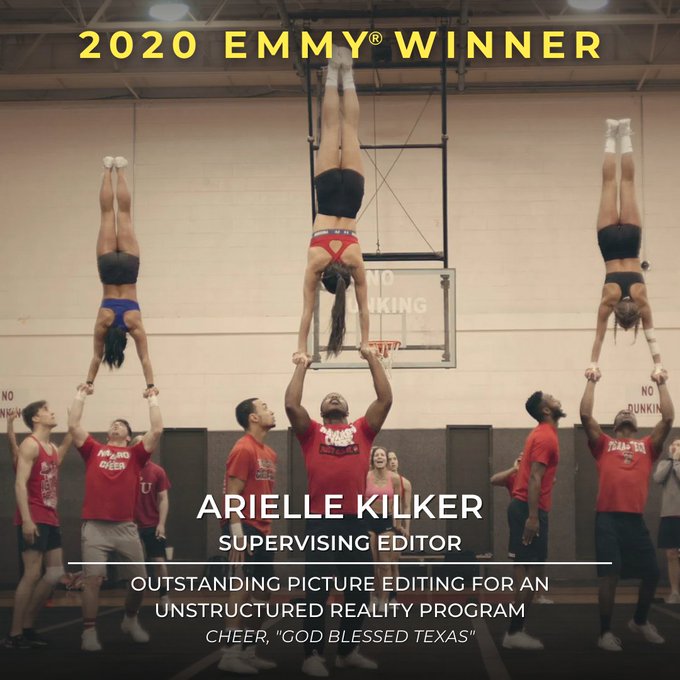 This is an open category, as last year's winner "United Shades of America with W. Kamau Bell" is ineligible. Based on the number of nominations, I'd say "Cheer" would be the favorite, but it could just as easily be "Deadliest Catch" or "Life Below Zero" with the latter my choice as spoiler.

The team from Cheer wins the Emmy for Outstanding Picture Editing for a Unstructured Reality Program.

While Whiteley thanked everyone else on the production team, the editors thanked Whiteley, Netflix and the production company in addition to the cheerleaders. Among all three acceptance speeches, it seems everyone got the recognition they deserved. With that, Congratulations to "Cheer" for winning three Emmy Awards and one TCA Award!

*If I didn't already have this entry more than half-written, I would have posted another SNL entry. Since I'm an environmentalist, I decided not to waste my work even if it means I get fewer page views, not that I need them. I made my page view goals for October on Friday, so I'm coasting for the rest of the month.

Previous posts about the 2020 Primetime and Creative Arts Emmy Awards
Posted by Pinku-Sensei at 4:31 PM