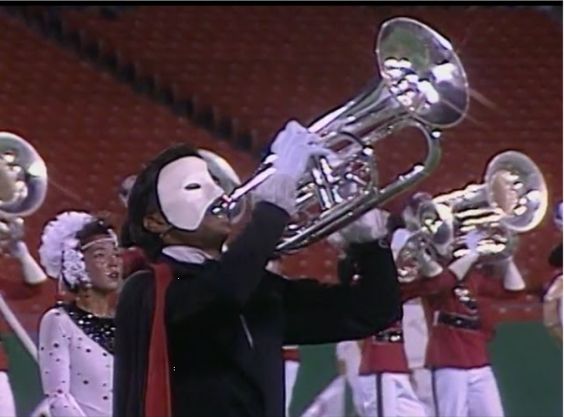 I wrote "I made my page view goals for October on Friday, so I'm coasting for the rest of the month" in the footnote to 'Cheer' wins 3 Emmy Awards and 1 TCA Award to lead unstructured reality shows. That means it's time to celebrate Halloween until the end of October. I'm going to start the way I usually finish with a drum corps Halloween with drinks!

Santa Clara Vanguard won with a revamped, second-year edition of Andrew Lloyd Webber's "Phantom of the Opera." For many fans, the production was everything they wanted from drum corps, and for that reason, it has long been a fan-favorite. It was voted the number one finalist performance ever by fans who selected the shows to be presented during DCI's 2007 Classic Countdown theater event.

That's only half of the opener. Follow over the jump for the rest, two other clips, and a drink recipe.

Hi-Stepper, whose videos proved invaluable for Drum corps maypoles from 1978 for a drum corps May Day and A happy drum corps Canada Day 2020!, provided the rest of the clips of this show, such as the complete opener in Top 100 Highest Rated DCI Shows #19: Santa Clara Vanguard 1989.


This clip includes the reason why I selected this particular show, the Opera Ghost dressed as the Red Death from Edgar Allen Poe's story "The Masque of the Red Death." What, you thought nothing serious, like the pandemic, would make an appearance here? HAHAHAHAHA! Foolish mortals, this is still a doomer blog, even when I can't be all DOOM all the time.


Now that the show is over, it's time for a themed drink. Here's one from the official YouTube channel of "The Phantom of the Opera," Cocktails of the Opera - Masquerade Margarita.

Cast member Paul A. Schaefer is back again with a special springtime spritz, right on time for #NationalTequilaDay! Introducing the Masquerade Margarita, a special mix of tasty tequila and pomegranate delight. Watch the video to see how this delicious drink is concocted and mix up your own Masquerade Margarita to enjoy! Happy sipping, from all of us at The Phantom of the Opera.

*I can use the concept for this entry next year, as Santa Clara Vanguard played "The Phantom of the Opera" in 1988 as well and The Phantom of the Opera has at least two more drink recipes. Works for me, as I'm an environmentalist who likes to recycle. In the meantime, stay tuned for more Halloween posts through the rest of the month. Trick or treat!
Posted by Pinku-Sensei at 4:26 PM