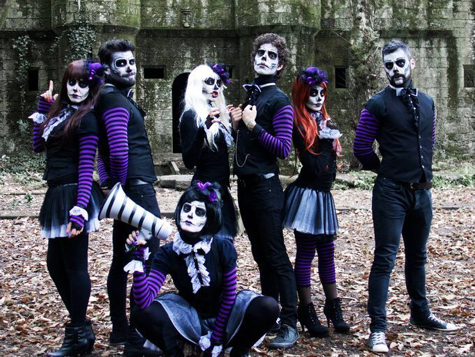 Infidel 753 and Ranch Chimp introduced me to another musical act for Halloween, Broken Peach.  Here they are singing "This is Halloween."

Song written by Danny Elfman for "The Nightmare Before Christmas film" directed by Henry Selick!

That song got an enthusiastic reaction from me, which I left as a comment at Infidel 753's blog.

The singers certainly put the Gothic in Gothic Lolita!

I found two other Halloween songs on their YouTube channel, "Your Own Personal Jesus," which they credit to Marylin Manson (the song is really by Depeche Mode) and Hocus Pocus, which they just put out yesterday. I plan on using "This is Halloween" and "Hocus Pocus" on my blog. Last year, it was Dancing German Witches. This year, it's Singing Spanish Witches!

I already used "This is Halloween."  Now it's time for Broken Peach to sing "Hocus Pocus -- I Put a Spell on You."

"I Put a Spell on You" is a 1956 song written by Jay Hawkins, whose recording was selected as one of the Rock and Roll Hall of Fame's 500 Songs that Shaped Rock and Roll. In 1993, Bette Midler starred with Sarah Jessica Parker and Kathy Najimy in the Walt Disney film, Hocus Pocus. The Sanderson Sisters covered the song & this is our humble tribute!

I would have stopped here, but then I saw their rendition of "Your Own Personal Jesus" and couldn't resist posting that here, too.

Song written by Martin Gore (Depeche Mode), released on 28 August 1989. Since its release, the song has been covered by numerous artists including Marilyn Manson or Johnny Cash. This is our Halloween Tribute about that song.

This appealed not only to the horror and rock fan in me, but also the marching arts geek -- uniforms, marching, and equipment work.  Now, if only they could have stayed in step the whole time, it would have been perfect.

Before I leave my readers for today, I note that Broken Peach also sings Christmas songs.  Maybe I'll post one of them for Yule this year.  Stay tuned.  In the meantime, Happy Halloween!
Posted by Pinku-Sensei at 10:57 AM