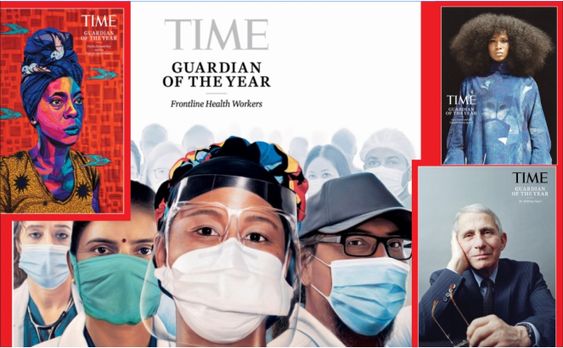 Modified from the original at The Logical Indian on Facebook.
I closed Joe Biden and Kamala Harris named Time Magazine's Person of the Year for 2020 with a preview of coming attractions.

Frontline health care workers didn't come away empty-handed, as they were just named Guardians of the Year, which I think is appropriate. I guess they couldn't be both Person and Guardian. I'll have more on them along with Athlete of the Year and Entertainer of the Year over the weekend. Congratulations to all the honorees and stay tuned to all my readers.

Guardians put themselves on the line to defend the ideals sacred to democracy. In 2020, they fought on many fronts. On the front line against COVID-19, the world’s health care workers displayed the best of humanity—selflessness, compassion, stamina, courage—while protecting as much of it as they could.

Time recognized frontline healthcare workers all around the world, not just in the U.S. They were not the only people recognized for their efforts during the COVID-19 pandemic. They shared that honor with Anthony Fauci: [One of the] Guardians Of The Year.

In Washington, Dr. Anthony Fauci led not only the battle against COVID-19 but also the fight for truth—clear, consistent messaging being fundamental to public health. With steadfast integrity, Fauci nudged, elided and gently corrected a President used to operating in a reality of his own construction, buoyed by the fervent repetition of lies.

As I wrote yesterday, "I would have picked Dr. Anthony Fauci and the frontline health workers for 2020's people of the year." I'm glad they got recognition as the Guardians of the Year as a consolation prize.

Fauci and the frontline health workers weren't the only candidates for Person of the Year to earn the runner-up prize as Guardians of the Year. Porche Bennett-Bey And Racial-Justice Organizers: Guardians Of The Year also earned that recognition.

Guardians put themselves on the line to defend the ideals sacred to democracy. In 2020, they fought on many fronts. When George Floyd was killed in Minneapolis in May, it was proof—if anyone needed it—that Black lives are still not treated as equal in America. The movement for racial justice found its voice in multitudes, including a mother in Kenosha delivering her frank report to Joe Biden.

This particular selection of the face of the movement against police brutality hits home for me, as my wife was living in Kenosha when we met nearly 14 years ago. She knows where the shooting and protests took place.

Something stood out about this year's honorees. Out of "the magazine’s shortlist for its Person of the Year: President-elect Joe Biden, President Trump, the movement for racial justice, and Dr. Anthony Fauci and the frontline health workers," the only one not recognized was soon to be Ex-President Donald Trump. Heh, heh. Loser.

Stay tuned as I finish this series tomorrow with the Athlete of the Year and Entertainer of the Year for the Sunday entertainment feature.
Posted by Pinku-Sensei at 11:48 AM