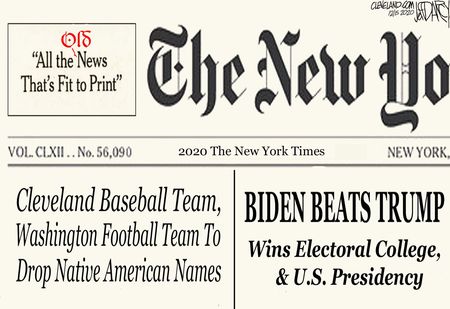 I concluded John Oliver on sports for an Opening Day delayed by pandemic by mentioning a possible topic for future blogging.

When the NFL season resumes, I might return to this well, as "Last Week Tonight" has a clip about the Washington pro football franchise, which will no longer go by their offensive name. Stay tuned.

I forgot about that until I watched a clip from Saturday Night Live that wasn't uploaded in time for me to include in 'SNL' opens with Pence getting vaccinated then looks back at Trump's presidency, Weekend Update: Cleveland Indians Name Change and Tom Cruise Covid Rant - SNL.

I thought there was something missing from "Weekend Update" when I put together Sunday's entry. Now I know what it was.

While SNL's Weekend Update reported dropping the name as news, The Plain Dealer AKA Cleveland.com pointed out that it really wasn't.

Sunday, The New York Times reported that the Cleveland Indians would be changing their nickname, six months after that had already been known.
...
The NYT story said the baseball team would make a formal announcement this week about changing its name, but for the 2021 season it would still use it and current uniforms, while deciding on a new moniker.

Based on the NYT story, many other news organizations, in print, television and social media, also reported for the first time that the Indians were changing their name.

In fact, that had been known since July 2020. Shortly after the Washington Football Team announced it would no longer be using the name “Redskins”, that same month, the Indians announced they were considering dropping their controversial name, just as they had already dropped their even more controversial mascot logo “Chief Wahoo” the year before.
...
Prompted by the NYT story, the Cleveland Indians officially released a statement Monday that they would be selecting a new name, and significantly, that it would have no Native American connections. Which rules out “Tribe.”

Unfortunately, "Tribe" is the first choice with fans, as seen in the graphic below from WKBN, which conducted a poll of its readers.


If the fans have their way, Cleveland's Major League Baseball team could be the Spiders, which was the name of the Cleveland's National League baseball team during the end of the Nineteenth Century, or the Rockers, a reference to the Rock and Roll Hall of Fame. Either would work for me, but let's see if the team's owners agree.

Follow over the jump for the relevant clips from "Last Week Tonight" about the Washington pro football franchise.

Here's the clip I referenced at the beginning of this post, The Washington Redskins: Last Week Tonight with John Oliver (HBO).

How is that team still called The Washington Redskins?
Oh, it's because their owner Dan Snyder doesn't want to change his way of life.

And a followup, John Oliver Redskins.


I consider the conflict over team names to be an extension of what I observed in TV news reports on Indigenous Peoples Day plus comedy for Canadian Thanksgiving.

When I posted I haven't seen this many statues fall since the end of the Cold War, it struck me that many of the statues were of Christopher Columbus in addition to Confederate monuments. WROC quantified it as seven statues defaced, destroyed, or removed. It's not just Black lives who matter, but indigenous ones, too!

I might have more airing of grievances or feats of strength tomorrow, because it's Festivus. Stay tuned.
Posted by Pinku-Sensei at 12:34 PM