The EPA celebrates 50 years of protecting the environment 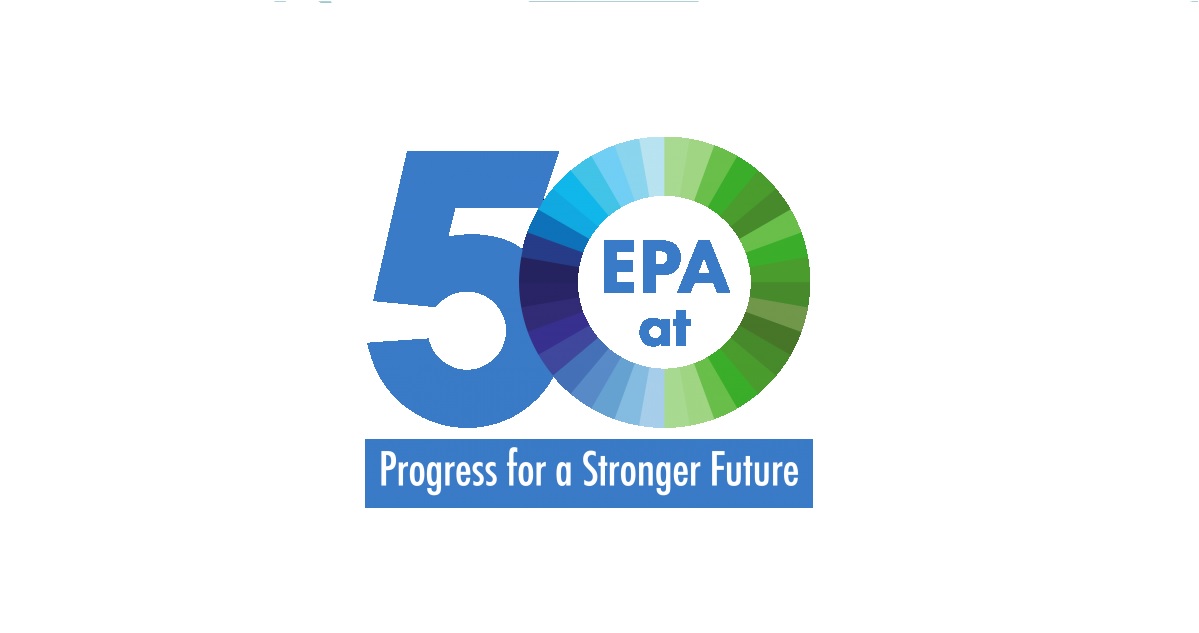 I was planning on continuing the Student Sustainability Video Festival series today, but I could not find the video I wanted to use on YouTube. That sometimes happens after three-and-one-half years have passed. However, the search did alert me to an anniversary that I just missed, the 50th anniversary of the founding of the Environmental Protection Agency (EPA) on December 2, 1970.

Today, the U.S. Environmental Protection Agency (EPA) celebrates 50 years of protecting human health and the environment in the United States, on tribal lands, and around the world.
...
Since 1970, EPA has made significant progress in protecting the nation’s water, cleaning up our air and land, and safeguarding human health. Historic milestones include setting the nation’s air quality standards to protect human health, regulating the quality of public drinking water, creating the Superfund program to clean up hazardous waste sites, protecting children from exposure to lead-based paint, and recently, launching the first ever United States Federal Strategy for Addressing the Global Issue of Marine Litter and new, modern National Recycling Goal of 50% by 2030.

The EPA uploaded a series of videos to its YouTube channel to celebrate the anniversary. The one that popped up in my search was The EPA Administrators: Looking back at 50 years of environmental protection.

EPA's administrators from 1970 to present day talk about their tenure at the helm of the agency, some of the environmental issues of the time and their accomplishments.

I must admit, I grimaced when Scott Pruitt and Andrew Wheeler spoke, but at least they said relatively reasonable things. This includes Wheeler's bragging about the EPA's accomplishments in the press release I used to open this entry.

“EPA has delivered on our mission to protect human health and the environment for every American, regardless of their zip code,” said EPA Administrator Andrew Wheeler. “Since 1970 air pollution has fallen more than 77 percent, down at least 7 percent in the last 4 years alone. Under the Trump Administration, our nation’s air, water and land are the cleanest and safest they have been in our lifetimes. This is something to celebrate.”

I wonder how much of that decrease in pollution is the result of regulations from previous administrations that Wheeler decided to keep instead of kill. Frankly, I'll be glad when Wheeler and the rest of Donald Trump's administration leave next month and better people take over.

The other video from the EPA I want to share today is EPA Charter Employees -- Marking 50 Years of Service to the Agency, which Ifound more compelling and generally more sincere.

In recognition of EPA's 50th Anniversary, we honor these Charter Members who were directly involved in the establishment of EPA and the commencement of operations on December 2, 1970 after a signed executive order by President Richard M. Nixon. These members set the foundation for the agency through leadership, integrity, honestly, commitment, and dedication. Throughout the years, they encouraged and inspired other potential leaders to pursue excellence while continuing to achieve the agency's mission to protect human health and the environment.

The EPA Administrators may take the credit, but these are the civil servants who actually did the work. I thank them for their service to the country and congratulate them for their efforts to cleam up the environment. May the EPA help improve the environment for 50 years more!
Posted by Pinku-Sensei at 1:06 PM