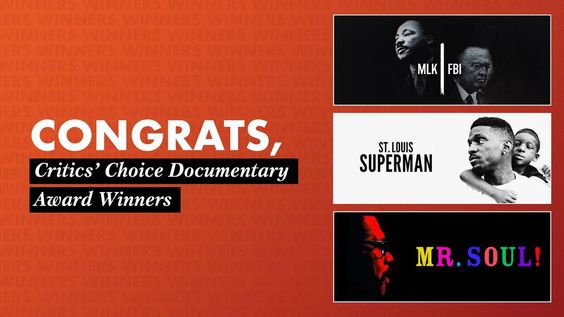 Image from Heartland Film Festival on Facebook.
After examining the COVID-19 pandemic in yesterday's entry about "Totally Under Control, it's time to return to winners about the ongoing civil rights struggle in the U.S., which was the theme of "John Lewis: Good Trouble," the winner of Best Historical/Biographical Documentary at the 2020 Critics' Choice Documentary Awards. Since today is Sunday, the day I usually post an entertainment feature, I'm going to make up for posting about Saturday Night Live and America Recycles Day on Sundays this month by showcasing three winners at the Critics' Choice Documentary Awards sharing a common theme, "MLK/FBI," "St. Louis Superman," and "Mr. SOUL!"*

Congratulations to Sam Pollard, Ben Hedin, Brian Becker, and Laura Tomaselli for this award and for the film's nomination for Best Political Documentary, where it competed against fellow winners "Totally Under Control," "John Lewis: Good Trouble," "Boys State," and "The Way I See It," which won Best Score, as well as nominees "All In: The Fight for Democracy" and "The Social Dilemma."

To see why this film won, watch MLK/FBI - Official Trailer from IFC Films.

Dr. Martin Luther King Jr. is remembered today as an American hero: a bridge-builder, a shrewd political tactician, and a moral leader. Yet throughout his history-altering political career, he was often treated by U.S. intelligence and law enforcement agencies like an enemy of the state. In this virtuosic documentary, award-winning editor and director Sam Pollard (Editor, 4 LITTLE GIRLS, MO’ BETTER BLUES; Director/Producer, EYEZ ON THE PRIZE, SAMMY DAVIS, JR.: I’VE GOTTA BE ME) lays out a detailed account of the FBI surveillance that dogged King’s activism throughout the ’50s and ’60s, fueled by the racist and red-baiting paranoia of J. Edgar Hoover. In crafting a rich archival tapestry, featuring some revelatory restored footage of King, Pollard urges us to remember that true American progress is always hard-won.

I've heard all this before, but I think it helps to have it all compiled in one place along with updated information. I'm not sure about the documentary's award prospects beyond a likely Cinema Eye Honors nomination. While it has been played at quite a few film fesivals, its official release date is January 15, 2021, so I'm not sure if it will qualify for the Academy Awards. I also don't know if it's going to streaming by the end of the 2020-2021 television season, which would make it eligible for a Creative Arts Emmy Award next September. Maybe if it shows on Independent Lens by the end of next year it would qualify for a News and Documentary Emmy Award in September or October 2022. Yes, it would take that long.

Follow over the jump for the other two winners.

I first mentioned today's second featured documentary winner in 'Harriet' and 'Parasite' headline diversity among Oscar nominees for MLK Day 2020: "'St. Louis Superman' tells the story of 'Bruce Franks Jr...a 34-year-old battle rapper, Ferguson activist and state representative from St. Louis, Missouri.' Not only is the subject a person of color, so are the producer-directors, Sami Khan and Smriti Mundhra." Based on that nomination, I included it in Coffee Party USA invites you to watch these political movies while staying safe at home and it was among the 2019 Golden Coffee Cups movie nominees for Best Appearance of a Government Official in a Documentary during 2019 to recognize Bruce Franks Jr. Unfortunately, he lost to John F. Kennedy in "Apollo 11." However, it finally won BEST SHORT DOCUMENTARY - St. Louis Superman.

It's a rare acceptance speech that's given by the subject instead of the producer or director, but I've seen it before. Congratulations to Khan, Mundra, Poh Si Teng, and especially Franks on their win. Considering that this is probably the last major award the short film can qualify for, I say about time it won.

To see what the film is about, watch ST. LOUIS SUPERMAN Trailer from TIFF Trailers.

Bruce Franks Jr., a Ferguson activist and battle rapper who was elected to the overwhelmingly white and Republican Missouri house of Representatives, must overcome both personal trauma and political obstacles to pass a bill critical for his community.

I wish Franks luck and success in representing his community. He has my support.

Congratulations to Haizlip and her crew on winning this award as well as being nominated for Best Documentary, Best Archival Documentary, Best Historical/Biographical Documentary, and Best Narration. Wow, if I had written a post about the nominees before I wrote my comment on Kek has apparently spoken at John Michael Greer's Dreamwidth, I would have been a lot less bullish on "Feels Good Man" winning Best First Documentary. That only had three nominations to five for "Mr. SOUL!" At least I'm confident "Feels Good Man" will earn at least one nomination for a News and Documentary Emmy Award next summer, probably Outstanding Arts and Culture Documentary. On the other hand, I think the awards run for "Mr. SOUL!" is over or close to over, as IMDB lists a 2018 release date for it, unless it somehow becomes eligible for an Emmy.

To see why the documentary earned its win and four other nominations, watch Mr. SOUL! Trailer, which adds the entertainment to today's Sunday entertainment feature.

Before Oprah, before Arsenio, there was Mr. SOUL! Ellis Haizlip ensures the Revolution will be televised with "SOUL!," America's first "Black Tonight Show."
A Film by Melissa Haizlip
Now Streaming: www.mrsoulmovie.com

Gil Scott Heron was wrong. The revolution was televised. Most of us alive then just weren't paying attention. I'm glad Haizlip created this documentary to correct that oversight.

I should have more about the Critics' Choice Documentary winners tomorrow, probably about Best Score winner "The Way I See It." Stay tuned.