'First Man' and 'The Favourite' surprise as Oscar winners as films about government and politics, a recycled comment 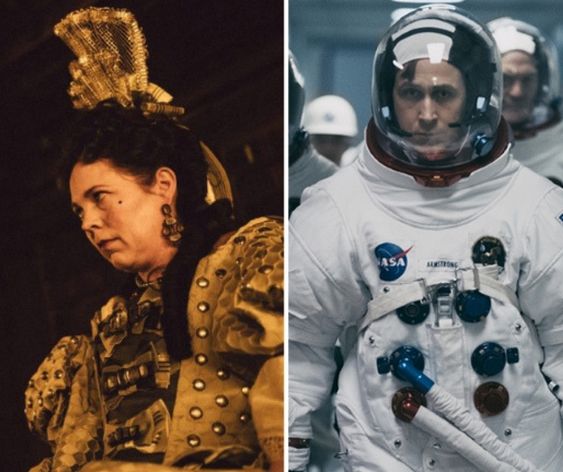 In response to James Howard Kunstler offering his hot negative take on the Academy Awards in Oscar Bytes, another of his readers commented "but I'd like to read others comments, who watched or have an opinion about the WINNERS."  I couldn't resist.*


I watched the entire ceremony and made predictions about most of the categories in advance.  I called most of the winners and even anticipated most of the upsets, such as "BlacKkKlansman" beating "Can You Ever Forgive Me?" for Best Adapted Screenplay and "First Man" beating "Avengers: Infinity Wars" and "Ready Player One" for Best Visual Effects, even if I didn't think they were favored, but one award surprised me, Olivia Colman winning Best Actress.  She won the equivalent category at the BAFTA Awards, but I expected Glenn Close to take home the little golden man instead.  Just the same, I enjoyed watching Colman giving her spontaneous stream-of-consciousness acceptance speech and so did the audience.

I already covered Spike Lee's acceptance speech in the previous entry, so I'm sharing the other two upsets, beginning with FIRST MAN Accepts the Oscar for Visual Effects.

Congratulations!  I have a toast for the movie at the end of the entry.  Also, this probably won't be the last time I write about "First Man,'as I fully expect it to be nominated for Best Action Film at the Saturn Awards.

Next, watch Olivia Colman’s 2019 Oscar Acceptance Speech for Best Actress to experience what I described in the comment at Kunstler's blog.

Watch Olivia Colman's Oscar 2019 acceptance speech for Actress in a Leading Role for her portrayal of Queen Anne in THE FAVOURITE.

Again, Congratulations!  Put that next to your BAFTA and Golden Globe.  Also, I might get to see the film nominated for International or Independent film at the Saturn Awards.

Now, the toast I promised to the winner of Best Visual Effects, Lillet Martini Inspired by First Man by Whitney Adams.

I'm partnering with Lillet again this year to create cocktails inspired by Oscar nominated films! I have two drinks/videos for you this week in anticipation of Sunday's Oscars. Up first is, appropriately enough, First Man. After seeing the film, I kept thinking about a martini and how a chilled and calm martini evokes a sort of lunar experience (it must have been so eerily silent and still when Neil Armstrong landed on the moon.) Inspired by his landing and the way he planted the American flag, the cocktail pick pierces through a single moon-like lychee. If you want to get a touch more galactic, add the tiniest pinch of edible silver luster dust to the shaker for a subtle moon dust effect.

Whitney A. does make a good Claire Foy as Janet Armstrong, which connects "First Man" to "The Favourite" via "The Crown" as Colman will take over the role of Queen Elizabeth II from Foy next season.  That written, cheers!

I plan on posting one two more installments featuring passages from the recycled comment at Kunstler's blog, the first about the documentary awards followed by remarks about the highest grossing film about politics and government, "Black Panther."  Stay tuned.
Posted by Pinku-Sensei at 4:21 PM