'Watchmen' vs. 'Mrs. America' and 'Unbelievable' — limited series at the 2020 Emmy Awards that examine politics and government

After taking a few days off to write about hurricanes, fires, voting rights, and the pandemic, it's time I return to the Emmy Awards. Today, I'm covering the nominations for limited series at the 72nd Primetime Emmy Awards. 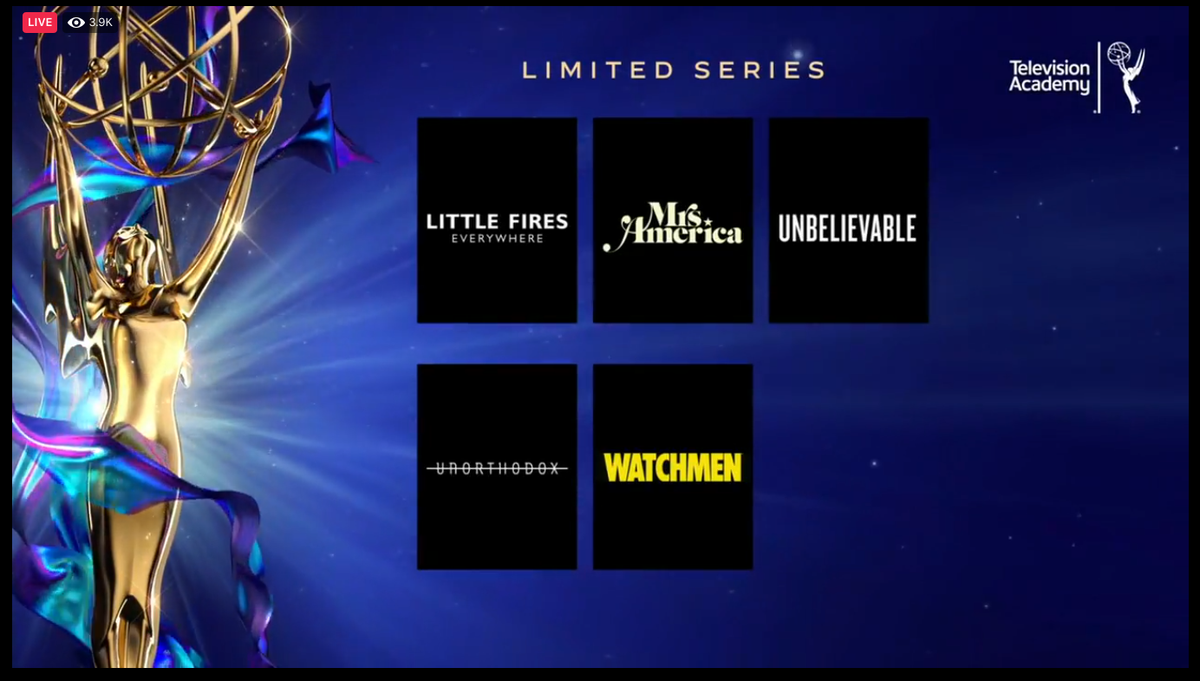 
As this is one of the marquee awards, the Television Academy made a video of the announcement of the nominees. Watch 72nd Emmy Nominations: Outstanding Limited Series.

This field is very similar to the one at the 2020 Television Critics Association Awards, so I'll be a good environmentalist and recycle.

Both "Watchmen" and "Unbelievable" examine politics and government through the lens of law enforcement. "Watchmen" views crime and punishment using a fantastic and futuristic perspective (even though it takes place in 2019, it's not our 2019), while "Unbelievable" based its story on real events..."Mrs. America" explicitly portrays actual politicians and activists, so it is expressly about politics and government..."Little Fires Everywhere" explores social issues and includes a trial at the climax of the series, so a government function becomes a critical plot point...As for the winner, I'll repeat what I wrote for Program of the Year, "I'm hoping it's 'Watchmen'...but it could just as easily be 'Unbelievable.'" It could even be "Mrs. America" as a spoiler.

Since I wrote that, "Watchmen" won four awards from the Television Critics Association, Program of the Year, Outstanding New Program, Outstanding Achievement In Movie, Miniseries, Or Special, and Individual Achievement In Drama for Regina King. "Watchmen" also won Limited Series and King won Movie/Limited Series Actress at the Gold Derby Awards. Because of those awards, as well as the five Emmy Awards the superhero show has already won, I'm even more confident that "Watchmen" will win this category.*

Follow over the jump for the rest of the limited series nominations at the Primetime Emmy Awards.

I covered two categories in 'El Camino: A Breaking Bad Movie' vs. 'Bad Education' and 'American Son' — Outstanding Television Movie nominees about crime and punishment at the Emmy Awards. Here's the first. 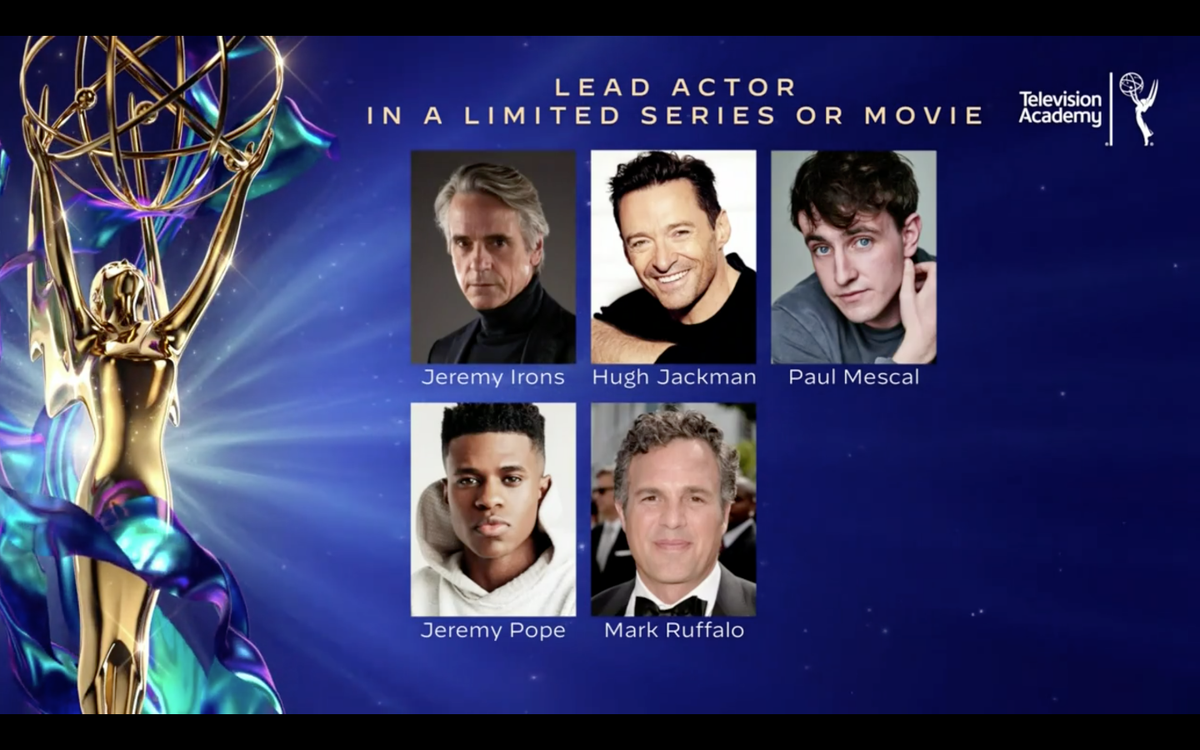 Outstanding Lead Actor in a Limited Series or Movie

Jeremy Irons as Adrian Veidt on Watchmen (HBO)
Hugh Jackman as Dr. Frank Tassone on Bad Education (HBO)
Paul Mescal as Connell Waldron on Normal People (Hulu)
Jeremy Pope as Archie Coleman on Hollywood (Netflix)
Mark Ruffalo as Dominick and Thomas Birdsey on I Know This Much Is True (HBO)

This is a prestigious enough award that the Television Academy made a video for it. Watch Tatiana Maslany announce the nominees in 72nd Emmy Nominations: Outstanding Lead Actor in a Limited Series.

The television movie nominee is Hugh Jackman for "Bad Education." He belongs here, but he's not likely to win; the competition is too stiff. The nominees from limited series will likely outpoll him. As for my pick, I'll repeat what I wrote in 'Watchmen' and 'Unbelievable' lead nominees about politics and government at the 2020 Television Critics Association Awards (TCA Awards): "I would not count out three-time Oscar nominee and Emmy winner as a producer Mark Ruffalo, the one actor from a show not nominated for Program of the Year, who played a set of very different identical twins in 'I Know This Much Is True.'" It's between Ruffalo and Jeremy Irons, who played what I would barely call a leading role as Adrian "Ozymandias" Veidt in the very political "Watchmen."

As much as I think Ruffalo deserves the award, Paul Mescal won for "Normal People" at the Gold Derby Awards. Looking at their IMDB pages, he's the only nominee to win for the roles listed above. 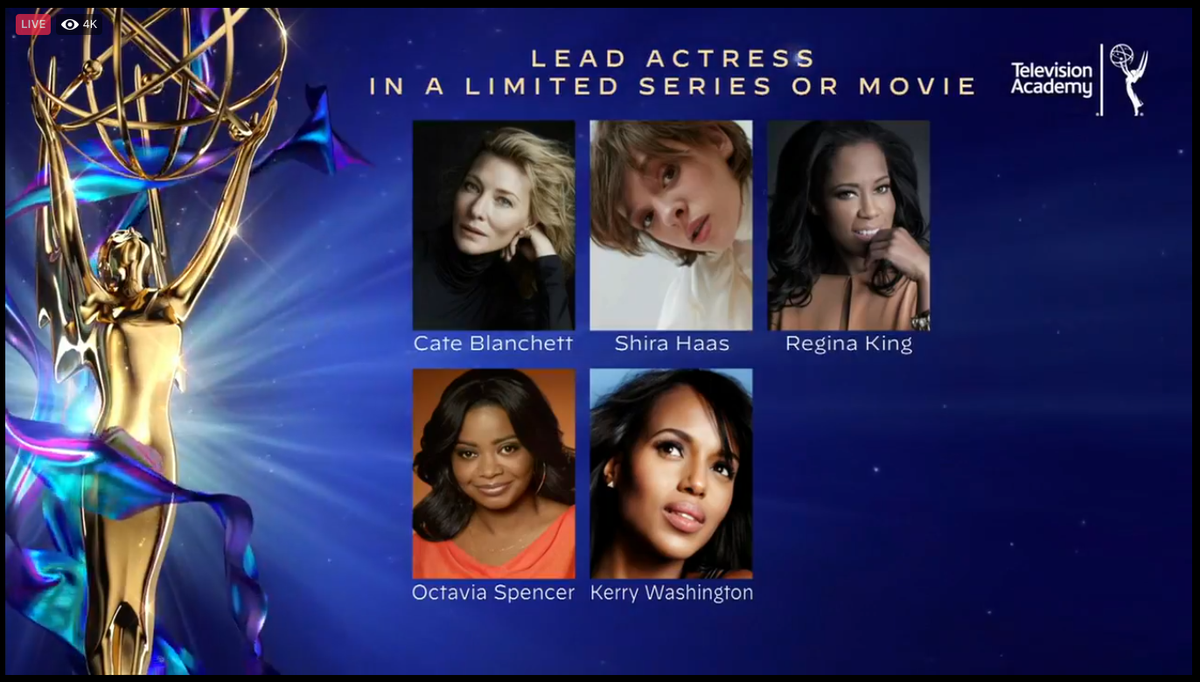 Outstanding Lead Actress in a Limited Series or Movie

Again, the Television Academy produced a video announcing the nominees.

As I wrote above, the nominees from political shows are Cate Blanchett as Phyllis Schlafly on "Mrs. America," Regina King as Angela Abar/Sister Night on "Watchmen," and Kerry Washington as Mia Warren on "Little Fires Everywhere." I know that I wrote "based on previous awards experience, I would say that two-time Oscar winner Cate Blanchett is the favorite, followed by Oscar and two-time Emmy winner Regina King," but King's two victories at the TCA Awards and Gold Derby Awards along with her win at the Critics' Choice Awards are enough to convince me she's the favorite. Good, I want her to win. 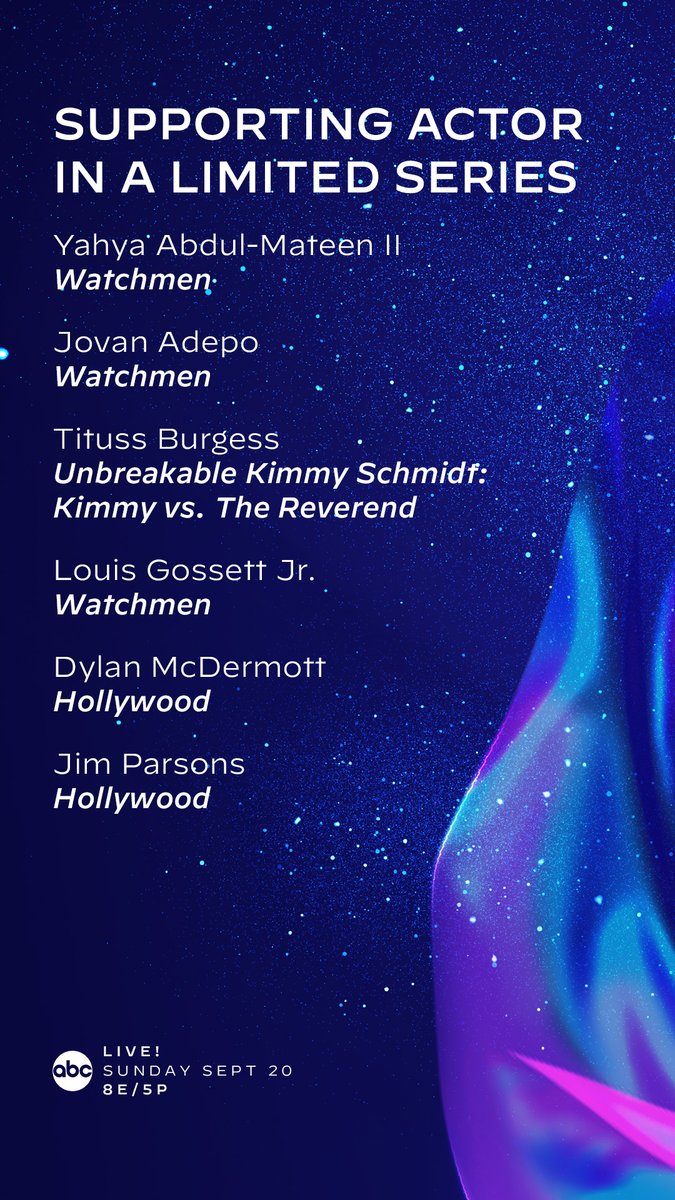 The TCA Awards are no help, as no supporting actors in limited series were even nominated for Individual Achievement in Drama, while the Gold Derby Awards gave their award to Jim Parsons as Henry Willson in "Hollywood" and didn't even nominate Louis Gossett Jr. Since Hollywood likes a good story about itself, Parsons might just win. 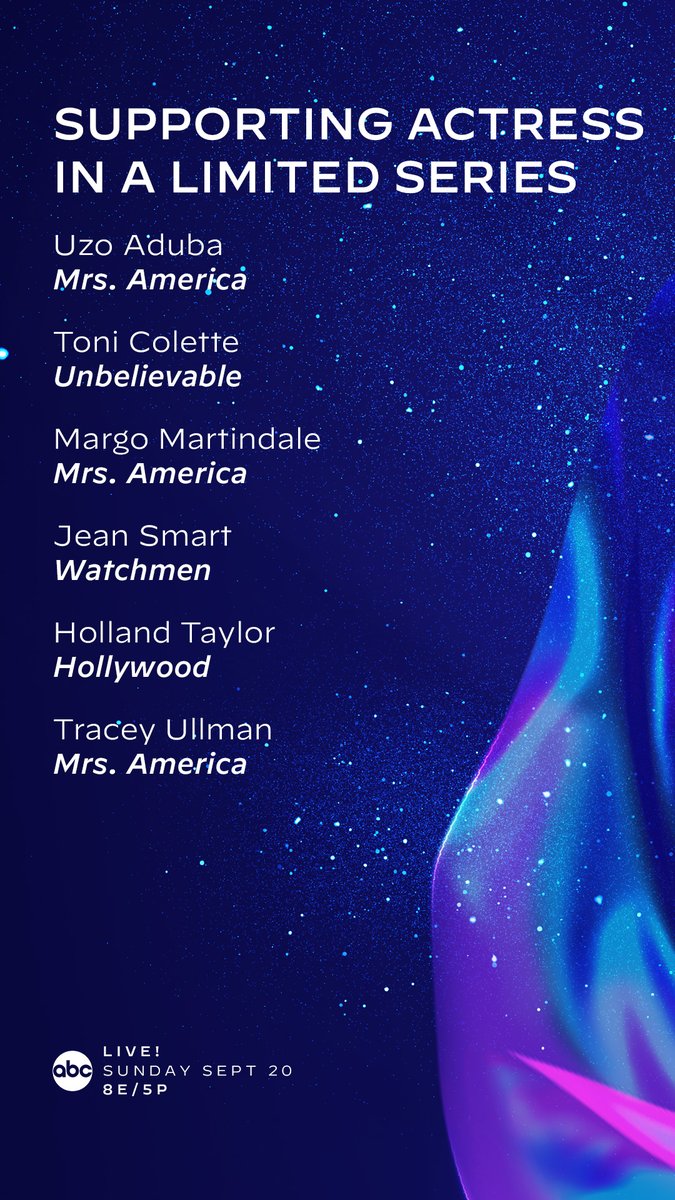 Outstanding Supporting Actress in a Limited Series or Movie

The very political "Mrs. America" has three nominees, Uzo Aduba as Shirley Chisholm, Margo Martindale as Bella Abzug, and Tracey Ullman as Betty Friedan. I suspect they will split the vote and let either Jean Smart as Laurie Blake win, just as she did at the Critics' Choice Awards or Toni Collette win, as she did at the Gold Derby Awards. For what it's worth, Collette wasn't even nominated at the TCA Awards; her co-stars were. Between the two, I want Smart to win. Let's hope I'm right.

Now for the talent behind the camera.

Outstanding Directing for a Limited Series, Movie, or Dramatic Special

The "Watchmen" episode "It's Summer and We're Running Out of Ice" won at the Directors Guild of America Awards, so it's my choice to win here.

Outstanding Writing for a Limited Series, Movie, or Dramatic Special

"Watchmen" won the award for New Series and was nominated for Drama Series at the Writers Guild of America while no other limited series was even nominated for either award, so it's my choice to win here, too.

I plan on returning tomorrow with the comedy nominees after celebrating Talk Like A Pirate Day. Stay tuned.

*I would normally write about the Emmys already won by limited series here, but I've had enough for now. I'll save them for the post about the winners.

Previous posts about the 2020 Primetime and Creative Arts Emmy Awards
Posted by Pinku-Sensei at 4:40 PM