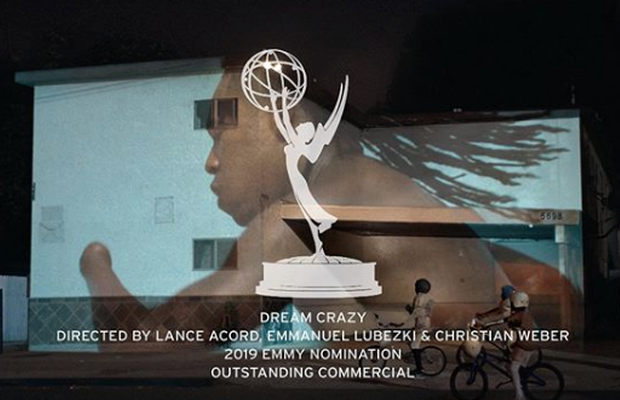 I closed out 'Point of View: Sandy Hook Promise' among Emmy nominees for Outstanding Commercial by handicapping the nominees.

Now, if this were the People's Choice Awards, I think it would be between "Don't Mess with Mother" and "Dream Crazy" with the latter favored on emotional appeal.  However, this is an awards voted on by entertainment professionals, who like flattering or at least interesting portrayals of show business, so I think "A Great Day in Hollywood" has nearly as good a chance of winning as the Nike commercial.  My readers and I will find out on the 14th or 15th of September, when the winners of the Creative Arts Emmy Awards are announced.  Stay tuned.

I was right to think Nike's "Dream Crazy" was the favorite, as it won.  Here is "the most inspirational of all the nominees, Dream Crazy by Nike.  It features Colin Kaepernick, so it has a political dimension from that alone."

Don’t ask if your dreams are crazy. Ask if they’re crazy enough.

"Watching that made me tear up."

While it featured overcoming hardship to achieve greatness, the winning commercial also featured the power of diversity of all kinds in sports without being explicit about it.  It was also a great example of advertising as art.  Congratulations!