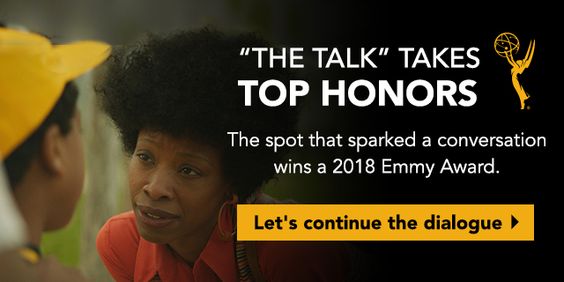 I expected the Creative Arts Emmy Awards would reward the entertaining Super Bowl commercial "Alexa Loses Her Voice" from Amazon while the News and Documentary Emmy Awards would recognize one of the more serious ad campaigns such as "The Vietnam War: A Film by Ken Burns & Lynn Novick" from PBS.  It was exactly the opposite; the Creative Arts Emmy Awards gave the Oustanding Commercial award to the very serious "The Talk - My Black is Beautiful x P&G" while the News and Documentary Emmy Awards rewarded Discovery Channel's entertaining "2017 Shark Week" with Outstanding Promotional Announcement.  Go figure.


As a reminder, here is The Talk - My Black is Beautiful x P&G.


I am glad to have been wrong about the winner of this award.  "The Talk" is a public service announcement America needs to watch.  As I wrote at the end of August, "Let's talk about 'The Talk' so we can end the need to have it."  The Television Academy agreed with me.

Now from the sublime to the ridiculous, here is the winner of Outstanding Promotional Announcement, which includes nearly the entire hilarious, if macabre, commercial.


Shark Week, still a bad time to be a seal.

Stay tuned for more about the Emmy Award winners.
Posted by Pinku-Sensei at 8:42 AM