In the ongoing soap opera that is La Affair Snowden, the latest development is that he has applied for asylum in Russia again.  Russia Today, which in this case I think would be a reliable source, reports in Snowden asks Russia for asylum.

NSA leaker & former CIA employee Edward Snowden has asked for political asylum in Russia, saying he could not fly to Latin America, according to Human Rights Watch representative who met the whistleblower. Thirteen Russian and international human rights advocates and lawyers have gathered at Moscow Sheremetyevo Airport for a meeting with Snowden.

I know at least one person who would be happy about this development, deported Russian spy and model Anna Chapman.  She tweeted her desires last week, which were captured by New York Magazine. 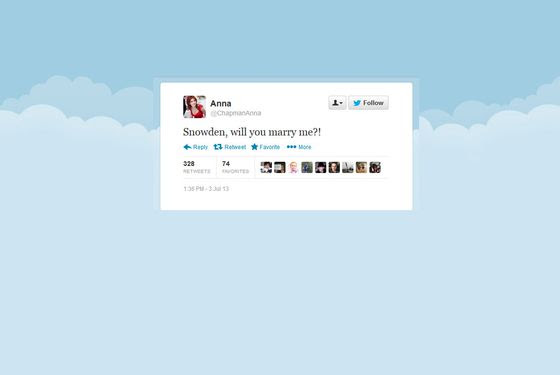 So she isn't Putin's mistress after all.  I'm disappointed.  On the other hand, Next Media Animation wasn't disappointed in the least.  This is exactly the kind of goofy sexy story that they specialize in, as they demonstrated with Edward Snowden receives proposal from spy Anna Chapman via twitter!

Edward Snowden received an unexpected surprise during his extended layover in a Moscow airport transit zone. Anna Chapman, the former Russian spy and current Russian model proposed to him via Twitter. Since her spying career came to its ignominious end in 2010, Chapman has reinvented herself as a TV host and model. Marrying Chapman might not be the worst choice for Snowden, who could use the Russian passport to finally get out of the airport.

"A match made in James Bond's fever dreams"--I'll say!  It's a crossover of "From Russia with Love" and "The Spy who Loved me" updated for the 21st Century with touches of "Goldeneye" and "Skyfall" for good measure.
Posted by Pinku-Sensei at 11:40 AM