The past few weeks, I've been filling in for two of the other editors of Overnight News Digest.  Because of that, I've been collecting news for Daily Kos that isn't about science, space, environment, or health.  Instead, I've managed to collect a lot of news about financial regulation, oversight, and crime.  I should have expected exactly that emphasis from Reuters, which has a financial slant to their coverage.  Over time, the articles create their own theme, a kind of connection.

(Reuters) - U.S. securities regulators were united in their decision to file civil charges against billionaire hedge fund owner Steven A. Cohen last week, in a high-stakes case that could result in Cohen being barred from the industry, people familiar with the case told Reuters.

The charges by the Securities and Exchange Commission against Cohen still fall short of what the SEC had hoped for.

The agency has been struggling to uncover evidence implicating Cohen with insider-trading, one of those people said.

(Reuters) - In March, as U.S. bank regulators were framing a new rule that would affect the $630 trillion derivatives market, JPMorgan Chase & Co sent five bankers from New York and London to Washington to raise some fine points about the impact of the financial reform.

In a jargon-laden, 23-slide presentation, the JPMorgan bankers walked regulators through the complexities of how their decisions would affect the arcane market, according to documents and a person familiar with the meeting.

On July 2, the U.S. Federal Reserve released the final rule. Of three requests made by JPMorgan - which were backed widely by other banks and lobby groups - regulators rejected the first, adopted the second and split the difference on the third.

Follow over the jump for news from previous weeks.

(Reuters) - U.S. federal prosecutors are considering a new strategy for criminally charging Wall Street bankers who packaged and sold bad mortgage loans at the height of the housing bubble, according to a federal official familiar with the investigation.

The official said federal authorities are finding new evidence they say indicates intent to commit fraud over the packaging and sale of mortgage bonds backed by subprime home loans in some of the civil lawsuits plaintiffs' lawyers have filed against large banks.

And they are exploring whether they can build criminal cases against bankers by using a 1984 law intended to punish individuals for scamming commercial banks.

(Reuters) - Former Goldman Sachs Group Inc. director Rajat Gupta was ordered to pay a $13.9 million civil penalty and banned from serving as an officer or director of a public company for having illegally passed corporate secrets to former hedge fund manager Raj Rajaratnam, a top U.S. regulator said on Wednesday.

The U.S. Securities and Exchange Commission said the order was issued earlier in the day by U.S. District Judge Jed Rakoff in Manhattan, who also oversaw Gupta's related criminal trial.

Gupta, 64, is appealing his June 2012 conviction and two-year prison term for having fed confidential tips he learned at Goldman board meetings in the second half of 2008 to Rajaratnam, a former billionaire who ran Galleon Group.

This last one isn't about regulation per se, but it certainly has to do with financial regulation.

(Reuters) - With a smile periodically playing across his face, Ben Bernanke almost looked pleased to face questions from members of the House of Representatives on Wednesday, but that might be because he knows that it was for the last time.

During a hearing described several times as more like a eulogy than testimony on monetary policy, the Federal Reserve chief received bi-partisan thanks for his service as successive members said they had heard he may not be in the job next year.

Bernanke has kept silent about his future plans, but he is widely expected to depart when his current term as Fed chairman expires on January 31. Nor has he pushed back against perceptions that he is ready to return to private life.

We won't have Helicopter Ben to kick around much longer.

(Reuters) - In a sweeping rejection of Apple Inc's strategy for selling electronic books on the Internet, a federal judge ruled that the company conspired with five major publishers to raise e-book prices.

Wednesday's decision could expose Apple to substantial damages. It is a victory for the U.S. Department of Justice and the 33 U.S. states and territories that brought the civil antitrust case. The five publishers previously settled.

Three weeks of financial regulation and crime news.  That reminds me, I missed a story; the Senate confirmed Richard Cordray as consumer bureau chief last week.  That deserves a cameo from Elizabeth Warren.

The Senate on Tuesday confirmed a director of the Consumer Financial Protection Bureau, ending a nearly two-year standoff in Congress and putting the new agency on sounder legal footing.

Bureau advocates and consumer law experts said Senate confirmation clears up a number of questions, including Cordray's legal status as the temporary bureau director and the agency's authority to oversee certain financial sectors such as debt collection.

"There is no doubt that the consumer agency will survive beyond the crib," Senator Elizabeth Warren told reporters earlier on Tuesday. Warren, a Massachusetts Democrat, set up the consumer bureau before running for the Senate last year.

Once again The Force was with Elizabeth Warren. 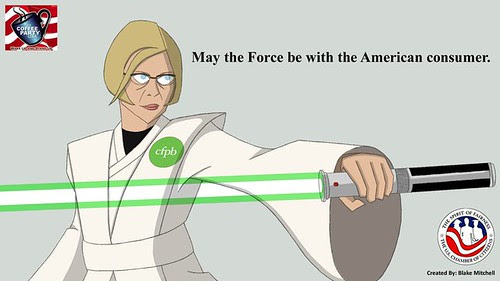