A conversation with The Archdruid about Objectivism, Satanism, and the GOP

I had such a good time putting together A conversation with The Archdruid for the Solstice that I decided to do it again on Christmas while I was in Chicago.  It helped that John Michael Greer revisted the points in The Fate of Civil Religion that I excerpted in The Archdruid on Objectivism as civil antireligion, a comparison of Objectivism and Satanism.*  This time, he made an explicit comparison between Objectivism and Satanism and pointed out the implications for the Republican Party.  I couldn't resist, even on vacation.

Follow over the jump for the relevant passages from A Christmas Speculation, my response with side commentary, and Greer's reply to me.

After comparing the policies of the GOP to the teachings of Jesus, The Archdruid comes to the following conclusion about what religion the GOP really follows, despite their professed Christianity.


If they’re deriving their commitments from a religion, it’s pretty clearly not the one taught by Jesus. Many people have made this same point in recent years, but it doesn’t seem to have occurred to any of them that another religion that’s active in today’s America does teach all the things the GOP supports. That religion, of course, is Satanism, and more specifically the version of it taught in Anton Szandor LaVey’s The Satanic Bible.

Those who were around during LaVey’s glory days in the 1970s, when he appeared regularly on talk shows and had a coterie of Hollywood stars in his Church of Satan, will doubtless remember The Satanic Bible. For those who weren’t, it’s a book-length screed denouncing Christian morality and upholding an ethic of raw selfishness and might-makes-right. It’s still very much in copyright, so I’m not going to quote it here, but any reader who turns its pages will find the present social policy of the GOP precisely reflected in LaVey’s dismissal of two thousand years of Christian teaching about our duty to care for one another, his shrill denunciations of the vulnerable and needy as “parasites” and “vampires,” and his insistence that the successful owe nothing to anybody else.

An interesting coincidence, or perhaps an ironic one? Maybe so, but I find myself wondering if there’s more to it than that. It happens fairly often that the repeated failure of a belief system causes many former believers to swing all the way to the opposite extreme, and embrace the antithesis of their former faith. The neoconservatives who briefly and disastrously shaped the direction of US foreign policy in the first years of this century are a case in point:  many of the leaders of that movement were doctrinaire Marxists during their college years, and responded to the abject failure of Marxism by doing their level best to become the wicked capitalists they had once so fervently denounced.

After several paragraphs in which he explains how such a failure of evangelical Christianity could occur and why the GOP would turn to Satanism, Greer then brings up the issue of how those who had turned would be able to recognize each other.


As the number of devil worshippers in evangelical churches and the Christian end of the Republican Party increased, though, their most pressing need would have been some surreptitious way to signal their involvement to those who shared their convictions, without believers in the Christian gospel being any the wiser. Coming up with a Satanic shibboleth that would be instantly recognizable to other devil worshippers, but completely opaque to devout Christians, might seem like a tall order, but it’s one that seems to have been met with aplomb.

Yes, this is where we discuss Ayn Rand.

This is the sentence that made me decide to respond.  Still, I read on to see how Rand could be used as a shibboleth for the closet Satanists in the GOP would able to communicate with each other.


Her present role as intellectual pin-up girl for people who call themselves Christian conservatives is thus a little odd, since claiming to be a Christian and a believer in Rand’s teachings at the same time is right up there with claiming to be a vegetarian carnivore or a celibate harlot. It’s not just that one of these things is not like the other; Rand’s teachings are flatly, openly, and deliberately opposed to every part of the gospel of Jesus.

Rand’s anticommunism made her turgid novels popular on the less thoughtful end of the American right in the 1950s and 1960s, though, and that accident of history prepared her for what might just be her core role in contemporary culture: a covert way for devil worshippers to identify themselves to one another in the supposedly Christian (and just as supposedly conservative) GOP of today. Closet Satanists attending fundamentalist church services or Republican party get-togethers can’t exactly sport upside-down pentagrams on their shirts or greet other attendees with a hearty “Hail Satan,” but a casual reference to one of Rand’s novels or pseudophilosophical screeds is the next best thing: once someone else responds enthusiastically to the mention of Rand’s name, a few other seemingly casual comments and perhaps a covert devil sign or two would be enough to settle the matter.

At this point, Greer has left reality and entered the realm of satire.  Just because he's writing fiction, however, doesn't mean that he's not telling a greater truth.


[W]hen supposedly Christian politicians start waxing rhapsodic about the alleged intellectual or literary virtues of Ayn Rand, I trust my readers will remember that what they’re saying actually works out to “I worship the Prince of Darkness, and you should too!” Any of my readers who happen to be devil worshippers themselves can proceed to welcome them as friends and brothers, while those of other faiths can cast their votes as their own ethical views suggest.
...
At this point, though, it’s hard to see any reason why the Satanists in the GOP need to keep the pretense going any longer. In an era when most discussions of the Christmas season in the mass media fixate on whether retailers are making a big enough profit to keep the economy stumbling blindly onward for one more year, I think a strong case can be made that America is ready to shake off the last of its qualms and openly embrace a Satanic political agenda. Among its other benefits, putting public devil worship at the heart of the GOP, where it so evidently belongs, can’t help but improve the flagging ratings of Republican national conventions; the otherwise tedious proceedings of the 2016 GOP convention, for example, would be enlivened no end by a Black Mass celebrated by the GOP nominee, perhaps with Ann Coulter’s nude form draped over the altar and a chorus of delegates chanting “Evil, be thou my good!” from the bleachers.

*Snork*  As I wrote, Greer has clearly been writing satire for several paragraphs.  Still, if he wants to place a nude woman on the stage, there are other candidates in addition to Ms. Coulter. 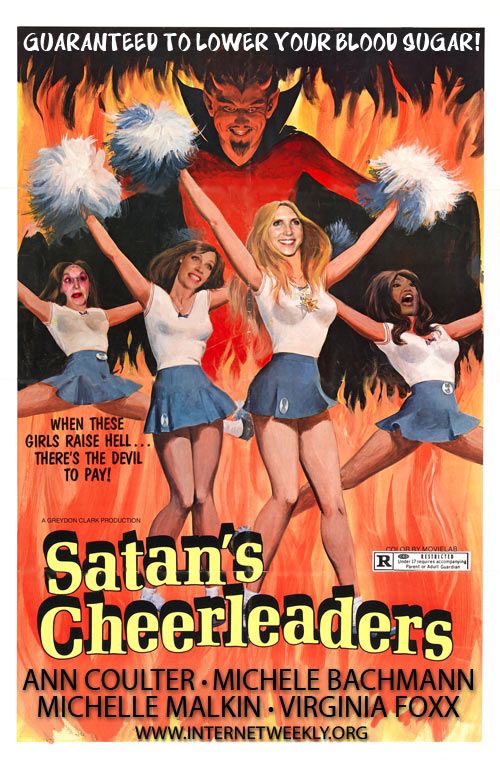 But enough of egging on the opposition.  Here's what I had to write in response.


And so you and your readers come back full circle to your first entry in April, "The Fate of Civil Religion," in which you identified both Satanism and Objectivism as anti-religions, Satanism to Christianity and Objectivism to Communism. I'm not the least bit surprised you brought the two together, as Anton LaVey himself called what he offered Rand with trappings. In fact, you pointed out the Satanic nature of the GOP's beliefs in an entry from August of 2011, "The Twilight of Meaning." I don't think many Republicans have noticed, so the message definitely bore repeating.

Thanks to Chad/escapefromwisconsion of The Hipcrime Vocab for pointing this out.  In a comment to my previous entry about Objectivism and Satanism, he included the link and relevant paragraph.


Greer himself noted something similar:

I wonder how many of the devout Christians who back the Republican Party, for example, realize that the current GOP approach to social welfare issues is identical to the one presented by Anton Szandor LaVey in The Satanic Bible. (Check it out sometime; the parallels are remarkable.) It may seem odd that believers in a faith whose founder told his followers to give all they had to the poor now by and large support a party that’s telling America to give all it has to the rich, but that’s what you get when a culture’s central narratives dissolve; of course it’s also been my experience that most people who claim they believe in the Bible have never actually read more than a verse here and there.

The Twilight of Meaning

Thanks to Chad/escape, I got points from The Archdruid for mentioning this.


As for the current crop of Christianists AKA Dominionists being willing, active Satanists, I think they are a bunch of easy dupes for the Devil or some other equally evil diety pretending to speak for the Holy Trinity. A friend of mine has gone so far as to propose that that while the Dominionists think they're worshiping Yahweh, Jesus, and the Holy Spirit, they've been hoodwinked, and Huitzilopochtli and a couple of his buddies from the Aztec pantheon are receiving the Dominionists' devotion instead.

Side note: I first included that weird speculation in Tell me now, which deity do the Dominionists really worship?  Crazy idea or not, it was enough to catapult the entry up to being the seventh most read at the end of the first year of this blog.

I had more points to make.


As for why they're such willing dupes, it's because they think they're making American Christian in preparation for the return of the vengeful Jesus of the Left Behind books and movies. Instead, they're making Christianity more American (actually more Southern) and then trying to convert America to that vision. Few ideas are more American in that view than anti-Communism, so slipping Satanism in via Ayn Rand was child's play.

Finally, you noted that Lust was not getting its due in the current Satanic/Objectivist vision, despite its central position in the life and fiction of Ayn Rand. That's because the American Right has tried to make two works of science fiction into reality simultaneously, "Atlas Shrugged" and "The Handmaid's Tale." The only way that combination works is if one is working for a bunch of religious fanatics in service to a kleptocracy. That's definitely Satanic.


Darksumomo, good![**] You get tonight's gold star for paying attention. Your friend may be right, for all I know.

If my friend is right, then welcome to The Land of Sacrifice.

*This isn't the first unflattering comparison I've made between Objectivism and an unpopular religion.  Two years ago, I posted Objectivism and Scientology: a sublime to the ridiculous comparison.  That was intended to be funny as well as insulting.  I am much more serious when comparing Objectivism to Satanism.  So is Greer, but he managed to make it funny, which is better than I could do.

**Why darksumomo instead of Pinku-Sensei?  Because I was using my daughter's computer and had to sign in to respond with my LiveJournal account.  It's one of the reasons I decided to return to LiveJournal.
Posted by Pinku-Sensei at 12:34 AM