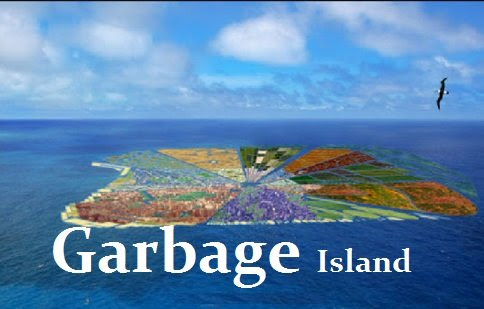 I just submitted all of my grades for the semester.  To celebrate, I’m posting the videos from the presentation the students voted their favorite this semester, just as I did last semester when I posted Student sustainability video festival 12: Bed Bugs on 'The Simpsons'.  The talk itself was about the environmental effects of plastic water bottles, but the videos used to illustrate the presentation were about the Great Pacific Garbage Patch, which I covered in last semester’s installments as Student sustainability video festival 11: Great Pacific Garbage Patch.  Hey, deja vu!

The Great Pacific Garbage Patch is a massive dump of floating garbage in the Pacific Ocean. We contribute to it everyday by littering and using un-biodegradable materials. Our trash is taken downstream from rivers into the ocean, where currents sweep it to the closest patch.

The second was portion of the Vice program Garbage Island: An Ocean Full of Plastic (Part 1/3).

Vice sails to the North Pacific Gyre, collecting point for all of the ocean's flotsam and home of the Great Pacific Garbage Patch: a mythical, Texas-sized island made entirely of our trash.
**
Come aboard as we take a cruise to the Northern Gyre in the Pacific Ocean, a spot where currents spin and cycle, churning up tons of plastic into a giant pool of chemical soup, flecked with bits and whole chunks of refuse that cannot biodegrade.

The students only saw the first three minutes, and it was enough to get them to vote the talk in first.  Imagine if they watched the entire show.  I just might tell them to do that for extra credit.
Posted by Pinku-Sensei at 9:05 PM