Spygames and paranoia 1: That's not Cthulhu on the patch

I included a story in Overnight News Digest: Science Saturday (Die, Selfish Gene!) that has been inspiring suspicion, if not downright paranoia.  The odd part is that it's the publicity that's doing this as much as the secrecy.  First, here's the U.S. Air Force showing the Atlas V NROL-39 Launch.

The United Launch Alliance (ULA) have launched their Atlas V rocket on the NROL-39 mission for the National Reconnaissance Office. Liftoff from Vandenberg Air Force Base in California was on schedule at the opening of the launch window at 23:13 local time Thursday (07:13 UTC on Friday).

The mystery payload is the size of a loaf of bread, and weighs just 11 pounds, according to American Forces Press Service.

So far, it's a run of the mill reconnaisance mission, although I'm surprised that an Atlas V is launching such a small payload.  According to Wikipedia, the rocket is capable of lifting much larger objects to geosynchronous orbit.*  That's not what's freaking people out.  This is. 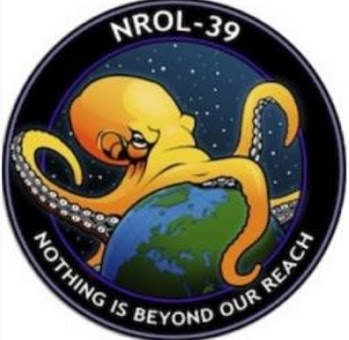 That prompted a user on Daily Kos to call it Cthulhu and point it the mission's motto, "Nothing is beyond our reach."  Sorry, that's just an octopus, not Cthulhu, and the motto is just another military badass boast.  That didn't stop people from thinking the worst.

The next day, there was an entire thread about the mission on Daily Kos.  I'm not going to quote any of it; you'll just have to see for yourselves the level of distrust and outright paranoia the patch alone is eliciting.

Yesterday, Elaine Meinel Supkis jumped on the bandwagon with NROL-39: The Evil Octopus Emblem Perfect For Bilderberg Gang Controlling US Citizens.  I'm taking this as yet another sign that Elaine has lost the plot.  Too bad.  Once upon a time, I really enjoyed her writing and was delighted to be in her virtual company.  No longer.

Just the same, I think everyone is going nuts over the symbolism, not the substance.  I'm sure it's another surveillance mission of other countries, not a domestic spying instrument.  If they want something to freak out about, it's the spying going on inside the World of Warcraft.  That's real.  It's also silly.  Stay tuned for more on this story.

ETA: Follow over the jump for some answers to my question about the size of the payload and the nature of the mission.

*It turns out that the small secret payload is not the only one aboard. From the NASA Spaceflight article:

The same article also gives a good idea of what the mission is about.


Notices to Airmen, or NOTAMS, issued for the L-39 launch showed that the rocket will follow the same trajectory used for the NROL-41 launch – leaving the satellite in an orbit only typically used for the NRO’s radar imaging satellites.

Because of this, it can be inferred that NROL-39 is the third satellite in the NRO’s current-generation radar reconnaissance fleet. It follows the NROL-41 mission, or USA-215, launched in September 2010, and NROL-25 (USA-234) which was launched by a Delta IV in April 2012.

The radar imaging program is believed to be a remnant of the NRO’s Future Imagery Architecture (FIA) program, which was intended to produce new-generation optical and radar-imaging surveillance satellites, replacing the earlier KH-11 and Onyx radar imaging spacecraft.

So, it's not a listening post.  It's most likely a radar mapper, which is not used for domestic spying, but instead for mapping and imaging things that cannot be seen by light or infrared, such as the disturbances of submarines sailing too close to the surface, or buried structures like tunnels and bunkers.  If so, the paranoia is completely unjustified.
Posted by Pinku-Sensei at 12:20 AM