A great day for space in Asia, a bad day for Comet ISON

I headlined Overnight News Digest: Science Saturday (Comet ISON at perihelion) at Daily Kos with the following from Space.com and the BBC.

Reports of Comet ISON's demise may have been premature. Its nucleus may still be intact and the coma is brightening as of Nov. 29, 2013 although the outbound ISON seems smaller after its encounter with Sol.


Comet Ison, or some part of it, may have survived its encounter with the Sun, say scientists.

The giant ball of ice and dust was initially declared dead when it failed to re-emerge from behind the star with the expected brightness.

All that could be seen was a dull smudge in space telescope images - its nucleus and tail assumed destroyed.

But recent pictures have indicated a brightening of what may be a small fragment of the comet.

It turned out that Space.com was right to question the survival of Comet ISON.  Here's a more recent image of the remains of the comet. 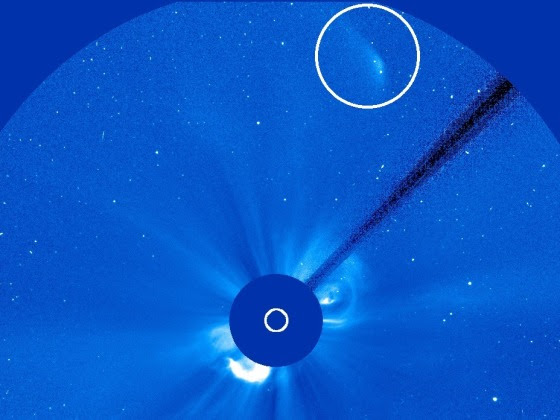 That circled area just to the right of the top center is what remains of the comet.  As Alan Boyle wrote over at NBC News, Comet ISON's leftovers fade away, right before a satellite's eyes.


Previous reports of Comet ISON's death may have been somewhat exaggerated, but this time it looks like the real thing.

Remnants of the object once touted as the "comet of the century" passed through the viewing field of the Solar and Heliospheric Observatory in the wake of Thursday's close encounter with the sun — and as it passed, the bright spot that survived grew dimmer and dimmer.

That ended up being less than people hoped for.

Follow over the jump for the good news for space programs in Asia, one of which managed to get more bang for its buck.


China is counting down to the launch of its first moon landing mission, a mission poised to blast off Sunday (Dec. 1) to send the country's first lunar lander and rover to Earth's nearest neighbor.

China's first moon rover is called Yutu, which means "Jade Rabbit" in Chinese, according to state media reports. It will launch with the Chang'e 3 moon lander on Sunday 12:30 p.m. EST (1730 GMT), though it will be 1:30 a.m. Monday, Dec. 2 at China's Xichang Satellite Launch Center.

If all goes well, the Chang'e 3 mission will land on the moon on Dec. 14, according the European Space Agency, which is providing mission tracking of the lander and rover for China's space agency.

China launches "Jade Rabbit," a rover that is being sent to the moon to study the lunar surface.

It really does look like the next human on the Moon will be Chinese.

Finally, India is sending a probe to orbit Mars, as LiveMint reports in Isro’s Mars Orbiter to be catapulted to the red planet.


New Delhi: With one last swing propelled by Earth’s gravity, India’s Mars Orbiter spacecraft will be catapulted out of Earth’s orbit towards the red planet on Sunday.

“The show is just starting,” said Ajey Lele, research fellow at the Institute for Defence Studies and Analyses, as scientists at the Indian Space Research Organisation (Isro) prepared to fire the spacecraft’s liquid engine just past midnight on Sunday to give it the thrust to leave Earth’s sphere of influence and start on its long journey to Mars.

After travelling a distance of 680 million km for 280 days, the orbiter is expected to reach the Martian trajectory in September 2014.

“Isro is using the slingshot method. It has slowly been raising the orbit of the orbiter through raising manoeuvres, and when it finally reaches its last apogee, it will shoot upwards towards Mars,” said Lele. “The orbiter will then enter the heliocentric atmosphere, which is the intermediary between Earth and Mars.

India had to use this complicated procedure because the rocket it used was intended for geosynchronous sattelites, not interplanetary travel.  Therefore, a way had to be used to get more from less.  It worked.

If India succeeds, they'll be ahead of China in at least one event in the Asian space race.

Stay tuned for news from NASA in a future post.
Posted by Pinku-Sensei at 12:37 AM