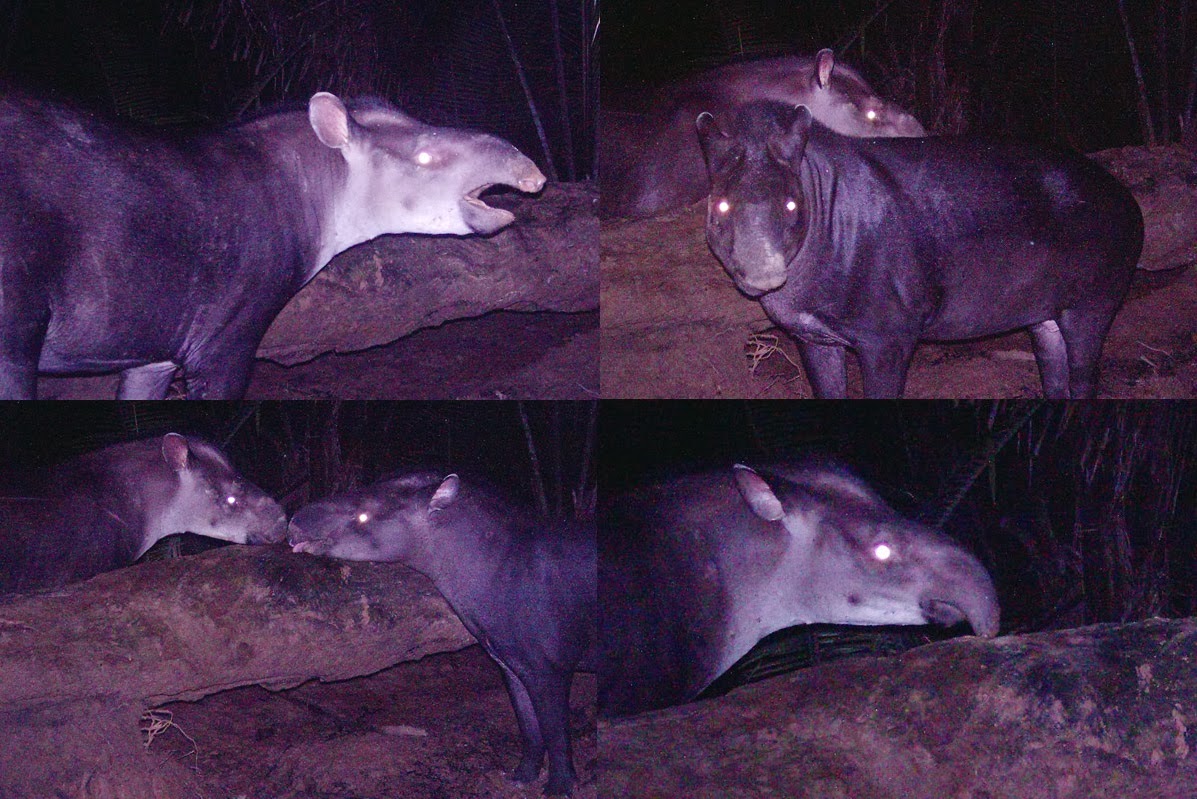 I have only 32 hours until 2013 disappears from the face of the planet at 11:59 PM in UTC-12, which includes Baker and Howland islands.  Consequently, it's time to resume what I started with 2013 in space and What did 2013 say on YouTube? and post the year in biodiversity stories I orginally included in Overnight News Digest: Science Saturday (Science in 2013).   I don't have any videos to use under "if it moves, it leads."  Instead, I've featured images of the largest animal described this year, Tapirus kabomani, which was first collected by Teddy Roosevelt.  If the animal had been described a century ago, it would likely have been Tapirus roosevelti.  This goes to show that science does follow the fashions of culture.  Hey, scientists are people, too.

As it turns out, "Roosevelt's Tapir" or the "Dwarf Tapir" is among the species featured in Smithsonian Magazine's A Recap of Our Five Favorite New Species of 2013.

New species of insects, fungi, spiders, plankton, plants and even small mammals and reptiles are pretty commonplace. If you have enough expertise and spend enough time in the field, you are almost certainly guaranteed to uncover a new species, even if you’re searching in an urban center or an already well-explored country.

Finding a larger animal–a new bird or carnivore, for example–is a much rarer event. But such discoveries do happen, especially as genetic studies are drawing a much finer line between science’s traditional definition of what is and is not a species. Sometimes those new species turn out to be right below our noses, in museum collections or long-ignored field anecdotes.

Whether discovered using genetic sequencing or traditional field sleuthing, here are five of the most sensational species reveals of the year:

Follow over the jump for the rest of the biodiversity stories from last Saturday, including links to some great animal images.

On remote forest tree-tops and in deep Arctic oceans, researchers spotted and identified a varied collection of new species in 2013. Among them: a "cocoa frog" from Suriname, a shark that walks, and a tarantula the size of a dinner plate.

Though this year’s haul of new species runs into the thousands, researchers estimate that there are about 8 million species still unidentified by science skulking in remote corners of the world, and sometimes hiding out right under scientists' noses.

And that’s not including most of the microbial world. "When you throw in the bacteria and archaea and cyanobacteria and those early groups, all bets are off," Quentin Wheeler, incoming president of the SUNY College of Environmental Science and Forestry, and founder of the International Institute for Species Exploration, told NBC News.

Science is catching up with Mother Nature — but slowly. About 18,000 species are discovered every year, and as of 2013, "we’re fast approaching 2 million named things," Wheeler said.

Every year, scientists add to the catalogue of life on Earth: discovering and describing species not previously known to exist. Some, as might be imagined, are uncovered in the depths of little-explored jungles, but others have been found in cities, hiding in plain sight. Some have been mistaken for species that are close relatives, while others were so small or in a place so remote they simply escaped notice. From orchids to frogs with a chocolate-y hue to ants that look like they're wearing an eye patch, LiveScience takes a look at 13 of the fascinating new species announced this year.

That's it for the new species.  Now it's time for links to slideshows of cute and interesting animals and other life.

Humans are not the only creatures getting in on the craze that has won "selfie" the title of Word of the Year by Oxford Dictionaries. Unbeknownst to them, wild animals have also picked up on the trend, albeit a bit less earnestly than their human counterparts.

Get ready to squee: It's time for LiveScience's annual look back at all the adorable babies born at zoos around the world over the past year, one birth for each month. From a U.S. panda cub boom to fluffy swan hatchlings, we've got enough cute to get you through to the New Year.

This is the 10th year Olympus has sponsored the photo contest, which features microscope-based photography.

Finally, here's one I might recycle for a weird science entry.

Cute animals are an Internet genre of their own. But sometimes, Mother Nature's creations are downright weird.

The past year had its share of bizarre animal discoveries, from butterflies that feast on the tears of turtles to a two-headed shark fetus. Speaking of shark fetuses, they can sense predators even while they're still in their egg cases. Like we said: weird.

Read on for some of the strangest animal discoveries of 2013.

Stay tuned for more of science, environment, and health in the year that was.