My new blogging buddy Paul W. has given me a job I was going to do anyway as part of his Democratic Debate Drinking Game for October 2015 Even Though The Election Is Still 2016 And All: The All's Fair In Love And Gwar Version.


I will update this later to add links to any custom drinks or craft beers that my ally and co-conspirator Pinku-Sensei can put up on his Crazy Eddie Motie's News blog!

Follow over the jump to read drink ideas for the front-runner, Hillary Clinton.

Two sources have already chipped in with their suggestions.  Hypeline has the less helpful of the two.

So you think you’re having a grand ole time enjoying some tequila that can really get a party going? Watch out with that bottle you bought..you might just end up with only a worm at the end of it.

I'm not impressed.  First, the worm is in mezcal, not tequila.  I drank it in Mexico and ate the worm, so I know.  I actually liked it, too.  Second, Hypeline appears to have a conservative slant and might be letting its prejudices get in the way of its imagination.

I'm more impressed with Vinepair's What Would Each Of The Presidential Candidates Drink?

Hillary Clinton is known to love her beer, but she can’t possibly fit a growler in her pantsuit pocket. She has to be discreet, carrying her brews in a receptacle more traditionally used for hard liquor.

The .gif I used at the head of this entry shows this, but here is one of the frames in case the animation flashed by too quickly.

Finally, I have a recipe for the mixed drink aficianados, the Hillary Clinton cocktail.  Yes, there is such a thing.

Method: Pour all ingredients into a shaker with ice. Shake well,then strain into a chilled cocktail glass. Garninsh with an apple slice and maraschino cherry.

One of these posts would not be complete without Paul's rules for the candidates, so here they are for Madame Clinton. 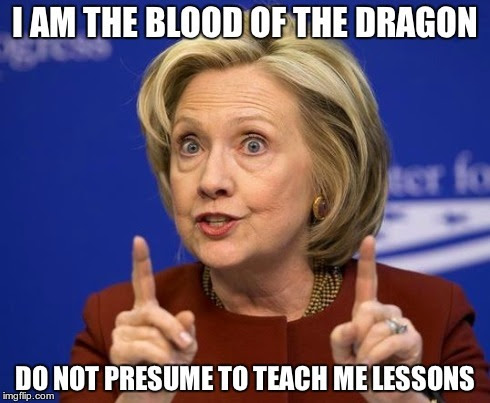