My wife will roll Dez's odometer past 48,000 miles today, so it's time for the next driving update.  The previous update reported that Dez rolled over 47,000 miles on June 27, 2015.  That was 103 days ago, so my wife and I drove Dez an average of 9.71 miles/day and 296.1 miles/standard month during this time.  This is a lot less than the 12.99 miles per day and 396.10 miles per standard month we did between April and June of this year, which included part of a return trip from Mount Pleasant.  The closest comparable period was from November to February, when we drove the car 11.63 miles/day or 354.7 miles/month.  In fact, it's the least we've driven Dez since we bought it.  It's also very similar to the 9.62 miles/day and 293.27 miles/month we drove Ruby during May to September of last year.  It appears that the higher baseline since we moved to a more car-dependent neighborhood may not be as high as I expected, at least for Dez.  Pearl's driving may be another story.  Expect a driving update for her later this month.

It turns out that my wife and I contributed less to the continuing trend to drive more.  Bill McBride of Calculated Risk passed on the following from the Department of Transporation.

Travel for the month is estimated to be 283.7 billion vehicle miles.

Here's the graph showing the rapid increase in miles driven over the past year. 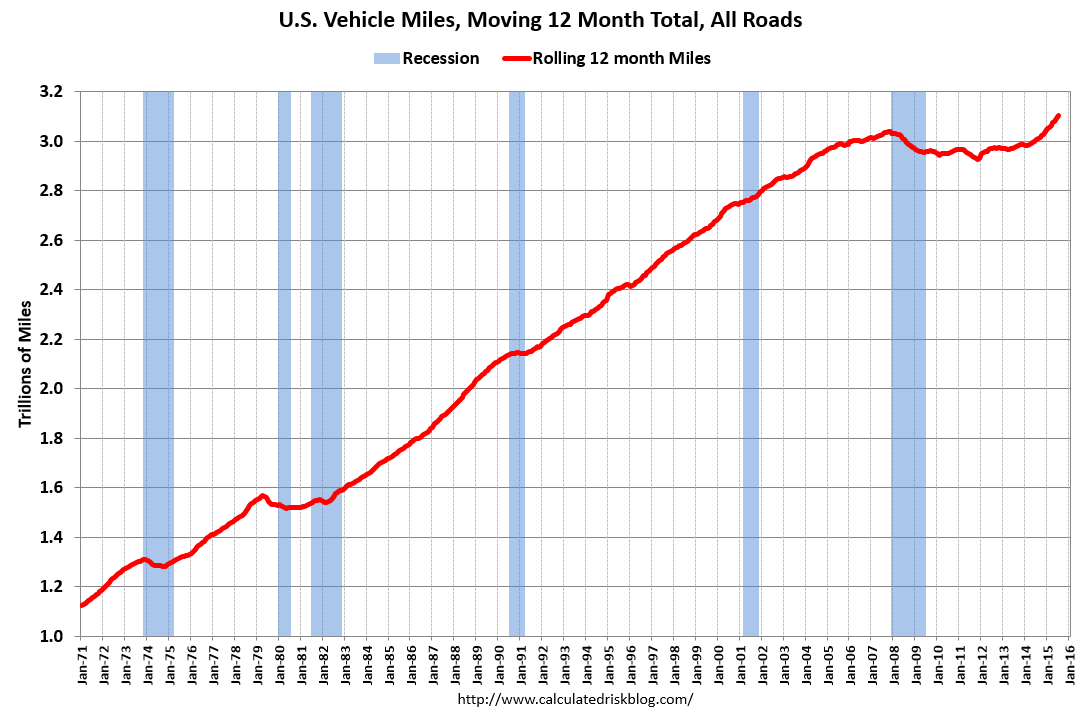 McBride attributes most of this increase to cheaper gasoline.  I agree.

That written, local gas prices are about to become less cheap.  I'll have a report on that later.  Stay tuned.
Posted by Pinku-Sensei at 9:55 AM