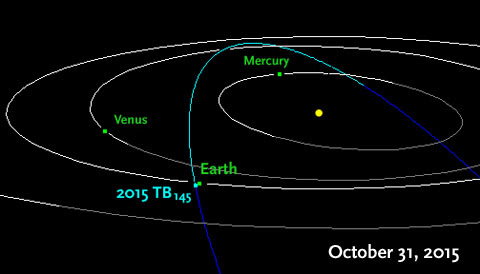 I haven't posted about asteroids and the threat of asteroid collision since July.  Three months later, nature is providing me the opportunity, as two space objects will visit Earth over the next three weeks.

The first is the "Great Pumpkin" asteroid, which will pass by Earth with 300,000 miles on Halloween.  TomoNews US gives its slightly silly take on the story in Halloween asteroid flyby will 'narrowly' miss Earth at the end of October.

MAUI, HAWAII — Scientists at NASA's Pan-STARRS observatory in Hawaii say that an unusually large and fast asteroid will fly by Earth this Halloween. The asteroid, named 2015 TB145, came as a surprise to the scientists, who spotted it less than two weeks ago.

The asteroid's flyby is expected to happen on October 31st, when it will pass within 310,000 miles, or 1.3 lunar distances, from Earth at an "unusually" high velocity of nearly 78,000 miles per hour. 2015 TB145 has an "eccentric" and "high-inclination" orbit, which may explain its late discovery.

Estimated to be between 920 to 2,000 feet in diameter, the asteroid may seem far away enough, but actually it is flying by Earth dangerously close for an object of its size. According to NASA, if an asteroid of its size and velocity was to hit Earth, it would devastating our planet.

Scientists say the next time any celestial object this large will pass by this close to Earth will be in 2027 when the mile-wide AN10 asteroid passes within one lunar distance.

Fortunately, the fly-by will be an exciting near-miss.

The next scary day will be Friday the 13th, which brings its own visitor from space.  Unlike the asteroid, this one will collide with Earth.  Fortunately, it's much smaller and was originally from this planet in the first place.  Teletechnology brings the story of WT1190F, whimsically called "WTF."

WT1190F is predicted to crash into the Indian Ocean on 13 November. The object, dubbed WT1190F, is set to land in the Indian Ocean, around 40 miles (65km) off the southern tip of Sri Lanka, at 6:20 UTC on 13 November. It measures up to 7ft (2 metres) long and it could be a piece of rocket stage from a recent lunar mission, or even part of an Apollo program craft that has been in space for more than 40 years.

This will be much less dangerous than an asteroid impact, although I wouldn't want to be in a boat inside the expected debris field.  Pieces of metal falling at terminal velocity might be terminal for anyone in their way.  Just the same, this will provide a good opportunity for scientists to observe how spacecraft break up in the atmosphere and it will also remove one more piece of space junk.  Good viewing and good riddance!
Posted by Pinku-Sensei at 9:34 AM