Cracked on insects as a food of the future 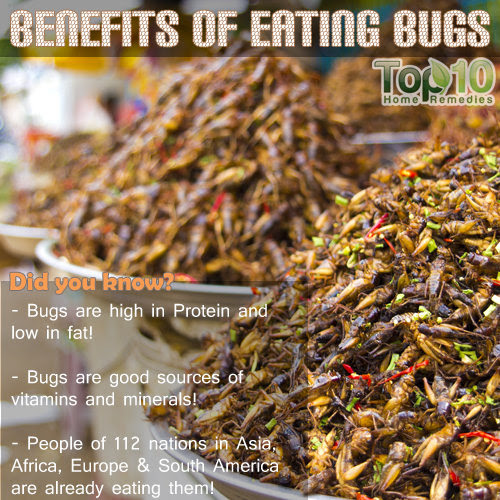 Eating insects as the future of food has been a recurring theme on this blog for more than four years, so I couldn't resist sharing the following section from Crack's 5 Shocking Ways The World Is About To Change on the topic.

If you found a cockroach in your cereal, your whole year would be ruined. We have such a physical revulsion to bugs that the above headline probably sounds like a threat: "In the future, food will be so scarce that you'll scarf down a grasshopper! You know, right after cooking and eating your own diiiiick!"

But I've already told you this isn't about making you afraid of a nightmare future. I'm saying that bugs will slip seamlessly into our diets the same way high fructose corn syrup did, only this time the world will be much better for it. I'm going to prove it to you in five steps. Ready?

Follow over the jump for more from David Wong's Cracked article, along with my commentary.

The first step is that we already consume insect products; we just don't know it.


The strawberry flavoring in your milkshake/yogurt/smoothie contains crushed insects -- specifically this guy, the Dactylopius coccus:

Here's the beetle along with the food products in which it's found.

It's a type of beetle that creates a nice red dye when ground up, and food companies have been using it as a natural food coloring for as long as anybody can remember (note: If you see "cochineal" on the label, that's ground-up beetle). You didn't mind, because you didn't know it was there. And in the future they'll come up with some other name for the ground-up cricket meat in your burger. See, that's the thing -- when I said "eating bugs" earlier, you imagined shoving a writhing praying mantis into your mouth. But you wouldn't eat a chicken that way -- there's a bunch of shit they do to it at the factory first. It'll be fine. "But," you say, "anyone would puke the moment they saw the cockroach farm where their 'food' is being grown!" To which I respond: Ever been inside a slaughterhouse?

That last remark is why vegans avoid foods with cochineal in it.  Consuming them, including using makeup containing it as a dye, is a violation of their "no animal products" ethos.

Now for the reasons I favor.


It's the only way to feed the world meat without permanently ruining the environment. I don't know if you've noticed this, but bugs seriously don't give a shit -- they can pretty much live anywhere and eat anything. They breed like crazy even when we're desperately trying to kill them. So, with the same amount of resources, insects will produce about 800 percent more meat than beef and generate a fraction of the greenhouse gases. It doesn't seem like there's much "meat" on an insect, but for instance 80 percent of a grasshopper is edible as opposed to only 40 percent of a cow. They're boneless!
...
They're healthier to eat. Per calorie, a cricket has 40 percent more protein than beef and 40 percent less fat.


Your rebuttal is probably, "But what does that matter if it tastes like shit? Or rather, tastes like a bug, since most people would rather eat shit than a cricket?" But consider that ...

About 2 billion people already happily eat insects. In Mexico, the only reason they don't eat more grasshoppers (chapulines) is because they can't afford them -- demand is so high that grasshoppers cost more than beef or pork. They're trying to scale up production as we speak (right now they don't farm the insects so much as try to go out and catch them -- you can imagine what a pain in the ass that is, people running round with nets and shit).

This last point is where I can say that I put my money where my mouth is.  I've eaten grasshoppers in Mexico and found them delicious and I'm looking forward to doing it again.  I can also point to people in the UK who will not only eat bugs on a dare but are willing to buy cooked insects.

Finally, people will change their minds.


Visceral disgust is something humans get over pretty easily. Remember that these huge, disgusting insect-like monsters ...

... used to be so revolting to people that they were fed to the poor and prisoners. Lobsters used to wash up on the beaches in big, gross, smelly heaps, the giant, red, mutant cockroaches of the ocean. Now you'll pay $40 for that ugly bastard...Someday, you'll just as happily eat a sausage made of mealworms. I think 80 percent of you don't believe me...and that's fine -- if you can't get over it, your kids and grandkids will. That's because humans adapt. That's what we're good at.

I couldn't have written a better argument myself.  That's why I quoted it.
Posted by Pinku-Sensei at 8:00 PM