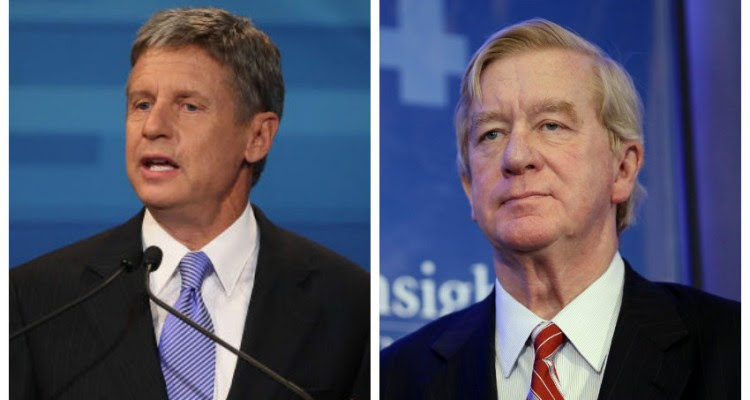 Over the weekend, Paul W. mentioned that the Libertarian national convention would be in Orlando this weekend and linked to Libertarian Gary Johnson picks former Mass. governor for VP at Politico.  I had the following reaction.


As for [William] Weld running with Johnson, that's a very serious ticket should the Libertarians actually choose both. They are serious about being the alternative to Trump and whoever he picks (please, let it be either Gingrich or Palin--the laughs will keep coming all the way to Election Day!) Too bad neither will meet the approval of William Kristol; the Libertarians are insufficiently hawkish and interventionist for his taste. He'd be better off with Hillary Clinton, but he'll never admit it. No wonder liberals call him "Captain Always Wrong."

As if on cue, CNN interviewed Weld on Sunday, just as they did Gary Johnson two weeks ago.

Today on CNN's State of the Union, Former Massachusetts Governor William Weld and Libertarian Vice Presidential Candidate, joined Jake Tapper to discuss his comparison between Trump and the Holocaust, gun control and more.

I still think 2016 could be a good year for minor party candidates and so does CNN.

MSNBC does as well.  The Sunday before, Chuck Todd interviewed Gary Johnson in the context of Calls For Alternative Candidates Grows.

Can Republicans rally around Donald Trump as the convention draws near or will disaffected Republicans seek an alternative option in November? Former GOP New Mexico Governor and Libertarian presidential candidate Gary Johnson weighs in.

The Libertarian convention is this weekend.  Stay tuned for the results.
Posted by Pinku-Sensei at 12:12 AM