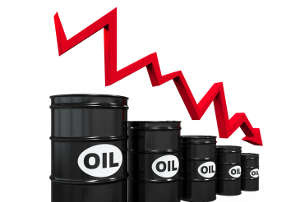 I concluded All Hell breaks loose after the U.K. votes to leave the E.U. with a note about a silver lining of the vote.


In the short term, the only good news out of all this is that oil will become cheaper.  When the dollar rises, oil nearly always falls.  I'll cover that in tomorrow's entry.


Oil prices dropped Friday but erased some overnight losses after the U.K.’s vote to leave the European Union triggered a selloff across markets.

Both contracts posted their biggest one-day percentage declines since February.

For this weekend, at least, both crude oil futures are below where they were a month ago.

All of this is happening while the price at the pump is already going down, as WXYZ reported two days ago in Falling gas prices across metro Detroit.


As the video reported, Gas Buddy listed the Detroit average at $2.51 and the Michigan average at $2.52 on Wednesday.  Today, those numbers have fallen to $2.49 for Detroit and $2.48 for Michigan.  True, they are higher than the previous report's $2.35 even with oil essentially the same or lower, but that's the effect of driving season, which always pushes prices up.  On the bright side, local retail prices are lower than they were on June 11, when the Detroit average peaked at $2.72 and the Michigan average fell off a plateau at $2.76.  They're also cheaper than this time last year, when regular was selling between $2.93 and $2.97.

As for what the future holds, Oil-Price.Net lists RBOB at $1.52, which is not only down 5.15% from Thursday's close, but also more than a dime lower than its $1.64 last month.  I expect retail gas prices will continue to drop this coming week before rising during the 4th of July weekend.  Then they'll start their long slide down for the rest of the year.  Maybe I'll break out Limbo Kitty next month.
Posted by Pinku-Sensei at 8:59 AM