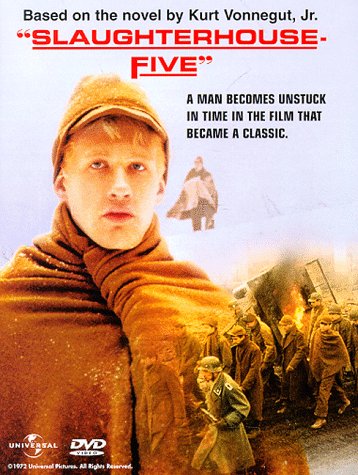 I know that I promised yesterday that I would write about the winners of the Television Critics Association Awards today.  I'm not feeling it and I don't have enough time.  I promise I'll get to it tomorrow.

Instead, I'm going to write the first installment of a long term project, blogging the Saturn Awards from their beginnings in 1973 until 2015, the year before I wrote about them in real time.  This is a project inspired by io9's Blogging the Hugos, which I found an interesting and entertaining way to learn literary science fiction history through the best novels of the year.  I hope to do the same for media science fiction here, along the way also looking at how the entertainment media landscape has changed during the past 44 years.

The inaugural Saturn Awards honored only two movies that year, the Best Science Fiction Film and the Best Horror Film.  According to IMDB and Wikipedia, they were "Slaughterhouse Five" and "Blacula."  "Slaughterhouse Five" was pretty much a consensus winner, as it also won the Hugo Award for Best Dramatic Presentation that year.  As for "Blacula," at least it was a horror film that I had heard of back then and still remember (supernatural film horror isn't really my thing; science fiction horror is another matter).

IMDB doesn't list any nominees for what was then called the Golden Scroll award.  In the case of the science fiction films, that's not a big loss.  After perusing the list at Wikipedia, I found only three legitimate contenders, "Conquest of the Planet of the Apes," "Silent Running," and "Solaris."*  A fifth nominee would have shown a distinct drop in quality.  The one I'd have chosen would have been the Disney comedy "Now You See Him, Now You Don't" with Kurt Russell as an invisible college student and it would have been a joke in more ways than one.  The comparable list for the horror films tells a different story.  There were lots of horror films that year, one of which stands out as having a more durable legacy than "Blacula" -- "Ben."  If nothing else, it had a great theme song that was nominated for an Oscar and won a Golden Globe.  Here's Michael Jackson performing the song at the Oscars.

Despite the power of the song, "Ben" may not have been as good as "Blacula" as a horror film and I'm not going to question the judgment of the voters 44 years after the fact any more.

This was a short entry.  Future installments of this series will be longer, as the number of categories increases and IMDB also lists nominees, but that's a problem for later.  Enough of the past.  I'll get back to the present tomorrow.

*"Silent Running" would have been a good film to discuss in terms of the environmental collapse theme of this blog.  Some other time.
Posted by Pinku-Sensei at 10:45 AM