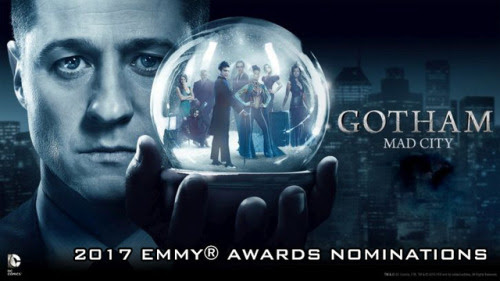 I've been pursuing my geeky, nerdy, and fannish interest in this year's Emmy Award nominations ever since I wrote about "Westworld," "Stranger Things" and "The Handmaid's Tale" making news with multiple Emmy nominations for drama series.  I continued my pursuit with posts about Star Wars and The Walking Dead franchise.  Today, it's time to write about the comic book adaptation shows.

"Gotham" earned three nominations, nearly as much as the rest of the comic book adaptation shows nominated combined.  Three of those were Marvel shows and the last was for an animated show, which means that "Supergirl," the big winner among superhero shows at this year's Saturn Awards and the most nominated superhero show at this year's Teen Choice Awards, was shut out, as were all the rest of the DC shows.  This confirms my opinion that "Gotham" is the superhero show the television professionals watch and like, while "Supergirl" is the show the fans most like.*

I'll be a good environmentalist and recycle what I wrote about two of the nominations.

Look, one of three nominations for "Gotham!"  Cool, but I expect either "Westworld" or "Stranger Things" will win.

I'm rooting for "Gotham," but wouldn't be surprised if "The Handmaid's Tale" pulled this off.

So far, "Gotham" is not in competition with any of Marvel's television shows.  That changes with the next category.

Stunt Coordination For a Drama Series, Limited Series Or Movie

Wow, what an action-packed field!  The only show missing is "The Walking Dead," which was nominated in this category two years ago.  Here, "Gotham" is in direct competition with "Marvel's Luke Cage" in the latter's only nominated category.  I'm rooting for "Gotham," but I'm not optimistic.  All the rest of the action shows have great stunts and "The Blacklist" won this category three years ago ("Game of Thrones," which one this category last year, is not eligible).

The next two nominations also pit Marvel vs. DC productions against each other.

In a contest between "Marvel’s Rocket & Groot" and "Teen Titans Go!", I'd vote for the Teen Titans.  Unfortunately, I doubt either will win.  Instead, I think the favorite is "Adventure Time," which has been nominated multiple times and won six statures over the years.

The final category includes the last nomination for a comic-book adaptation show.  I'll recycle and elaborate on what I wrote about the category in "Fear the Walking Dead: Passage" contributes to diversity at the 2017 Primetime Emmy Awards.

I'd love for ["Fear the Walking Dead: Passage"] to win, but I suspect the Emmy voters would prefer “Los Pollos Hermanos Employee Training,” a companion to "Better Call Saul," which they also like.

"Marvel’s Agents of S.H.I.E.L.D.: Slingshot" should just be happy to be nominated.

That's it for the superhero shows at this year's Primetime Creative Arts Emmy Awards.  I'll return to the Emmys later this week, after I write about the winners of the Television Critics Association Awards tomorrow.  Stay tuned.

*It reminds me of the situation with "Game of Thrones' vs. 'Outlander"; as I've observed, "'Outlander' is more popular with the fans who care to vote than 'Game of Thrones,'" while the latter is more popular with the Hollywood professionals, earning 39 Emmys total so far.   That's a rivalry that will have to wait until next year's Emmy Awards, as neither show had qualifying episodes during the season just concluded.