Worksheet for 'Treasures of the Earth: Power' 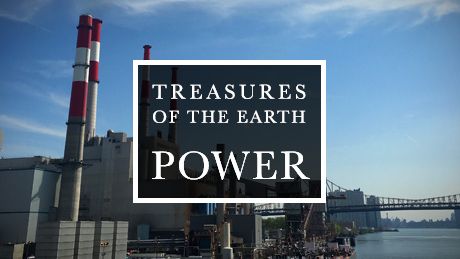 Yesterday, I told my readers to "stay tuned for the worksheet for "Treasures of the Earth: Power" that I promised to post three weeks ago" and which should have been posted two weeks ago.  Oh, well, I'm known to run late and still have some proposed series from six years ago unfinished, so two weeks isn't bad for me.  Follow over the jump for the worksheet, which the students were able to use much easier than the one for "The End of Suburbia."  I had to write a guide for my students to find the answers to that one.

Program description from PBS: Drill down to discover the treasures beneath our feet that power our world. Fossil fuels–coal, oil, and natural gas–powered the industrial revolution and allowed us to build a way of life that many cherish today. Personal cars, planes, lights, hot showers–all of these are gifts from our fossil fuels… but they have a dirty dark side in that they are polluting the planet. What is it about these natural resources that has allowed them to fuel our civilization? What secrets are locked in their molecules? Where did that energy come from, and can we find alternative energy resources that come in a cleaner form? The hunt is on for new treasures that might allow us to power our modern way of life without damaging the environment. Join NOVA as we explore the resources that both power and pollute, from modern-day oil prospecting in California, to a mega-city utility company struggling to keep the lights on during hot summer days, to China where an engineer strives to solve one of the greatest obstacles to the success of solar power. Travel the globe to see how our energy treasures are changing—and if they can keep the lights on.
1.     For which purposes do humans use fuel from the Earth?


2.    Why does electricity use peak during the summer?


6.    How much of U.S. electricity does coal produce today?


10. When did people first use coal as fuel?


11.  How did using coal for fuel change the lives of people?

12. What percentage of the world’s energy comes from oil?


13. How much coal would be needed to replace a tank of gasoline?


14. What are the expected effects of global warming?  List three examples.

15. What uses are there for plastic?  Name five uses or products.

16. Why is plastic a challenge for disposal?


17. What are the advantages of natural gas compared to other fossil fuels?


19. Solar panels are increasing by what percentage every year?


20.How are the Chinese attempting to solve a fundamental problem with solar energy?

21. How many deaths are caused by China’s air pollution every year?


23.How much of the world’s electricity does nuclear power provide?


24.What are the problems with nuclear power?  Name two.


25.How much energy is in a pound of uranium?


26.What are the advantages of nuclear power?  List two examples.


27.How much is energy demand expected to grow by the end of this century?

Watch The End of Suburbia on reserve at the library.  For ten points, answer the questions in the worksheet, which is in the lab manual.  For eight more points, write a one-page essay comparing and contrasting the problems and solutions described in The End of Suburbia with those in Treasures of the Earth: Power.  Include how optimistic the two shows are about the solutions.

Based on student feedback, it has lived up to my appraisal of it in 'Treasures of the Earth' to replace 'The End of Suburbia' in my classes.


It's up-to-date, it reinforces my lecture material, it has lots of interesting examples, it's shorter, and it's optimistic.  As I mentioned, ironically enough, in a comment to Kustler's entry Discovery a year ago, "the presentation they really enjoyed was about self-driving cars.  The feedback was that they'd had enough of doom and gloom and wanted something hopeful."  I'm going to give them what they want, which is also what I want.  That's a win-win for us, but a loss for Kunstler.  As I told my students last week, they will be the last ones I subject to Kunstler and the rest of the Prophets of Doom.

While it lasts, here is an upload of the episode on YouTube.  May my more curious readers watch it and follow along with the worksheet (ETA: This upload has been blocked in the U.S. I've found a new one, but I'm not replacing the one below because it would make it easier for it to be found and blocked, too).

Treasures of the Earth: Power
Drill underground to see the treasures that power our world—today and into the future.