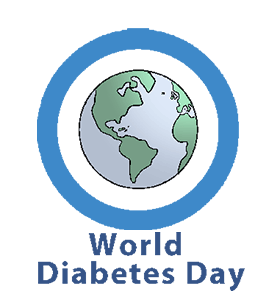 I missed a holiday when I posted 'Blue Planet II': Looking forward to next year's Emmys, World Diabetes Day.

Around the globe on November 14, World Diabetes Day raises awareness and provides education concerning a disease that affects over 400 million adults internationally.

According to the International Diabetes Federation (IDF), by 2040 approximately 642 million adults will have diabetes. With diabetes causing 5 million deaths in 2015, this projection is a source of concern. Awareness, education, action and research all can make a difference.

Visit www.worlddiabetes.org to learn more about both type 1 & 2 diabetes.  Find out how to get screened, to prevent type 2 diabetes and more about treatment.  Use #WorldDiabetesDay to share on social media.

The International Diabetes Federation & the World Health Organization created World Diabetes Day in 1991 to raise awareness of the rising threat of diabetes around the world. In 2006, the day became one of the official United Nations Days.

Since I've recently been diagnosed as a Type I diabetic and my youngest cousin died earlier this year because of complications from diabetes, this day now has extra meaning for me.  While I've posted about diabetes 34 times on this blog starting in 2011 (35 counting today), I've rarely made it a featured story, I suspect that will change beginning with observing World Diabetes Day from now on.

Today, I'll close by posting this video about the international symbol for diabetes, the blue circle.

HIV/Aids has the red ribbon. But what is the international symbol for diabetes?

I'll be happy to wear a blue circle pin to increase awareness starting next year.
Posted by Pinku-Sensei at 12:00 AM