'Putin's Revenge' on Frontline: Looking forward to next year's Emmys 3 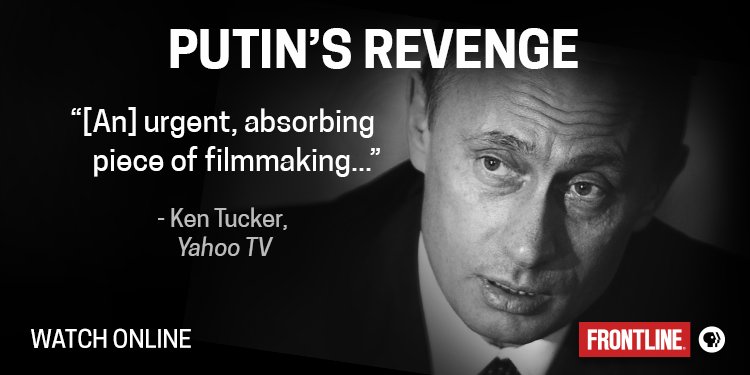 Today I conclude the series that began with "Blue Planet II" and continued with "Beyond a Year in Space" by examining Frontline's follow-up to "The Choice 2016," "Putin's Revenge," which was mentioned in the acceptance speech for Outstanding Politics & Government Documentary at the News and Documentary Emmy Awards.*  Watch the trailer from "Frontline."

How did Russian president Vladimir Putin come to see the U.S. as an enemy, and why has he sought to sow distrust in America's democracy? From filmmaker Michael Kirk and the team behind "The Choice 2016" comes this epic, two-part documentary examining Putin's rise, rule and motivations, and the American responses.

Follow over the jump for three clips from the documentary itself.

First, what was Putin seeking revenge for and why on Hillary Clinton?  Watch The Election Clash That Fueled Putin's Ire Against Clinton for the answers.

For months, reports of Russian interference in the 2016 U.S. presidential election have dominated the headlines. But this wasn’t the first time Vladimir Putin and Hillary Clinton faced off over an election and its fallout. Watch a scene from part one of "Putin's Revenge," an epic FRONTLINE documentary from filmmaker Michael Kirk and the team behind "The Choice 2016" examining Putin's rise, rule and motivations, and the American responses.

Next, why support Donald Trump?  Watch Why Trump Was "A Candidate Putin Could Like" to understand why.

During the 2016 election, Russian President Vladimir Putin saw Donald Trump as a candidate he could “do business with,” The New Yorker’s Ryan Lizza tells FRONTLINE. In this scene from “Putin’s Revenge,” insiders share their thoughts on why Trump was a candidate “Putin could like” -- from what former National Security Adviser Stephen Hadley calls Trump’s “penchant for authoritarianism” to his Moscow-connected team, including Paul Manafort and Michael Flynn.

Finally, how the did the U.S. respond?  The disappointing and disturbing answers come in As Russia Meddled, “Partisan Positioning” Slowed the U.S. Response.

The CIA linked Vladimir Putin to efforts to interfere in the U.S. election back in the summer of 2016. Why didn’t the U.S. government sound the alarm then? Watch a scene from part two of "Putin's Revenge," an epic FRONTLINE documentary from filmmaker Michael Kirk and the team behind "The Choice 2016" examining Putin's rise, rule and motivations, and the American responses.

There is much more in the documentary itself.  Expect to see it should "Putin's Revenge" be nominated and especially if it wins.  Stay tuned.

*Yes, I like sequels to award-winners.  It makes it easier to identify possible nominees, especially if the same creative teams are working on them.