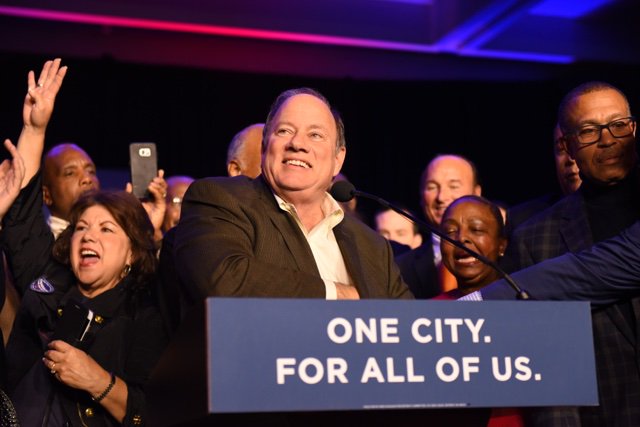 Here's news so expected I wrote the first half of  this post's title of on Sunday: Mike Duggan wins re-election, beating Coleman Young II for Detroit mayor from WXYZ.


Congratulations to Mayor Mike Duggan!  I agree with him and the overwhelming majority of Detroiters that Detroit is moving in the right direction.  I also would like to agree with Duggan as he says "This is the year we put us-versus-them politics behind us forever," as MLive reported.

"This is the year we put us-versus-them politics behind us forever," says Detroit Mayor Mike Duggan after winning reelection, Nov. 7, 2017.

The other Detroit contest I was watching was for Detroit City Clerk.  The Detroit Free Press reported Janice Winfrey re-elected Detroit clerk in tight race.

Incumbent Janice Winfrey has won re-election as city clerk in a race that went down to the wire.

I live out in the suburbs, not in Detroit, but I was still rooting for Gilcrist.  That should come as no surprise after what I wrote in The party starts as Michigan recount begins as ordered.

That a third of precincts in Detroit may be ineligible for a recount is not good news for anyone having their hopes up that this recount will change the result of the election.  If anything, Trump's lead may increase because of it.  It also makes me even less enamored of both Janice Winfrey, the Detroit City Clerk, and Cathy M. Garrett, the Wayne County Clerk.  Neither one of them appears to be running a tight ship, or otherwise these kinds of irregularities would happen so frequently.  If either ever is up for nomination at a Michigan Democratic Convention for Secretary of State, I'm not voting for them and might just see if I could join a group to recruit another candidate.  Barb Byrum in Ingham County or Lisa Brown in Oakland County, the first two counties to participate in the recount, would be my choices.

Winfrey deserved that scare and I hope it makes her run the Detroit City Clerk's office better.  As for the Democratic nomination for Secretary of State, I doubt either Byrum or Brown will be running next year.  Jocelyn Benson, who ran for the office in 2010, is running again.  I already plan on voting for her, both at the convention and in the general election.

There is more good news from Grand Rapids, as reported by WOOD-TV: Nov. 7 election: Millages, Kzoo and GR leaders.

The big races on West Michigan ballots Tuesday included a number of operating millages, as well as elections for city leaders in both Grand Rapids and Kalamazoo.

Longtime readers of this blog should remember that I started political coverage here by following the Troy Library Millage in 2011, so it should not surprise them that I'm thrilled that the library millage passed overwhelmingly.  The same is true of the transit millage for Rapid.  I covered that in 2011 the last time it was up for a vote.  Along with the school millage passing, it was a good night for sustainability and education in Grand Rapids.

FLINT, MI - Flint Mayor Karen Weaver has survived the recall election against her, according to unofficial results reported by the Genesee County Clerk's office.

In a landslide victory, the Flint mayor pulled ahead in the 18-person mayoral race, snagging nearly 53 percent of Flint's vote, according to unofficial results.

She will now serve out the remainder of her elected term until November 2019.

Finally, news from my old stomping grounds (and beat when I wrote for Examiner.com) in Ann Arbor and Washtenaw County beginning with Washtenaw commissioners celebrate 2-to-1 win for mental health and public safety tax from MLive.

Another victory for sustainability and civilization!

I'm proud that Chip is one of my Facebook friends.