'War for the Planet of the Apes,' 'Coco,' and 'Game of Thrones' biggest winners at Visual Effects Society Awards

In Vox on figure skating, I said I would write about the MPSE Golden Reel Awards.  I even had a title, "'The Shape of Water' and 'Blade Runner 2049' among leading movie nominees at Golden Reel Awards."  Yesterday, I found a passage to quote and even picked out a preview image.*  Today, I woke up, found out that the winners of the Visual Effects Society Awards had been announced on Fat Tuesday and changed my mind.  Hey, this blog is my hobby and I do it for my own edification and enjoyment; if I don't want to do something, I don't have to.

With no further ado, here are the big winners from Deadline Hollywood.

Fox’s War for the Planet of the Apes took four prizes including the marquee Outstanding Visual Effects in a Photoreal Feature.

Now for the rest of the live-action movie winners.

Blade Runner 2049 — which came into the gala tied with Planet of the Apes with a leading seven nominations — was the only other multiple winner of the film side, taking two trophies.

Dunkirk and Guardians of the Galaxy Vol. 2 picked up one win apiece at the Beverly Hilton ceremony hosted for a seventh time by Patton Oswalt.

"Guardians of the Galaxy Vol. 2" won Outstanding Virtual Cinematography in a Photoreal Project for Groot Dance/Opening Fight.  I would have to agree.  That sequence was amazing to behold.  The one non-speculative fiction winner, "Dunkirk," earned an award for Outstanding Supporting Visual Effects in a Photoreal Feature.  I still fully expect it to be nominated as at the Saturn Awards in the Action category, along with all the rest of the winners.

Speaking of winners, Cartoon Brew, where I found the preview image for this entry, had the better coverage of "Coco."

Disney-Pixar’s Coco won all four of the event’s awards that are presented to feature animation: an overall prize for visual effects, as well as honors for animated character, created environment, and effects simulation.

The most-nominated animation film, Despicable Me 3, with five nods, was shut out completely, as was The Lego Ninjago Movie, which had four nominations. That’s hardly a surprise. In the last six years, the Walt Disney Company’s animated films have won 23 out of 24 possible VES animation awards; the sole exception was last year when Laika’s Kubo and the Two Strings slipped away with the overall visual effects award.

I don't know if "Despicable Me 3" losing here and being completely snubbed by the Oscars would be enough to put it over the top at the Saturn Awards.  That happened last year with "Finding Dory."  I do expect it to be nominated.

Deadline Hollywood made an observation about "Star Wars: The Last Jedi."

Speaking of the Disney/Lucasfilm franchise, 2017’s top domestic grosser Star Wars: The Last Jedi came in with four nominations and left the Hilton with … bupkis. Including last year’s surprising VES shutout for spinoff pic Rogue One: A Star Wars Story, that means the behemoth series is 0-for-11 nominations in the past two years. This after The Force Awakens dominated the 2016 VES Awards.

I don't think "The Last Jedi" will win anything at the Oscars this year, either.  The Saturn Awards will be a different story.

That's it for movies.  Follow over the jump for the rest of the winners, including "Game of Thrones," which won five of the six awards for live-action television. 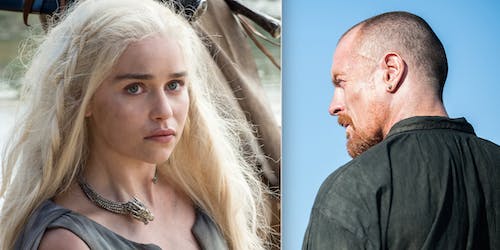 Here's what Deadline Hollywood had to say about the live-action television winners.

The big winner on the TV side, natch, was HBO’s Game of Thrones, which laid waste to its rivals again this year.

Starz’s Black Sails managed to win for Outstanding Supporting Visual Effects in a Photoreal Episode — a category in which Thrones was not nominated.

Zing!  Way to throw shade while congratulating a show.  Still, that's enough to convince me to submit "Black Sails" to the Saturn Awards in the Action/Thriller category.

While "The Last Jedi" came up empty, the Star Wars franchise got some surprise recognition of a sort.

Mark Hamill was a surprise presenter for the top TV prize tonight, to the delight of the crowd. “Wouldn’t it be funny if I opened up the envelope and said, La La Land?” he asked.

I wonder if he said that in his Joker voice.

That's a wrap for the VFX winners for this year.  As one can see from the footnote below, I have a busy week in front of me and that doesn't even include the box office for "Black Panther."  Stay tuned.

*Here is what I had for the Golden Reel Awards:

Baby Driver, Blade Runner 2049, Dunkirk and The Shape of Water lead the feature nominations for the 65th Motion Picture Sound Editors (MPSE) Golden Reel Awards, which will be presented Feb. 18 at the Westin Bonaventure Hotel in Los Angeles.

Members of the sound editing teams on all four films were nominated in the feature categories for music score, dialogue/ADR and effects/foley. All four films are also nominated for the BAFTA for sound, alongside Star Wars: The Last Jedi, which earned one MPSE nomination, for effects/foley.

Nominated for two Golden Reel awards apiece in the feature categories are Coco (animated feature and musical) and War for the Planet of the Apes (dialogue/ADR and effects/foley).

The awards are tonight along with the BAFTA Awards and the Costume Designers Guild Awards.  I have a busy week of announcing winners ahead of me.

**I'm in the middle of a project to determine the best speculative fiction television shows of 2017 according to the awards shows just like I did for documentaries with one point for a nomination and two for an awards.  "Game of Thrones" is well in the lead.  Including these wins, the show now has 68 points!