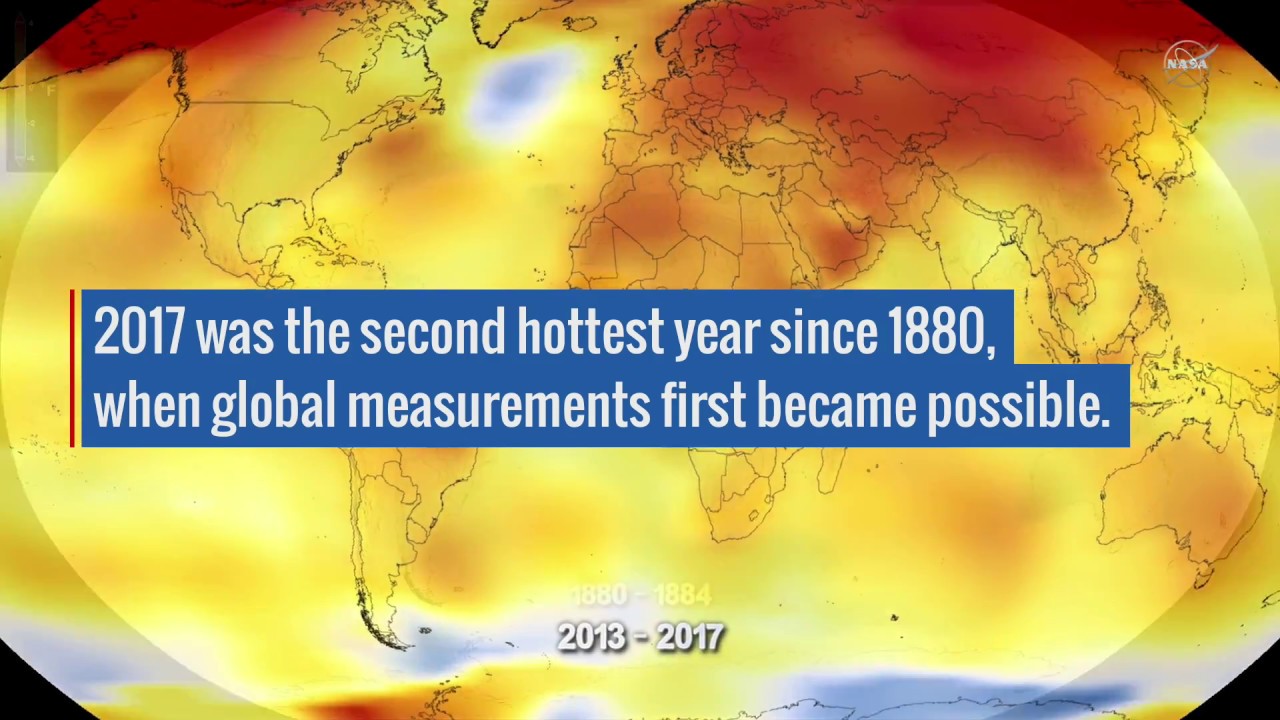 I finished the last post of last month by writing "While I'm done with January, I'm not done with DOOM!  Stay tuned for a post about 2017 in climate change to start February at midnight."  With no further ado, here's NASA reporting 2017 Takes Second Place for Hottest Year.

Earth's surface temperatures in 2017 were the second warmest since since 1880, when global estimates first become feasible, NASA scientists found.
...
Global temperatures in 2017 were second only to 2016, which still holds the record for the hottest year; however, 2017 was the warmest year on record that did not start with an El Nino weather pattern, as the previous two years did. In a separate, independent analysis, NOAA scientists found that 2017 was the third-warmest year in their record. The minor difference is due to different methods to analyze global temperatures used by the two agencies, although over the long-term the records remain in strong agreement.

Follow over the jump for NASA's press release, Climate Central's video on the subject, and my commentary.

Earth’s global surface temperatures in 2017 ranked as the second warmest since 1880, according to an analysis by NASA.

Continuing the planet's long-term warming trend, globally averaged temperatures in 2017 were 1.62 degrees Fahrenheit (0.90 degrees Celsius) warmer than the 1951 to 1980 mean, according to scientists at NASA’s Goddard Institute for Space Studies (GISS) in New York. That is second only to global temperatures in 2016.

In a separate, independent analysis, scientists at the National Oceanic and Atmospheric Administration (NOAA) concluded that 2017 was the third-warmest year in their record. The minor difference in rankings is due to the different methods used by the two agencies to analyze global temperatures, although over the long-term the agencies’ records remain in strong agreement. Both analyses show that the five warmest years on record all have taken place since 2010.

Because weather station locations and measurement practices change over time, there are uncertainties in the interpretation of specific year-to-year global mean temperature differences. Taking this into account, NASA estimates that 2017’s global mean change is accurate to within 0.1 degree Fahrenheit, with a 95 percent certainty level.

“Despite colder than average temperatures in any one part of the world, temperatures over the planet as a whole continue the rapid warming trend we’ve seen over the last 40 years,” said GISS Director Gavin Schmidt.

The planet’s average surface temperature has risen about 2 degrees Fahrenheit (a little more than 1 degree Celsius) during the last century or so, a change driven largely by increased carbon dioxide and other human-made emissions into the atmosphere. Last year was the third consecutive year in which global temperatures were more than 1.8 degrees Fahrenheit (1 degree Celsius) above late nineteenth-century levels.

Phenomena such as El Niño or La Niña, which warm or cool the upper tropical Pacific Ocean and cause corresponding variations in global wind and weather patterns, contribute to short-term variations in global average temperature. A warming El Niño event was in effect for most of 2015 and the first third of 2016. Even without an El Niño event – and with a La Niña starting in the later months of 2017 – last year’s temperatures ranked between 2015 and 2016 in NASA’s records.

In an analysis where the effects of the recent El Niño and La Niña patterns were statistically removed from the record, 2017 would have been the warmest year on record.

Weather dynamics often affect regional temperatures, so not every region on Earth experienced similar amounts of warming. NOAA found the 2017 annual mean temperature for the contiguous 48 United States was the third warmest on record.

Warming trends are strongest in the Arctic regions, where 2017 saw the continued loss of sea ice.

These raw measurements are analyzed using an algorithm that considers the varied spacing of temperature stations around the globe and urban heating effects that could skew the conclusions. These calculations produce the global average temperature deviations from the baseline period of 1951 to 1980.

NOAA scientists used much of the same raw temperature data, but with a different baseline period, and different methods to analyze Earth’s polar regions and global temperatures.

Climate Central used the NOAA data to say 2017 Just Came in as Third Hottest on Record.

2017 finished as the third-warmest year globally since records began (NASA ranked it second-warmest). This is the warmest year on record without an El Niño in the Pacific Ocean.

I'd been telling my students most of last year that 2017 would likely not be warmer than 2016 because there was no El Niño, so this is pretty much what I expected.  The same thing happened after 1998, 2005, and 2010, previous record-setting years with El Niños that ended the next year.  However, 2017 was still the warmest year without an El Niño, so the warming trend is still in place.

Tomorrow is Groundhog Day, when I usually mix science and entertainment to talk about the weather.  This year, I think I'll discuss how John Oliver thinks elections are like Groundhog Day.  Stay tuned.