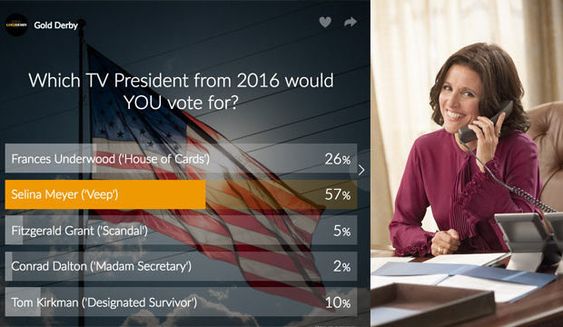 Happy (Not My) Presidents Day!  I'm still in a mood to deal with fantasy instead of reality, so I'm posting the Wall Street Journal's Election 2016: Fake Presidents Edition to mark today's holiday.

The 2016 U.S. presidential campaign season may seem stranger than fiction, but is it really that bad? It could be worse, compared to other American presidents who exist in the reality of our smartphones and televisions.

I don't know if the fictional presidents would be worse.  Selina Meyer is not any worse than Trump in competence and character and she has better staff.  Plus, she's a Democrat.  Fitzgerald Grant also has better staff and really does try to make things better for Americans.  Frank Underwood is a very evil man, but he's also very competent and knows he has to at least been seen trying to make things better for the mass of people, even as he's killing off rival politicians.  None of them are my favorite TV President.  That honor goes to Tom Kirkman of "Designated Survivor."  He is the most decent character of the bunch and he's been learning fast on the job.  Watching him is the next best thing to watching Josiah Bartlett from "The West Wing."*

In the comments, I ask my readers to name their favorite fictional U.S. President.  If I get enough nominations, I'll post my readers' favorites.

*Many of the actors from "The West Wing" made a cameo at my blog in a video I posted first in Examiner.com article on Free Press endorsements and again in Second Year of Crazy Eddie's Motie News: Examiner.com.  The video is still up; I suppose that's because Bridget Mary McCormack will likely be running again this year.
Posted by Pinku-Sensei at 12:00 AM