'The Shape of Water,' 'Get Out,' and 'The Handmaid's Tale' all winners at the DGA Awards After six days of reality, even including the Super Bowl, which served as the Sunday entertainment entry, it's time for some fantasy.  Fortunately, Deadline Hollywood provides some in DGA Awards: Guillermo Del Toro Wins For ‘The Shape Of Water’, ‘The Handmaid’s Tale’ Tops TV — Complete Winners List.

The Directors Guild of America honored outstanding achievement in directing for film and television tonight at the DGA Awards. Guillermo del Toro’s The Shape of Water won the award for Best Feature while Reed Morano walked away with the award for Dramatic Series for The Handmaid’s Tale. Jordan Peele also won big with the First-Time Feature Award for Get Out.

Along with his Golden Globe and PGA award, Del Toro’s DGA win makes him the favorite for Best Director at the Oscars — but Peele’s win still makes him a strong contender.
...
Director Michael Apted received the DGA’s honorary life member award while other HBO won big with Jean-Marc Vallee winning for Big Little Lies and Beth McCarthy Miller for Veep. Matthew Heineman who took his second DGA Award home for his documentary City of Ghosts.

I missed posting an entry for the nominees, so I don't have predictions to review, but after looking at the list from Gold Derby, I can say that speculative fiction had another outstanding night, even if it wasn't a complete sweep.  "The Shape of Water" and "Get Out" were the only speculative fiction nominees for Best Feature Film and both won, albeit in different categories.  The other nominees in the category were "Dunkirk," "Lady Bird," and "Three Billboards Outside Ebbing, Missouri" -- stiff competition that Del Toro should be pleased to beat, repeatedly.  I'm rooting for him to win Best Director at the Oscars. 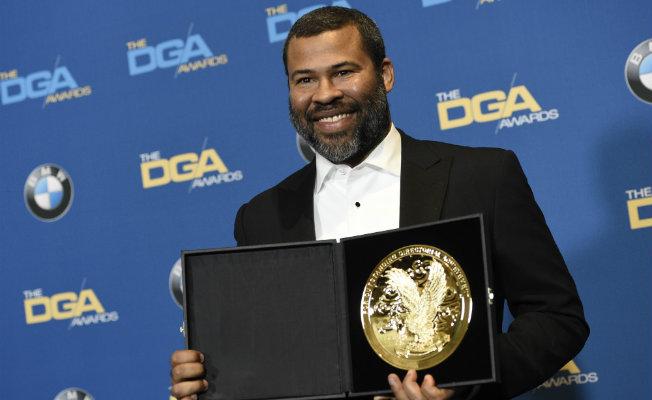 Peele's competition included Geremy Jasper for "Patti Cake$," William Oldroyd for "Lady Macbeth," Taylor Sheridan for "Wind River," and Aaron Sorkin for "Molly’s Game."  "Get Out" was the only speculative fiction film nominated, but it was easily the biggest and best.  My next favorite would have been Sorkin based on his abilities as a screenwriter, but that doesn't necessarily translate into directing ability.

All of the nominees for Best Dramatic Series were speculative fiction, once again showing that the top speculative fiction series are indeed among the best on television.  In addition to "The Handmaid's Tale," where Moreno won for the episode "Offred," the Duffer Brothers earned a nomination for the episode "Chapter Nine: The Gate" of "Stranger Things" and three different directors were nominated for different episodes of "Game of Thrones."  I have a feeling that split the vote, allowing "The Handmaid's Tale" to win and Moreno to be the first woman to win both an Emmy and a DGA Award.  Congratulations!

Speculative fiction missed a fourth award for Children's Programs, as Niki Caro won for the episode "Your Will Shall Decide Your Destiny" from "Anne with an E," the latest retelling of "Anne of Green Gables."  That book is very realistic and has no fantastic elements beyond Anne's imagination.  As for the other nominees, both "The Magical Wand Chase: A Sesame Street Special" and "Just Add Magic" were speculative fiction.  I'd have rooted for "Just Add Magic" but predicted "The Magical Wand Chase: A Sesame Street Special" to win.  I'd have been wrong.  The remaining nominees, both "An American Girl Story: Summer Camp" and "15: A Quinceañera Story: Zoey" were girl's coming of age stories as well.  In competition with "Anne with an E," they lost and the classic won.

I plan on writing about the other winners later, after the WGA Awards are announced.  Right now I wish to point out that one category of film was missing, animation.  The animated films and television shows had their own awards ceremony, the Annie Awards.  I'll be writing about them next.
Posted by Pinku-Sensei at 12:00 AM