John Oliver on primaries and caucuses for Groundhog Day 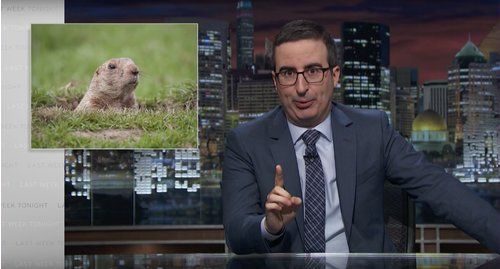 
Tomorrow is Groundhog Day, when I usually mix science and entertainment to talk about the weather.  This year, I think I'll discuss how John Oliver thinks elections are like Groundhog Day.  Stay tuned.

Primaries and caucuses are a surprisingly undemocratic part of the democratic process. John Oliver discusses our convoluted system for choosing presidential nominees.

Entertainment Weekly quoted the conclusion of Oliver's segment, including his action item for his viewers in John Oliver criticizes primary, caucus process for rewarding delegates.


“Unfortunately, we only get angry about the primary process during the primary process, when it’s impacting the candidate we care about, but the middle of the game is the worst possible time to change the rules,” Oliver said, prefacing his idea. “So if everyone is as angry as they say they are right now, let’s together pick a date early next year to actually write an email to the chair of each party and remind them politely to fix this. I propose February 2. Now, that will be easy to remember because it’s Groundhog Day, which does seem appropriate. Because unless this primary process is fixed, we are all destined to live through the same nightmare scenario over and over again, until the end of f—ing time.”

The original day to contact the Republican National Committee (RNC) and Democratic National Committee (DNC) was February 2, 2017, as Inverse pointed out last year and for which a Facebook event was created, but, like Groundhog Day, the campaign can repeat itself until the situation is fixed.  To contact the RNC and its chair Ronna Romney McDaniel, the email is ecampaign@gop.com.  To contact the DNC and its chair Tom Perez, the contact page is here, complete with street address, phone number, and an email contact form.  Happy writing!
Posted by Pinku-Sensei at 12:00 AM