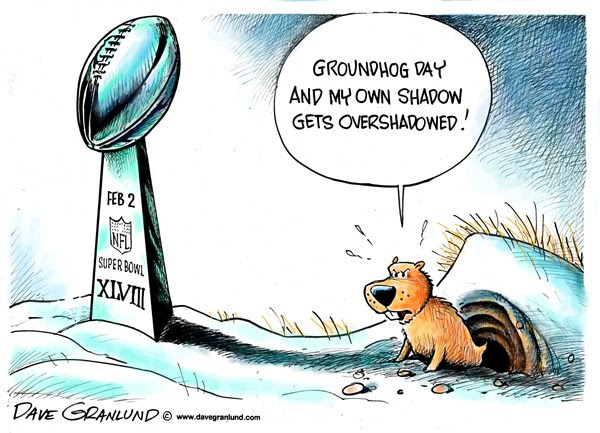 As the AP notes via ABC (and I'm not quoting because its AP) Groundhog Day and Super Bowl Coincide for 1st Time.  It turns out that the flagship university of the state in which Punxsutawney Phil lives covered both events last week.

First, Penn State uses the holiday to engage in some serious biology in Professor sheds light on groundhog's shadowy behavior.

READING, Pa. -- Residents of Pennsylvania look to the groundhog each Feb. 2 to forecast the weather. According to legend, if the groundhog sees his shadow, there will be six more weeks of winter weather; if not, an early spring is predicted. However, most people don't understand the real reason groundhogs emerge when they do, according to Stam Zervanos, emeritus professor of biology at Penn State Berks.

Zervanos has been researching the hibernation patterns of groundhogs for the past 18 years and has found that groundhogs do not simply crawl into their dens and hibernate. Instead they experience a series of torpor (deep sleep) and arousal bouts throughout winter. During arousal, they normally stay in their burrows, but in the spring they emerge and move around above ground. They then return to the den for some more deep-sleeping episodes before the final arousal.

Typically, groundhogs do not exit hibernation for good until early March, which is when they mate. While some episodes of early emergence occur in February, it does not appear that mating occurs during these early encounters.

The Nittany Lions don't have much to say about the game, but they have a lot to say about what people eat during it as the school's PR department asks Why do we love snack food?

Food science experts study why we love chips, chocolate and other famous Pennsylvania foods, and offer expertise to the state’s snack food industry.

Although the Steelers and Eagles didn’t make it to the Super Bowl this year, Pennsylvania and Penn State will still be represented on game day — on your plate. And more likely than not, Penn State experts have had a hand in developing, or evolving, many of the Keystone State’s famous finger foods.

While Nittany Lion alumni will represent Penn State Feb. 2 at MetLife Stadium, Pennsylvania food industries’ wares will be served at Super Bowl parties nationwide. Companies from around the commonwealth — referred to as the snack food belt — supply many of the Sunday afternoon munchies enjoyed while calling plays from the couch.

If your potato chips are from Utz, Middleswarth, Martin’s, Snyder’s of Hanover or Snyder of Berlin — just to name a few — the snack came from some region of Pennsylvania.

No thanks.  I'm on a diet.  Pass the veggie plate, please.

I have one more Super Bowl themed entry planned, but first I'm going to do my best groundhog impression and crawl back into my hole for a few more winks.  See you!
Posted by Pinku-Sensei at 10:31 AM