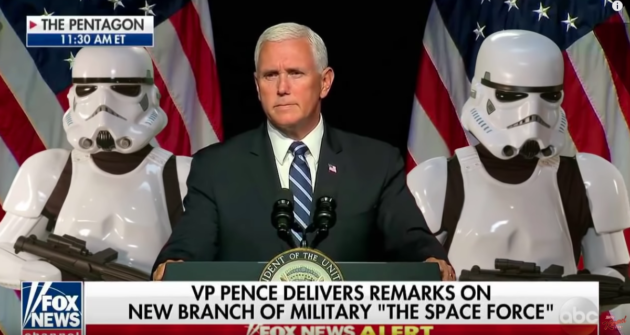 It's National Presidential Joke Day, for which I promised "some late night humor at Donald Trump's expense" when I concluded Pence on Space Force plus space law from Vintage Space, a Veep Day bonus.  It turns out that Veep Mike Pence's announcement about Space Force provided the perfect subject matter for today, which is "a day to recognize the humor often found and yet not so appreciated in the highest office in the land."

I begin with space enthusiast Stephen Colbert, who first mocked the idea on March 13th of this year, when he included Trump Presents 'Space Force: Episode Dumb' in his monologue.

The way Colbert shouted out "Space Force" reminded me of the music I heard in my head the first time I read about the idea, the theme from "Space Ghost."


I'm surprised the band didn't play the theme.  Then again, the members may be too young to know it.

Just as he did for From Russia to the NRA with love, Jimmy Kimmel had both a skit and the best video description of the bunch in Join the Space Force!

It looks like President Trump's space force might actually happen. Secretary of Defense James Mattis who was reportedly not on board with the idea originally, said he fully supports the creation of a new branch of the military in space. While there is no word on when the Space Force might get up and running, the recruitment process has already begun.

Kimmel wasn't done lampooning the idea, as the next day he Trump's Space Force Gets Celebrity Endorsement.

Vice President Pence made it official calling for the formation of a new and exciting branch of the U.S. military called Space Force. The funny thing is, Space Force isn't even an original idea. We did some research and found out there was a TV show in the 70's called 'Space Force' starring Fred Willard who we discovered is excited to reenlist.

That's almost as good as Colbert's monologue.  It helps that ABC is owned by Disney, so of course "Star Wars" gets used.

Even Jimmy Fallon got into the act with VP Pence Pitches Space Force to Pentagon - Monologue.


I thought his material about Rudy Guiliani and Omarosa was even funnier.

Of course, if Fallon made a joke about Space Force, Seth Meyers, who is more critical of Trump and his adminstration, did, too, in Trump's Space Force, Auntie Anne's Pumpkin Spice Pretzels - Monologue.


All of the above comedians joked about Space Force this week.  Other than Colbert, they didn't seem to have talked about it on air before.  However, Trevor Noah of the Daily Show got the jump on all of them except Colbert by broadcasting two segments on it last month.  He began with The Truth About the Space Force - Between the Scenes | The Daily Show.

Trevor speculates about why Donald Trump wants a space force so badly.

The next week, Noah followed up that bit the with In Trump’s Universe, Everyone Loves “Space Force” | The Daily Show.

Michael Kosta heads to a Trump rally in South Carolina to find out how MAGA fans feel about President Trump’s proposal to add a Space Force to the military.

I suspect Trump's followers need education on NASA.  Too bad only a few of them read my blog.  If nothing else, their comments would be a step above spam.

Every branch of the Armed Forces has their own anthem, and the most smartest branch of all should be no exception. Performed by the Young New York Chorus.

I like it.  If nothing else, it beats the theme to "Space Ghost."

Finally, all of these shows have been nominated for Creative Arts and Primetime Emmy Awards.  I'll be sure to post an entry about them in the near future.
Posted by Pinku-Sensei at 12:09 PM