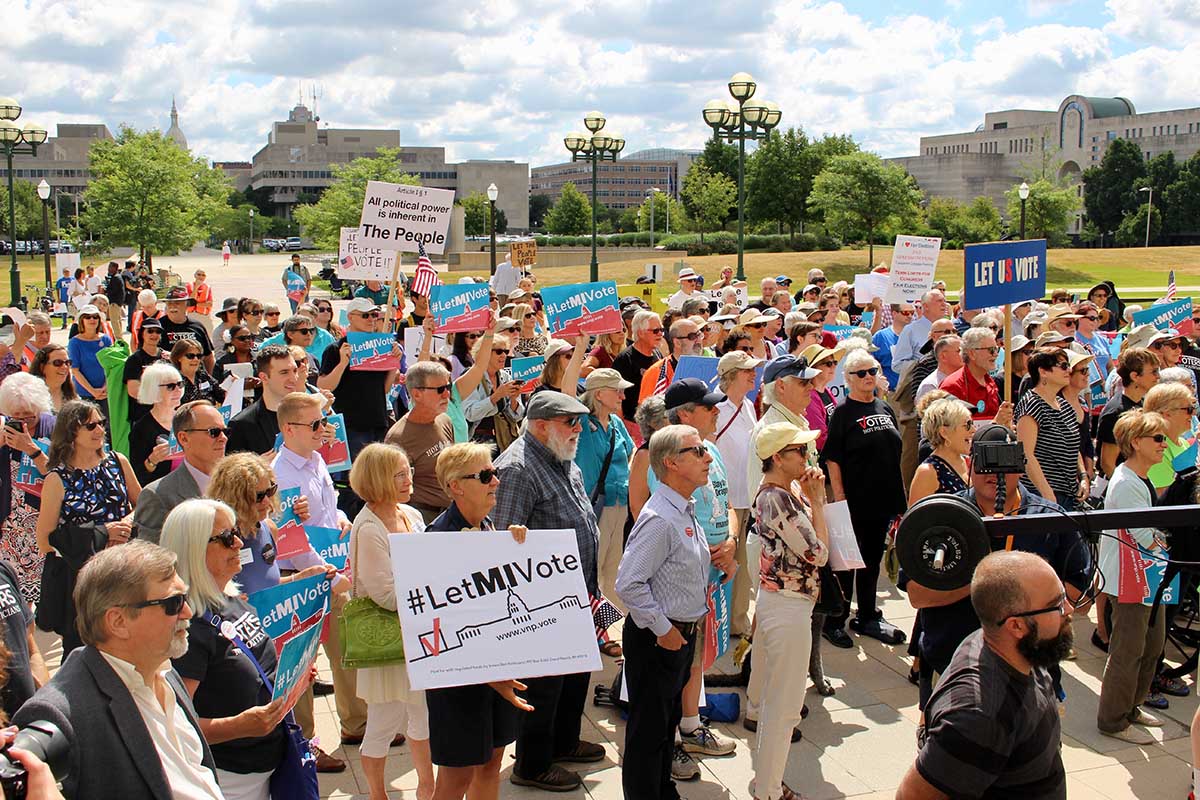 When I wrote Voters Not Politicians explains gerrymandering in Michigan last November, I was planning on following up soon thereafter.  Instead, I just mentioned it six months later in Political reform for the seventh year of Crazy Eddie's Motie News with no update.  I have one today, as WXYZ reported last night Michigan Supreme Court allows gerrymandering vote on November ballot.

The Michigan Supreme Court ruled 4-3 on allowing Michiganders to vote on gerrymandering. If the ballot measure is passed in November, a bipartisan commission would be in charge of redrawing district lines.

WOOD-TV had more in Last challenge to anti-gerrymandering initiative fails.

When it comes to Michigan's legislative and congressional boundaries, there are few straight lines.

Once again, as I've written before, "while WOOD-TV focused on expert analysis, WXYZ went with their strength, reactions from people on the street."  This is one of the reasons why I subscribe to both stations on YouTube and why I try to use videos from both outlets on my blog.

"Because VNP's proposal would leave the form and structure of the government essentially as it was envisioned in the 1963 constitution, it was not equivalent to a new constitution and was therefore a permissible amendment," the justices ruled in a 4-3 decision.

Voting in favor of placing the proposal on the ballot were: Justices David Viviano, who wrote the decision, was joined by Elizabeth Clement, Richard Bernstein and Bridget McCormack.

The majority opinion said the proposal does not substantially change the powers of the three branches of government and the proposed commission is "materially similar to the commission provided for" in Michigan's 1963 Constitution. That commission became inactive after the court determined it couldn't be separated from redistricting standards ruled unconstitutional by the U.S. Supreme Court.

"The present constitution does not accord the Legislature any role in the redistricting or apportionment process; instead, as in VNP’s proposal, a commission is placed in charge," the majority opinion state, adding that other states have also changed how legislative lines are drawn through ballot proposals.

Viviano and Clement were both named to the bench by Republican Gov. Rick Snyder. Bernstein and McCormack are the court's only two Democratic nominees.

Clement's vote to allow the proposal to remain on the ballot may hurt her later this month, as the Free Press observed Michigan GOP could drop support for judge over gerrymandering vote.

Will the Michigan Republican Party withdraw its planned nomination of Michigan Supreme Court Justice Elizabeth Clement at its August convention, as a rebuke for her vote late Tuesday to put an anti-gerrymandering proposal on the Nov. 6 ballot?

Might the party even nominate another judicial candidate in her place?

Those questions were front and center Wednesday in the wake of Tuesday's late-night, 4-3, decision by the Michigan Supreme Court involving the controversial proposal.

Failing to re-nominate a sitting office-holder?  The last time that happened, the Michigan G.O.P. replaced State Board of Education member Nancy Danhof with Todd Courser, who lost in November.  If I were still a political reporter, that would be interesting to cover.

That written, trying to replace Clement may not have quite the effect the conservative activists and delegates expect, as the Free Press went on to say "The Republican Party could nominate another candidate in place of Clement, though she would remain on the ballot as an incumbent justice."  She would still be favored in November, so it would hardly be worth doing.  That might not stop them.  If the delegates at the Michigan Republican Convention actually do this, I'll write about it, just like I will continue to follow stories about redisticting and gerrymandering.  Stay tuned.
Posted by Pinku-Sensei at 12:00 AM