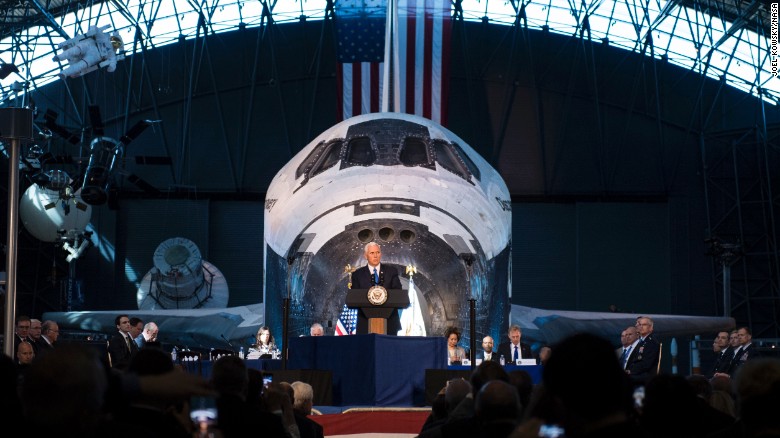 I was planning on letting John Oliver on Mike Pence for National Veep Day be the only entry to celebrate National Veep Day, but Pence actually did something worthy of my notice today, outline plan for new Space Force by 2020.*  Watch the CBS News report.

This announcement allowed me to fulfill the promise I made at the Join the Coffee Party Movement Facebook page to update U.S. Space Corps and Orion -- rejected ideas for Moon Day when I shared Commercial spaceflight crews announced and testing for return to Moon as NASA celebrates its 60th anniversary.  Never say I don't respond to reader requests.

Another reader noted that this is likely to be in violation of international law, so I promised to mention that in any update.  I'm doing better than just note it; I'm sharing Vintage Space's Who Owns Space? A Primer on Space Law!


Sure enough, Amy Shira Teitel mentioned that no weapons are allowed to be stationed in space, so an actual armed presence would violate international law.  The Space Force would have to operate without them to comply.  Also, Amy did a shout-out to "The Expanse" — SyFy sponsored this episode.

I'll continue to follow this story and post updates when I find them noteworthy.  Until then, stay tuned for an entry on Russian infiltration of the NRA that I promised at the end of WUSA and CNN report on likely Russian election interference and the Administration's conflicted response followed by some late night humor at Donald Trump's expense for National Presidential Joke Day.

*Thank you, Mr. Vice President, you prompted me to post two entries on the same day, something I haven't done since July 4, 2016, as I noted in A belated World Population Day 2018.  I wasn't planning on doing that until October at the earliest.
Posted by Pinku-Sensei at 4:07 PM