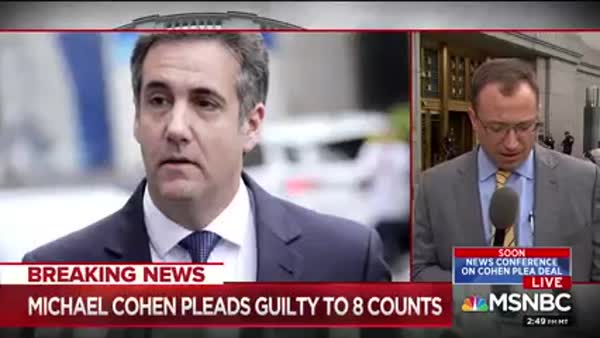 Trump’s former personal lawyer pleaded guilty to two counts of campaign finance violations related to hush money he paid to women accusing the president of extramarital affairs.
...
Michael Cohen, former personal lawyer and fixer for Donald Trump, has admitted that he violated campaign finance laws when he paid $130,000 to adult film actress Stormy Daniel in the weeks before the 2016 elections.

Now that Cohen pleaded guilty on eight federal charges, including two campaign finance violations, the biggest unanswered question is whether the president will also be held accountable.

In all my coverage of candidate and then President Trump, I've written about his being too chummy with Vladimir Putin and Russia, how bad he is for climate, energy, and the environment, his punitive actions on immigration, his penchant for conspiracy theories, and how he generally increases risk of disaster.  I have even blogged about Trump's sexism, but I couldn't find an example of my mentioning Trump in a sex scandal.  Today, that changed, not because of the sex, but because of the campaign finance violations.  Sex and Trump, boring — Courser and Gamrat were more interesting.  Trump violating campaign finance laws — that's worthy of notice.

Cohen plea was not the only conviction of one of Trump's former associates.  NBC News reported Paul Manafort Convicted On 8 Counts; Mistrial Declared On 10 Other Charges | NBC Nightly News.

I plan on following the next trial, too.  Stay tuned as the scandal continues.
Posted by Pinku-Sensei at 12:00 AM