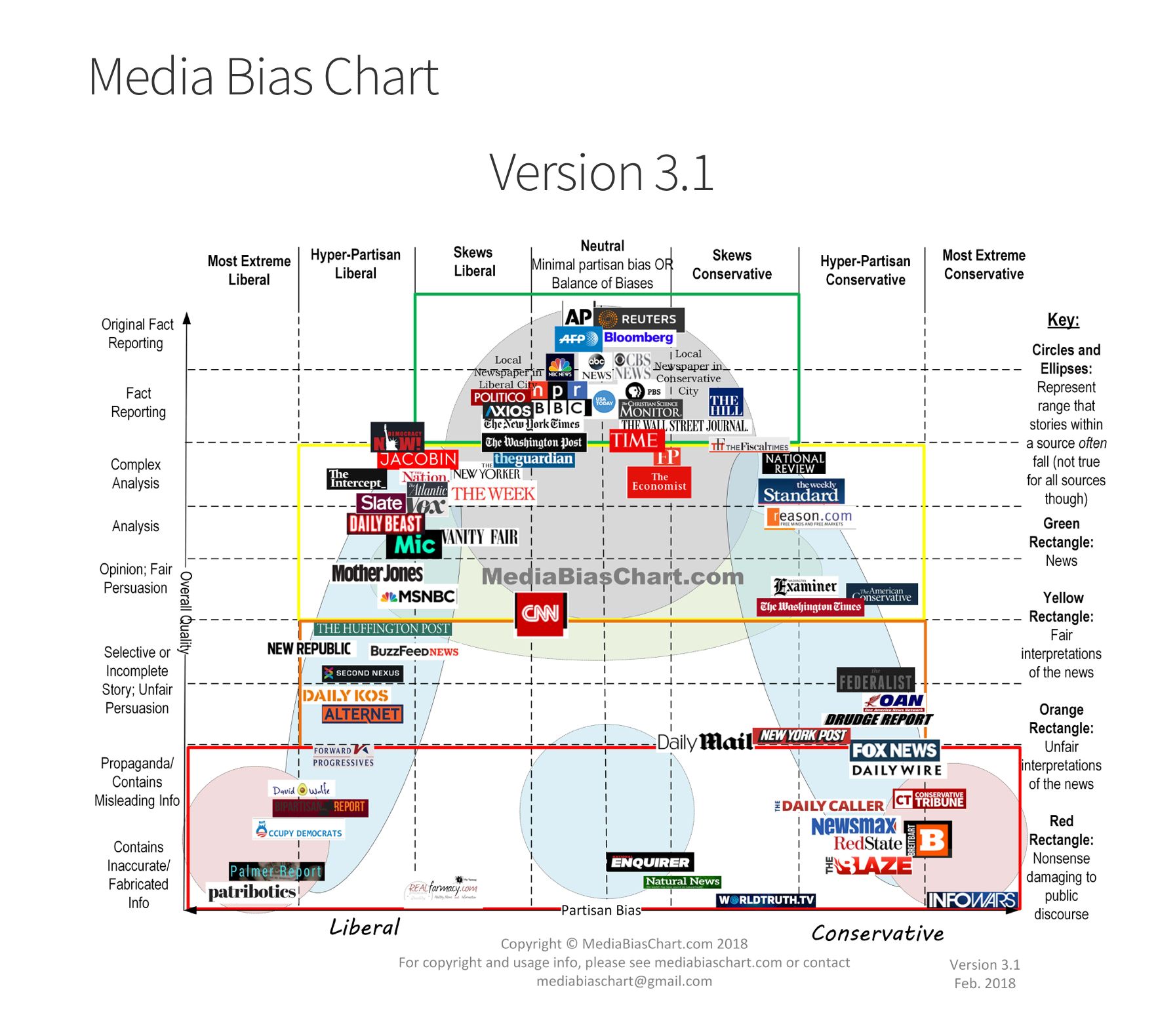 In Alex Jones removed from Facebook, Apple, YouTube, and Spotify, prompting free speech concerns, I mentioned the Media Bias Chart (above), which rates news sources on their bias and quality.  The next day, FiveThirtyEight displayed another chart about media bias from Nieman Labs that showed Democrats see most news outlets as unbiased. Republicans think they’re almost all biased.  After seeing both, I thought it would be interesting to compare the two to see if they agree and if they share any common patterns.  Besides, I've found it's a good idea to listen when the universe is talking.

The first chart from Nieman Labs displays "'net bias' scores for news organizations: 'the percentage who see each as ‘not biased at all’ or ‘not very biased’ minus the percentage who see each as ‘extremely biased’ or ‘very biased.’ On this measure, positive scores indicate that more people consider the news source unbiased than biased, and negative scores mean more people consider it biased than unbiased.'"

The news sources with positive scores in this study all fit in the green top box of the Media Bias Chart as "fact reporting" and "original fact reporting," although the order differs; the Media Bias Charts ranks the Associated Press highest, followed by ABC News and CBS News, then NPR and PBS, followed by USA Today then The Wall Street Journal.  However, three sources that the Media Bias Chart displays in the green box as quality outlets, NBC News, The New York Times, and The Washington Post, all have negative scores.  Both The New York Times and The Washington Post fall in the "skews liberal" column, while NBC sits at the left end of the three broadcast networks, although still in the "minimal partisan bias or balance of biases" column, so conservatives may see them as biased despite the quality of their reporting.  To test that, I'm sharing charts of the perceived biases of news sources side-by-side with the results from Democrats on the left and Republicans on the right. 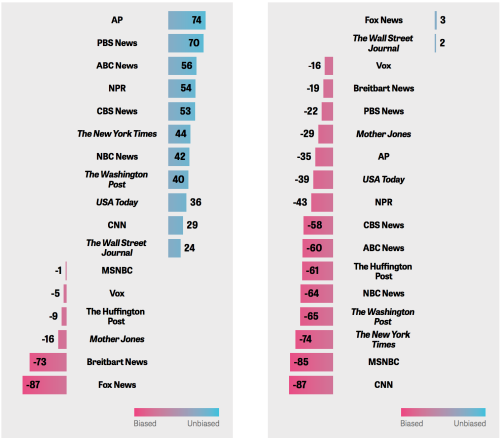 
“Democrats, including Democratic-leaning independents, tend to see most news organizations as unbiased, except for Fox News, Breitbart News, Mother Jones, the Huffington Post, and Vox,” the authors write. “Republicans, including Republican-leaning independents, tend to see all news organizations as biased. The two exceptions are Fox News and The Wall Street Journal.”

Sure enough, Republicans think that NBC News, The New York Times, and The Washington Post are all very biased, while Democrats consider them relatively unbiased.  In addition, Republicans appear to be picking up the slight differences in bias among other news sources.  Of the outlets with positive ratings, The Wall Street Journal skews conservative, while PBS, CBS News, and ABC News are all arrayed from right-to-left in the top center box, exactly the same order in which Republicans rate them as being biased.  In addition, the Media Bias Charts shows the Associated Press slightly to the left of PBS, which could be enough to flip their order on the chart from Nieman Labs of net bias.  All this is enough to make me conclude that for fact-reporting sources, slight differences in ideological slant are enough to affect their perceived bias by readers and viewers.

For sources that fall in the analysis, opinion, and propaganda boxes, ideological positions appear to be less important than the quality of reporting.  Both Democrats and Republicans think Vox and Mother Jones are biased, but Republicans think that CNN is more biased than either, while Democrats rank it between USA Today and The Wall Street Journal.  Looking at the Media Bias Chart might explain why.  While CNN is only as far left as The New York Times and Washington Post, it straddles the line between fair and unfair interpretations of the news, so its quality of reporting is rated lower than Vox, Mother Jones, and MSNBC, all of which present fair interpretations of news according to the Media Bias Chart while still in the "skews liberal" and "hyper-partisan liberal" columns.  The Republicans seem to pick up on this, rating CNN as the most biased news source, even more so than MSNBC, which makes no effort to hide its liberal leanings, especially in its evening shows.*  Both liberals and conservatives consider The Huffington Post as biased, an assessment the Media Bias Chart agrees with.  It also considers its reporting to be unfair interpretations of the news, so its lower quality places it below CNN on a survey of all respondents.  Finally, the most biased sources overall are Breitbart News and Fox News, which are both "hyper-partisan conservative" and "nonsense damaging to public discourse."  Democrats drive that rating of Fox News, as they consider it the most biased news source, while Republicans consider it the least.  The power of ideology returns!  At least both sides agree that Breitbart is biased.  That's reassuring.

*I think they are right to consider it biased, but I think it's a personal bias against Trump, not an ideological bias against conservatives.
Posted by Pinku-Sensei at 11:29 AM