Regular readers of this blog should know that I am no fan of Alex Jones.  When I first mentioned him on this blog, I called him a "tinfoil hat wearer" and later wrote "Here's to everyone, including Trump, learning that the voices in Alex Jones' head are not reliable sources."  So it should come as no surprise  that I reservedly welcome the news that Alex Jones and Infowars have been removed at least temporarily from Apple, Facebook, Spotify, and YouTube.  I begin with CBS Los Angeles reporting on the story.

I did say my support was reserved.  That's because the restriction on speech on social media imposed on Jones could expand to affect me and people who agree with me.  I'm not alone in thinking that.  CNN's Oliver Darcy expressed those sentiments, too.

Despite my reservations, I think these actions are generally beneficial, as the Media Bias Chart describes InfoWars as "utter garbage/conspiracy theories" and "nonsense damaging to public discourse."   I agree with both descriptions. 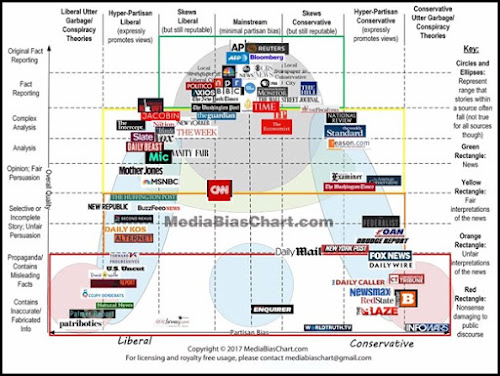 Finally, I can't resist having some fun with this news.  The time I wrote about a notorious media figure who promoted conspiracy theories in R.I.P. Art Bell, I dedicated a song by Muse to his fans along with my mixed opinion of the band.


On the one hand, they're brilliant musicians.  On the other, they're complete tinfoil-hat wearing kooks.  Here is a song about a notorious conspiracy theory, MK Ultra, which is about CIA mind control....The next time I post this, it will likely be the UCLA Band version.  I can never get too far away from movies or marching band with my music.

I wish to thank Alex Jones for giving me an opportunity to feature the UCLA Band, which I marched in 40 years ago.  It shows that no one is completely useless.
Posted by Pinku-Sensei at 9:28 AM