2018 on track to be fourth-warmest ever 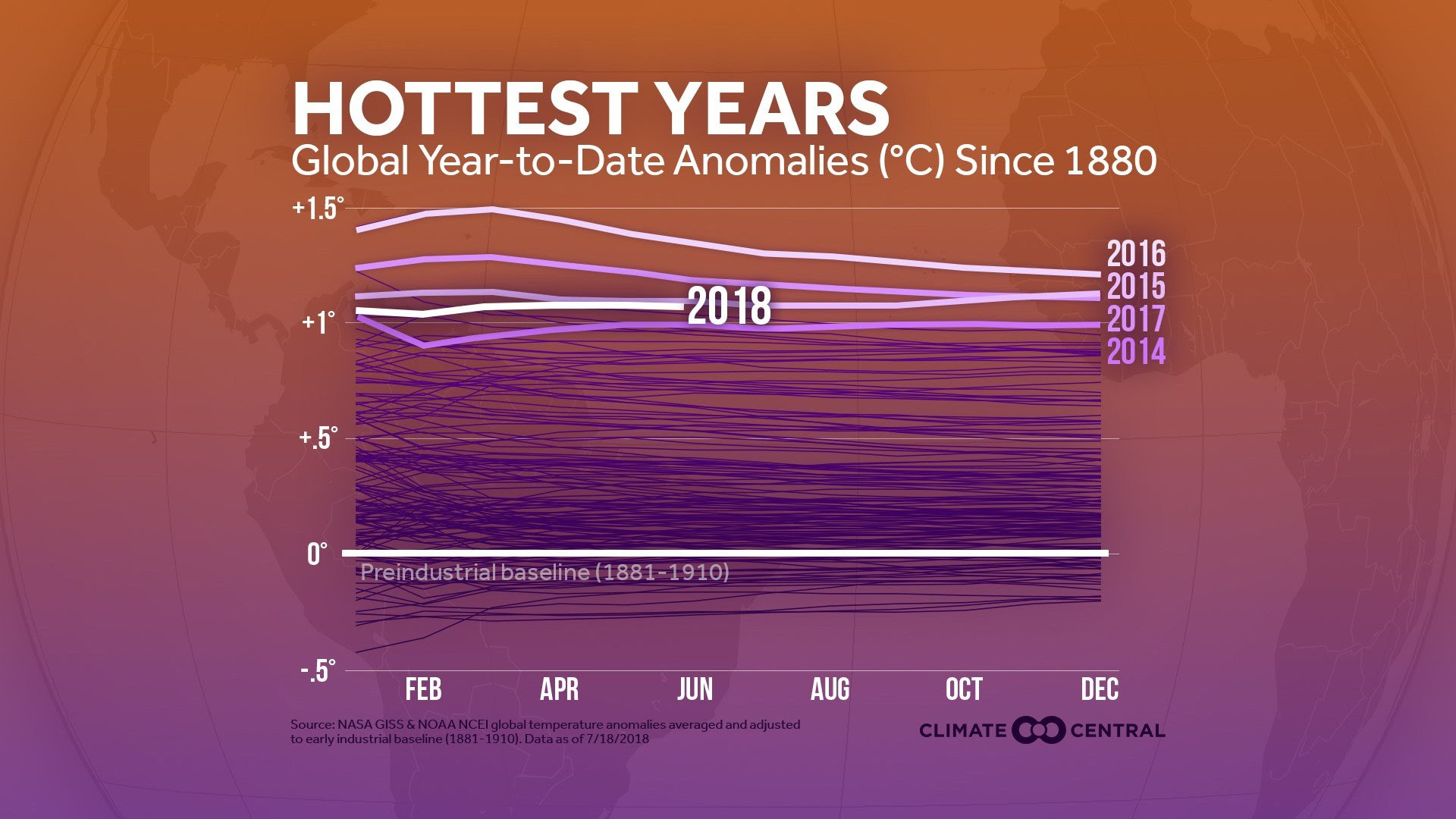 When I last checked in on climate and weather extremes, I reported Record heat scorches southern California and the rest of the Northern Hemisphere.  That hot summer has continued and the result is that 2018 Is Shaping Up to Be the Fourth-Hottest Year. Yet We’re Still Not Prepared for Global Warming according to the New York Times.

This summer of fire and swelter looks a lot like the future that scientists have been warning about in the era of climate change, and it’s revealing in real time how unprepared much of the world remains for life on a hotter planet.

The disruptions to everyday life have been far-reaching and devastating. In California, firefighters are racing to control what has become the largest fire in state history. Harvests of staple grains like wheat and corn are expected to dip this year, in some cases sharply, in countries as different as Sweden and El Salvador. In Europe, nuclear power plants have had to shut down because the river water that cools the reactors was too warm. Heat waves on four continents have brought electricity grids crashing.

And dozens of heat-related deaths in Japan this summer offered a foretaste of what researchers warn could be big increases in mortality from extreme heat. A study last month in the journal PLOS Medicine projected a fivefold rise for the United States by 2080. The outlook for less wealthy countries is worse; for the Philippines, researchers forecast 12 times more deaths.

Globally, this is shaping up to be the fourth-hottest year on record. The only years hotter were the three previous ones. That string of records is part of an accelerating climb in temperatures since the start of the industrial age that scientists say is clear evidence of climate change caused by greenhouse gas emissions.

About the only good news is that this year will be cooler than 2017, the second hottest year on record according to NASA.  That's the global picture.  A lot of localities will see new high temperature records set.  Newsy reported on one of them, July was California's hottest month on record

That was July.  The heat has continued in my old home town of Woodland Hills, where CBS Los Angeles reported from there about triple-digit temperatures.

People were out and about trying to figure out how to cope with SoCal's most recent heat wave. Lisa Sigell reports.

Hey, I swam in that pool as a kid, so this report literally hits home.  Also, I don't remember heat waves this bad or this frequent growing up, so things have definitely changed.

Speaking of heat waves, one is hitting Europe as well.  The New York Times reported on that in Scorching Summer in Europe Signals Long-Term Climate Changes.

In Northern Europe, this summer feels like a modern-day version of the biblical plagues. Cows are practically dying of thirst in Switzerland, fires are gobbling up timber in Sweden, the majestic Dachstein glacier is melting in Austria.

In London, stores are running out of fans and air-conditioners. In Greenland, an iceberg may break off a piece so large that it could trigger a tsunami that destroys settlements on shore. Last week, Sweden’s highest peak, Kebnekaise mountain, no longer was in first place after its glacier tip melted.

Southern Europe is even hotter. Temperatures in Spain and Portugal are expected to reach 105-110 degrees Fahrenheit this weekend. On Saturday, several places in Portugal experienced record highs, and over the past week, two people have died in Spain from the high temperatures, and a third in Portugal.
...
“In the past, we had this kind of heat wave once every 10 years, and now we have them every two years or something like that,” said François-Marie Bréon, a climatologist and deputy director of the Laboratory of Climate and Environmental Science, a research institute affiliated with France’s National Center for Scientific Research. “That’s really the sign of climate change: We have heat waves that aren’t necessarily more intense but that are more and more frequent.”

Words are one thing, but images are another.  To see them, watch Europe sizzles as heatwave continues from Euronews, which came out after the New York Times article.

All of that is in the present.  What about the future?  Euronews has an answer to that in Heatwave Deaths: Global study predicts dramatic increase in fatalities.

Not only is climate change here, but it's going to get worse.  Unless people prepare and try to decrease greenhouse gas emissions, thousands more will die every year from heat waves, to say nothing of the other effects of increasing temperature, changing rainfall, and rising sea levels.
Posted by Pinku-Sensei at 9:45 AM