Gymboree closing 805 stores and selling off Janie and Jack, a tale of the Retail Apocalypse 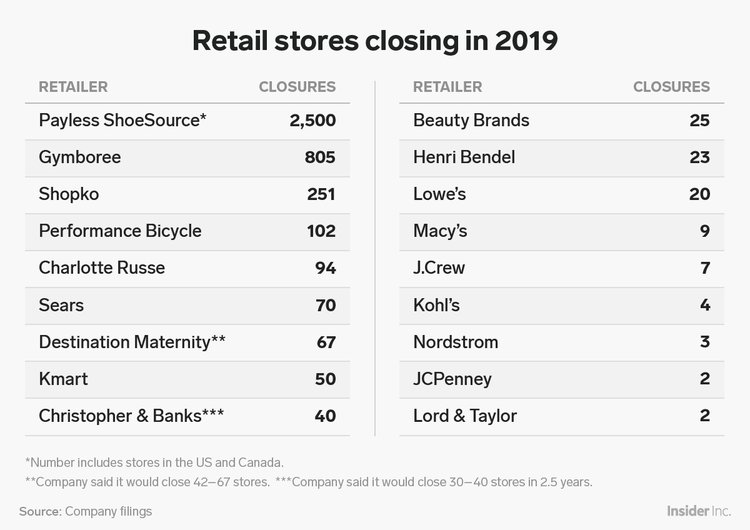 In the previous installment of Tales of the Retail Apocalypse, I wrote that Payless ShoeSource is closing all of its U.S. stores.  I also mentioned the other chains that filed for bankruptcy this year.


When I wrote, "the Retail Apocalypse continues, as...Claire's, Brookstone, NineWest, and The Walking Company...declar[ed] bankruptcy last year, [while] Shopko and Charlotte Russe filed for bankruptcy protection this year, and 2019 is still young," I was not kidding.  I expect more retail bankruptcies and liquidations in the months to come, even before the next recession begins.

As the graphic from Business Insider above shows, I missed the second largest retail bankruptcy so far this year, Gymboree.  WXYZ reported last month Gymboree expected to close most of its remaining stores.

Children's clothing retailer Gymboree, which also operates Crazy 8 and Janie and Jack, is expected to file for bankruptcy this week and close most of its remaining 900 locations this year, CNBC [reports.]


The old adage about history repeating itself isn't, ideally, supposed to apply to retailers that file for bankruptcy. Yet Gymboree — which filed for Chapter 11 in June of 2017 and exited in September that same year — is once again in court, this time with a more drastic plan: to sell Janie and Jack and the online IP of Gymboree, and to shutter Crazy 8 and Gymboree stores.
...
The fate of Gymboree, while not entirely decided, seems likely to follow lines similar to these: an online-only Gymboree and a stronger competitor for whoever lands the high-end portion of the market through Janie and Jack. There could also be wholesale opportunities for Gymboree thanks to the value of the brand, [managing director and senior equity research analyst at B. Riley Financial Susan] Anderson said, but she doesn't expect to see a future buyer open Gymboree stores any time soon.

With a primarily online presence in its future, Gymboree will be leaving the children's apparel market open for its competitors — and many of them will likely benefit from the retailer's second filing.

"Children's Place definitely has some of the best opportunity, given their core customer is really paying the same rate and they have some nice overlap," Anderson said. "They're definitely going to be a big beneficiary. But then I think it's kind of just spread everywhere — Gap, Abercrombie Kids, Target, Walmart, Old Navy, private labels at the department store. I think there's opportunity for kind of a lot of people to pick up share."

Customers will still be buying clothes for their children; they just won't be doing so at Gymboree stores, because there won't be any after this year.

As for the next installment of Tales of the Retail Apocalypse, I expect it will be Charlotte Russe, Shopko, or whichever other chain Retail Archeology or Company Man decides to cover.  That will be after I return to the Razzie Awards and dramatic films about government and politics in preparation for the Academy Awards.  Stay tuned.
Posted by Pinku-Sensei at 1:38 PM