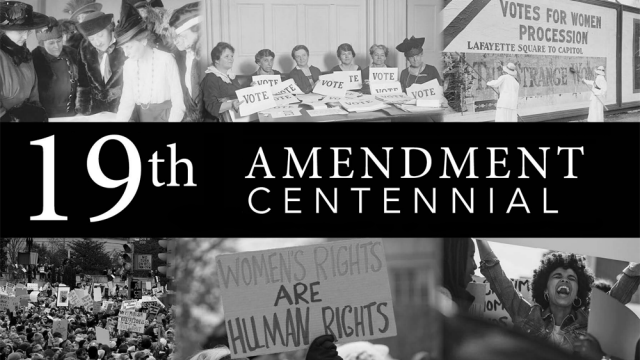 In 1920, women in the U.S. gained the right to vote - but only after a struggle that lasted more than 70 years! Learn how suffragists fought for the 19th amendment.

The History Channel outlined the timeline of the passage of the 19th Amendment on its website.

On May 21, 1919, U.S. Representative James R. Mann, a Republican from Illinois and chairman of the Suffrage Committee, proposed the House resolution to approve the Susan Anthony Amendment granting women the right to vote. The measure passed the House 304 to 89—a full 42 votes above the required two-thirds majority.

House Speaker Nancy Pelosi hosted a reception to mark the 100th anniversary of the House of Representatives passing the 19th Amendment to the U.S. Constitution, which guaranteed women the right to vote. "Women weren't given anything. Women earned, worked for, marched, fought, starved, were starved, sacrificed everything for expanding freedom in our country. Since the birth of our democracy women have not waited for change but have worked for change."

The History Channel described the next step.

Two weeks later, on June 4, 1919, the U.S. Senate passed the 19th Amendment by two votes over its two-thirds required majority, 56-25. The amendment was then sent to the states for ratification.

Here is Senator Mitch McConnell reciting the history of the passage in the Senate in McConnell Commemorates 100th Anniversary of Women’s Right to Vote.

U.S. Senate Majority Leader Mitch McConnell (R-KY) delivered the following remarks on the Senate floor regarding the 100th anniversary of the Senate’s passage of the 19th Amendment, giving American women the right to vote.

There will be one more 100th anniversary to celebrate, August 26, 1920, when the 19th Amendment was certified by U.S. Secretary of State Bainbridge Colby.  I hope to remember that date as well.

Stay tuned for the next historic anniversary, the 75th anniversary of D-Day.
Posted by Pinku-Sensei at 9:14 AM