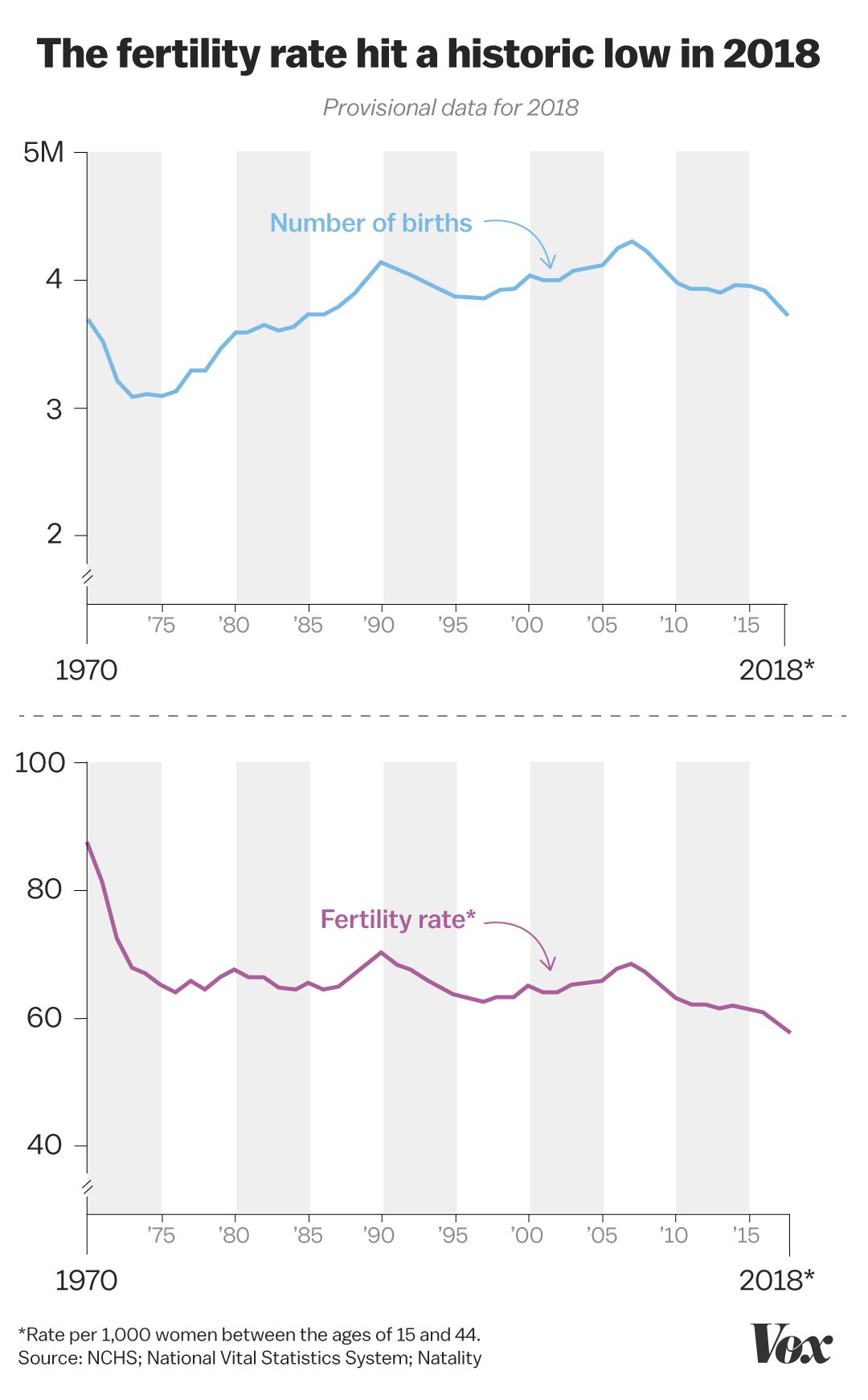 Happy Father's Day!  Just as I did last year, I am "writing about the lower birth rate for Father's Day, even though that is usually considered a concern of mothers.*

America's baby bust isn't over. The nation's birth rates last year reached record lows for women in their teens and 20s, a government report shows, leading to the fewest babies in 32 years. The provisional report, released Wednesday and based on more than 99% of U.S. birth records, found 3.788 million births last year. It was the fourth year the number of births has fallen, the lowest since 1986 and a surprise to some experts given the improving economy.

Gizmodo included even more facts in its article on the subject.

[T]he national birthrate, measured as the number of births per every 1,000 women between the ages of 15 to 44, also took a drop for the fourth year in a row. Overall, the country hasn’t seen this few births since 1986.
...
There’s also been a continuing decline in the fertility rate, defined as the number of children a woman has over her lifetime. In 2018, the rate was 1.72 births per every woman, a decline from 1.76 births in 2017. Experts consider a rate of 2.1 births to be a baseline for ensuring that younger generations can continue to replace the aging population with no problems, a threshold the U.S. has consistently failed to meet for a decade.

I found the CBS News report, while good on the facts, short on analysis.  That's not the case with the following clip from KSNT News from Topeka, Kansas, Report shows U.S birth rate is declining.


In addition to the reasons for the declines among most age groups and increases among older women, the expert from the Cleveland Clinic connects the increase in premature births to the trend towards delayed childbirth.  That's decent analysis of the data.  Still, it misses some of the economic dimensions of both the causes and effects of lower birth and fertility rates.  For those, I turn to Gizmodo.

But there are likely other worrying things that are making pregnancies among women in their 20s less common, namely the lingering after-effects of the Great Recession. Research has consistently linked a struggling economy to fewer births, and in the U.S., this latest decline began in 2008, when the recession hit.

While some people’s financial fortunes (mostly the rich) have since recovered and the economy as a whole is considered healthy, it’s people in their 20s who are often still struggling to stay afloat. And this financial stranglehold is clearly affecting some young adults’ plans for parenthood. A 2018 survey commissioned by the New York Times, for instance, found that nearly two-thirds of adults cited the expenses of child care as a reason for not having children. In fact, it was the most commonly-cited reason.

I first made this point in Next Media Animation thinks low birth rates in the U.S. and China aren't all good eight years ago.  I expected that as the economy improved, birth rates would pick up.  That hasn't happened.

Again, as with the birth rate, this isn’t necessarily a doomsday scenario. Many similarly wealthy countries, such as Canada, have rates even lower than that. In some ways, a lower fertility rate could be viewed as a sign that an industrialized country is doing relatively well. It can mean, as mentioned above, that more women have the reproductive freedom to have (or not have) children at their choosing. The closer the birth rate becomes to that of countries like Greece and Japan, though, the more trouble that could spell in the future, with a growing aging population that can strain a country’s resources and labor shortages.

Women are having fewer babies in developed countries. That's the conclusion of a new global report that warns the current population in some of the world's wealthiest nations can't be maintained at the current birth rate.

I'm ambivalent about this development, as I wrote last year.

I repeated a similar sentiment in my comment on Going South at Kunstler's blog last month.

It always struck me as odd that, if the economy is supposedly so good with a 50-year low unemployment rate, U.S. birth and fertility rates are falling and the fertility rate is at a record low.  The answer is that, as our host pointed out, the economy isn't actually that good because it's unequally distributed.  On the one hand, it's leading us (as in the U.S.) to do our part to slow the growth of population and affluence, the P and A in I (impact) = P * A * T, where T is technology, which ideally could counteract the effects of the other two variables.  On the other, I and other advocates of zero population growth should be careful what we wish for.  We might not like how we get it.

That includes accepting more immigrants to counteract lower population growth and stagnant or shrinking economies.  I'm O.K. with that, but Trump is in office in large part because many Americans are not.

Enough finding a dark lining in a silver cloud.  It's Sunday, so it's time for an entertainment feature.  As I promised on Mother's Day, "I'm saving Star Wars names for Father's Day.  Stay tuned."

*That written, there are "Men Going Their Own Way" (MGTOW) types who are allies of the men's rights advocates (MRAs) that I criticized in Recycled comments about the men's rights movement that are cheering this development in the comments to the videos I posted because it means men are avoiding marriage, fatherhood, and child rearing and support.  They're not entirely wrong factually, although I think they are wrong morally as well as giving themselves and men in general too much credit.
Posted by Pinku-Sensei at 3:48 PM