Democratic presidential candidates from left to center from Voteview 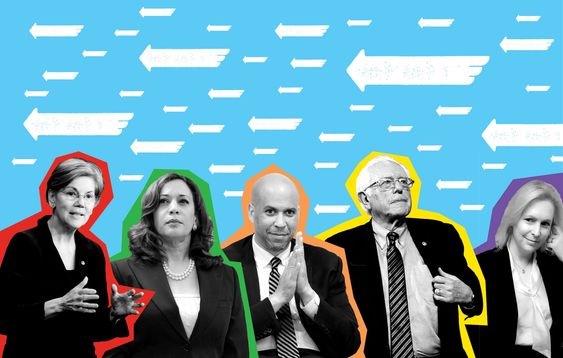 Full-sized original at In These Times.

This past April, I read a tweet describing Tulsi Gabbard and Bernie Sanders as "being objectively further left then the rest of the Dem primary field."  I thought "Really?  I don't think the data supports that claim" and decided to test it with the DW-NOMINATE scores and relative placements from Voteview.com of all the declared candidates for the Democratic nomination who had scores at the time.  Well, it's two months later, more candidates have declared, and the first two Democratic candidate debates are happening at the end of the month, so it's time to convert the scores into a post.


Voteview allows users to view every congressional roll call vote in American history on a map of the United States and on a liberal-conservative ideological map including information about the ideological positions of voting Senators and Representatives.
...
Ideological positions are calculated using the DW-NOMINATE (Dynamic Weighted NOMINAl Three-step Estimation). This procedure was developed by Poole and Rosenthal in the 1980s and is a "scaling procedure", representing legislators on a spatial map. In this sense, a spatial map is much like a road map--the closeness of two legislators on the map shows how similar their voting records are. Using this measure of distance, DW-NOMINATE is able to recover the "dimensions" that inform congressional voting behavior.

The primary dimension through most of American history has been "liberal" vs. "conservative" (also referred to as "left" vs. "right"). A second dimension picks up differences within the major political parties over slavery, currency, nativism, civil rights, and lifestyle issues during periods of American history.

In other words, liberal-conservative scores are calculated in two dimensions using DW-NOMINATE.  The votes are fed into the program and the program assigns scores and maps them out.  There is no human judgment involved so it's about as objective a measure of ideology as I can find.

The maps themselves have been animated to show changes in partisanship over time.  Watch This 60-second animation shows how divided Congress has become over the last 60 years, which is based on a study that used DW-NOMINATE data from Voteview.

It's news to no one that Congress has had a hard time passing legislation in recent years. Some have even asserted that partisanship in Washington has reached historic levels. But how do we put the current divide in perspective? A group of researchers recently tried to quantify and visualize House partisanship in a paper published in PLoS ONE.

That was fascinating, but enough about Voteview and its methods.  Follow over the jump for the ranking from liberal to moderate for the Democratic candidates running for President who are current or former members of Congress.

Before I list the candidates from left to center (all of them are liberal to moderate; no conservatives are running for the Democratic nomination for President), I note that the scores of liberals are all negative and the more liberal they are, the more negative the scores, so the most liberal candidate will have the lowest or most negative score.  That's not an aspersion on liberals; it just makes the people on the left graph on the left on a number line or two-dimensional graph.  Now that that's out of the way, on to the ranking!

The next most liberal candidate is also not Bernie Sanders, but Kamala Harris, who has an ideology score of -0.696, making her more liberal than 97% of Democrats in the 116th Senate and the second most liberal Senator as well.  Harris has moved slightly to the center since April, when her score was -0.702.

Continuing past Bernie to the center of the political spectrum, Voteview lists Kirsten Gillibrand with an ideology score of -0.427.  Despite her moderate history as a House member before she replaced Hillary Clinton as U.S. Senator from New York, she is currently more liberal than 79% of Democrats in the 116th Senate. She has moved left since April, when her score was -0.420.

I'll return to the Democratic Senators running for their party's presidential nomination presently.  It's time to examine the announced candidates from the U.S. House of Representatives, beginning with Tim Ryan, who has an ideology score of -0.403. More liberal than 55% of Democrats in the 116th House.  His score hasn't changed since April.

Julian Castro does not have a DW-NOMINATE score on Voteview, but his twin brother Joaquin does.  Although I admit it's bad technique to use Joaquin's score as a proxy (I wouldn't do this if I were submitting this paper for publication instead of posting it to my blog), I think it would at least place Julian at least close to where he really is on a left to center scale, as well as being entertaining in the name of being as complete as possible.  The Castro in Congress has an ideology score of -0.395, making him more liberal than 50% of Democrats in the 116th House.  I didn't include Joaquin's score among my tweets in April, so I don't know how his score has changed.

Continuing on, Eric Swalwell has an ideology score of -0.365, which is more conservative than 59% of Democrats in the 116th House.  His score has remained constant since April.

Now I begin looking at past members of Congress.  According to Voteview, the most liberal of them is Jay Inslee, current Governor of Washington but a U.S. Representative from 1993-1995 and again from 1999-2012.  He left Congress with an ideology score of -0.330, which was more conservative than 71% of Democrats in the 113th House.

Still looking at past members of Congress, but returning to the Senators running for the Democratic nomination, I come to Joe Biden.  The current leader of the field left the U.S. Senate in 2009 with an ideology score of -0.314, which made him more conservative than 50% of Democrats in the 111th Senate.  In other words, he was ideologically just an average Democratic Senator while he was serving, but he's on the moderate side now, which probably suits him just fine.

I return to former members of the House of Representatives with Beto O'Rourke, who left Congress in January after failing to unseat Ted Cruz with an ideology score of -0.304, which made him more conservative than 85% of Democrats in the 115th House.

Now for the next most centrist of the current members of the House, Seth Moulton.  He has an ideology score of -0.295, which is more conservative than 73% of Democrats in the 116th House.  He has become slightly more conservative since April, when his score was -0.299.

Before I examine the other candidate that inspired me to research candidates' DW-NOMINATE scores, Tulsi Gabbard, I'm looking at someone who says he's running, but isn't really doing anything to get nominated, Mike Gravel.  He left the Senate in 1980(!) with an ideology score of -0.284, which made him more conservative than than 67% of Democrats in the 96th Senate. 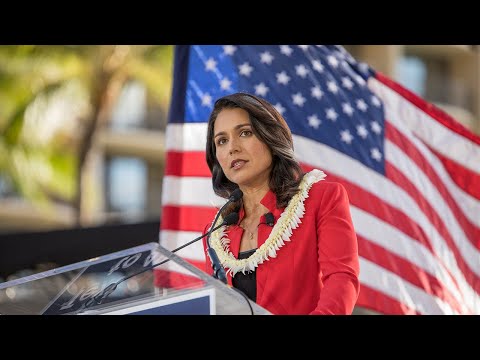 After traversing the political spectrum from left to center and examining a dozen candidate, only now do I get to Tulsi Gabbard.  The other person touted as "being objectively further left then the rest of the Dem primary field."  She has an ideology score of -0.279, which is more conservative than 77% of Democrats in the 116th House as well as more conservative than a dozen other candidates.  Her score has not changed since April.

I have one last former member of Congress to analyze, John Delaney.  He left the House of Representatives early this year with an ideology score of -0.276, which made him more conservative than 85% of Democrats in the 115th House.  Finally, a Democratic candidate cloer to the center than Tulsi Gabbard!

That concludes this look at the past and present members of Congress running for the Democratic nomination from left to center.  However, this won't be the last time I plan on examining the ideology of the candidates.  On The Issues has pages and ideological evaluations of just about all the candidates, including ones who never served in Congress.  Compared to Voteview, it's more complete, but less objective and based on rhetoric, not action as in votes.  Still, ranking the candiates by ideology, and comparing it to their DW-NOMINATE scores, if available, should be both entertaining and informative.

Stay tuned for an entry reporting the winners of the 2019 Environmental Media Association Awards as a Sunday entertainment feature.
Posted by Pinku-Sensei at 4:12 PM